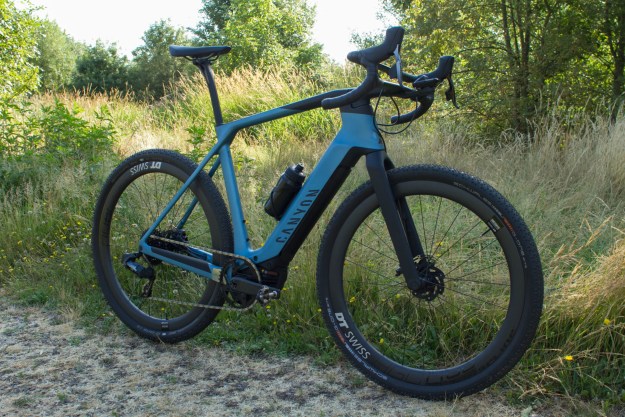 “The Canyon Gravel:ON isn't for the faint of heart, but its top-tier components and insane range are worth your attention.”

Over the last few years, the gravel community has solidified a cycling culture that refuses to be burdened with the unwritten rules of road cycling. This means hairy legs, fat tires, and an emphasis on enjoying the ride and not how quickly you can finish it. E-bikes, while growing with a slightly less distinct community of their own, are more widely accepted than they used to be, simply because they get more people on bikes. While I know there’s a contingent of Lycra-clad elitists that may take issue with both of those statements, e-bikes and gravel bikes are here to stay. I welcome the company.

So, it makes sense that Canyon introduced the Grail:ON, its first entry into the U.S. e-bike market. If you’re not familiar with Canyon, you should be. It makes amazing bikes that are often the best high-end bang for your buck because the company operates through a direct-to-consumer model. This means you won’t see new Canyons at your local bike shop, but don’t worry. An incredible six-year warranty, 30-day return policy, and a simple setup with all the tools included make for a smooth buying experience.

The Grail:ON: What is it, and what’s different?

Born from Canyon’s long-standing gravel favorite, the Grail, the Grail:ON makes more changes than just slapping a motor and battery on and calling it good. And while a bike’s geometry certainly isn’t the sexiest topic to get into, with the Grail:ON, it’s worth mentioning. Canyon took into consideration what throwing a bunch of extra weight and power onto a bike would do, and they modified it accordingly.

This means they thickened the sidewalls of this all-carbon frame to deal with the extra abuse while also lengthening the wheelbase and shortening the stem. These changes translate into an e-bike that is far more nimble than others I’ve ridden. In fact, the smooth and responsive ride had me forgetting at times that I was riding an e-bike at all.

Outside of the frame and motor, the most significant visual difference from other bikes is the Grail:ONs double-decker handlebar. This multilevel drop bar looks part hammerhead shark and part medieval weaponry. While it might look insane, the result is an increase in comfort that you will soon learn to love.

For the Grail:ON, the integrated stem has been shortened, which brings that floating top bar closer to the rider. That means a more relaxed and comfortable riding position. Pulling double duty, the top bar also helps dampen road vibration when things get bumpy. I can attest that I was quite skeptical of these claims, but found myself spending more and more time on top because it took the edge off rough back roads.

Also helping take the edge off bumpy roads are the Grail:ONs tires. Up from 40mm on the Grail to 50mm for the Grail:ON, the Schwalbe G-One Bites are ginormous. When I pulled the Grail:ON from its box, my first thought was that these things were way too big. With a tread pattern just shy of what I’d consider for a mountain bike, the G-One Bites are big, aggressive, and able to ride at only 30 psi. This means loads of traction and extra suspension to soak up bumps, as well as more rolling resistance.

If all you’ll be riding is loose gravel, this isn’t an issue, but if you’re like me and ride 80% paved roads with little bits of gravel mixed in, rolling resistance becomes more of a concern. Much to my surprise, for my first outing, I pumped the front and rear up to 55 psi and was shocked when I found myself cruising at 21 mph. Seeing as the power for the Grail:ON stops at 20 mph, the tires and extra weight were balancing themselves quite nicely.

Where I did notice the Grail:ON’s weight, which is claimed at just over 35 pounds for a medium, was on gravel descents. While I could still throw the Grail:ON around, I was definitely riding the 160mm hydraulic disc brakes a bit harder than usual, and this is where the extra size on the tires really came into play. The same tires that I scoffed at in my living room were coming into their own out in the real world — I was thrilled to have the extra rubber to work with.

The culprit behind the Grail:ONs weight is, of course, the Bosch Performance Line CX motor and removable 500 watt-hour battery. Canyon chose the Bosch unit because it can throw down up to 85Nm of torque, which is just under 63 pound-feet or about what an 800cc motorcycle has.

Unlike motorcycles, the Grail:ON has no throttle — it’s a pedelec, or pedal-assist. This means that when you start pedaling, the motor kicks in and gives you assistance based on your cadence, force exerted, and overall speed. The power from the motor comes in four varieties. Eco Mode is the least powerful, followed by Tour, Sport, and the undisputed king of hill-smashing, Turbo.

All modes are limited to 20 mph in the U.S. and are selected via the simple yet effective Bosch screen that gives you info on your current speed, range, power mode, and battery life. You can, of course, pedal over that 20 mph limit on your own power, as well as turn off assistance if you want to give yourself a little extra workout.

I haven’t been a big fan of Bosch motors in the past, as I found them jerky and noisier than I’d expect. The unit in the Grail:ON has changed my mind. Its smooth delivery never caught me off guard, while at the same time impressing me with the sheer power available. My only gripe with the Bosch system is the display. It shows everything it needs to in regards to the motor, but I’m definitely looking forward to the day when I don’t have to also have my dedicated bike computer on board for GPS and tracking my workouts.

When it comes to range for the Grail:ON, Canyon estimates that a 210-pound rider will get just under 70 miles of range. E-bike range is difficult to quantify due to all the variables in play, but I was surprised to see that I blew their estimate out of the water, getting closer to 110 miles in Eco Mode. Granted, I’m 170 pounds, riding mostly on paved country roads with a mix of hilly and flat terrain. But having a battery that lasts as long as this one makes the eight-hour recharge time a little more bearable.

Also helping with the recharge downtime is how good the Grail:ON looks just sitting there. It screams, “I’m different!” much more than it does “I’m an e-bike!” and this is certainly appreciated. Whether it’s the super-clean internal cable routing or that Starship Enterprise front end, the Grail:ON is a looker and garners more than its fair share of second glances and inquiries. But it’s really the combination of standout parts and pieces that bring the whole package together.

I’ve talked about the tires plenty, but the DT Swiss wheels are also worth mentioning. With hubs that are bolstered to take the extra torque from the motor, the HGRC 1400 wheelset adds aerodynamics and strength to your ride. The fact that any aerodynamic gains are probably negated by those monster truck tires is irrelevant. They look awesome!

The seat post is another Canyon specialty that’s worth mentioning. Its leaf spring design helps smooth the ride out even more than the frame already does. Add in the Fizik Argo Tempo saddle, and you have a veritable two-wheel throne using some of the smartest design technology available to the cycling community today.

Speaking of technology, I used the top of the range Sram eTap version of the Grail:ON. This means wireless shifting for the 12-speed 10-36 cassette being driven by a 44 tooth FSA chainring up front. While the eTap drivetrain worked flawlessly, there is one odd thing about it — it uses batteries. The wireless derailleur uses its own battery, so it isn’t connected to the bike as a whole.

This means that theoretically, I could run out of batteries on the derailleur and not be able to shift, while still having a full charge on the motor. The Sram batteries last two to three weeks, so as long as you’re charging them along with bike lights and head units, you should be fine. But I wonder if this system would have been better served with a Shimano Di2 setup that still has a hardwire connection and could have been integrated with the bike battery.

The Grail:ON is a top of the line gravel bike that happens to have an e-bike motor. Giving riders multiple power modes while using class-leading components married to a frame that has been expertly tweaked to meet the highest demands, the Grail:ON is everything I’d expect from a world-class builder like Canyon. And with the Grail:ON winning a 2020 Red Dot award for bicycle design, I’m clearly not the only one who thinks so.

The closest competitor is the Specialized Turbo Creo SL Comp Carbon at $6,750. But with the Specialized, you miss out on the electronic shifting, upgraded wheels and tires, and buy a much less dramatic aesthetic. If those things don’t tickle your fancy, maybe consider the Giant Revolt for $4,200 as a more affordable option.

The durability of the Grail:ON definitely depends on your use. While carbon fiber isn’t known for being the most durable material in the world, the built-up thickness that the Grail:ON employs should keep issues at bay. Meanwhile, Bosch is known for making tough as nails electric motors with batteries officially rated to handle 500 recharge cycles giving you years of use before you’ll have to replace it. Firmware updates will be offered yearly from Bosch dealers to keep riders up to date with the latest gravel software improvements.

Yes. If the $6,999 price tag on the eTap model is a bit too much, you should definitely look at the standard Grail:ON CF8 model. The CF8 has mechanical shifting and slightly cheaper DT Swiss wheels, but otherwise has the same benefits of big tires and frame design for $5,799.