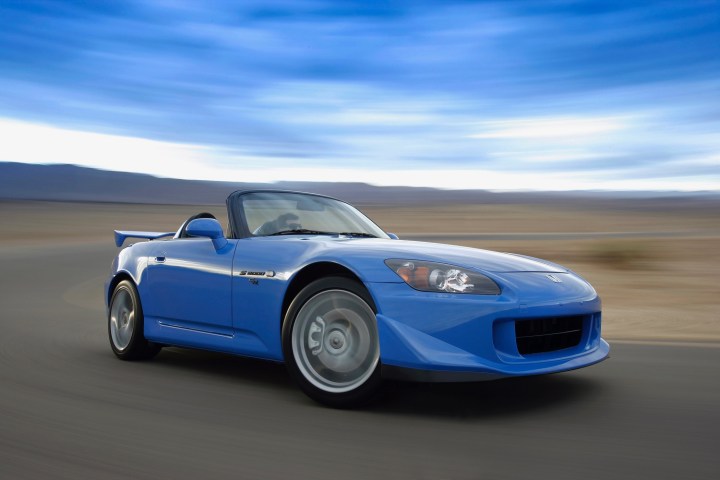 It’s always great when a hallowed nameplate returns from the automotive afterlife. A recent report indicates the Dodge Viper may soon return from the dead, and that got us thinking about other cars we’d like to see get resurrected. The Toyota Supra and Land Rover Defender are among them, and Toyota and Land Rover have indicated that both vehicles will return. So here are 10 cars not slated to come back yet that we hope to see resurrected in the future. Automakers, make it happen.

Honda’s luxury brand already answered many car enthusiasts’ prayers by reviving the NSX supercar, an icon of the brand’s 1990s heyday. But at the other end of the spectrum from the exotic first-generation NSX sat a much more humble, yet no less appealing machine.

The Integra was Acura’s entry-level model, occupying a place in the lineup currently filled by the ILX. Like most Honda/Acura cars of its period, the Integra was blessed with excellent handling. The Type R turned up the heat with a 195-horsepower 1.8-liter four-cylinder engine that revved to 8,400 rpm.

Once considered just another cheap Japanese used car, the Type R is becoming a proper collector’s item. One example was recently listed at close to $45,000. Given the original’s popularity, and the fact that parent Honda is now importing the Civic Type R to the U.S., it seems like the perfect time for Acura to revive the Integra Type R.

It’s hard to believe that the brand that inflicted the 1984 Century upon the world also built muscle cars, let alone one as sinister looking as the GNX. Darth Vader’s Buick marked a pivotal moment in the history of American performance cars.

By the 1980s, emissions and fuel economy concerns had more or less killed off the traditional American muscle car. But Buick was able to resuscitate it by using a turbocharged 3.8-liter V6 with electronic fuel injection in its Grand National in place of the thirsty carbureted V8s of old. The GNX was a one-year-only limited edition for 1987 — the last year of production. Just 547 of these 276-hp cars were made.

Buick is trying to break away from its traditional reputation for catering to the geriatric set, and has even dipped its toe into the performance pond with the Regal GS. But a powerful rear-wheel drive car like the GNX would really shake things up for General Motors’ near-luxury brand, not to mention provide a platform that could be shared with a couple of our other resurrection candidates (read on).

The El Camino isn’t the first car-based pickup truck (rival Ford beat Chevy to the punch, originally developing the concept for Australia), but it’s the one everyone remembers. There’s something inexplicably cool about marrying the styling features of a car and a pickup, and that something has inspired numerous real-life builds and Photoshop projects. So why shouldn’t Chevy bring back the real thing?

Chevy launched the El Camino in 1959, and the car-truck hybrid kept appearing in different guises until the 1980s, always based on an existing Chevy car platform. The El Camino and similar vehicles, like the rival Ford Ranchero, were always niche products in the U.S., but were immensely popular in Australia, where they are known as “utes.”

GM’s decision to end Australian car production likely destroyed any chance of a new El Camino, but we can dream, can’t we?

Chevy may still make the Corvette and Camaro, but the SS sedan will be missed because it combined American muscle car performance with four-door practicality. Carrying the name (short for Super Sport) that denoted the sportiest Chevy models during the golden age of muscle cars, the SS should have been a sensation.

The muscle sedan was basically a rebadged Holden Commodore from GM’s Australian division. It packed 415 hp courtesy of a 6.2-liter V8 engine and rear-wheel drive. You could even get it with a six-speed manual transmission. But sales were sluggish, and when GM discontinued Australian car production, the fate of the SS was sealed.

While the Dodge Charger also offers a big V8 and four doors at a relatively affordable price, it’s not available with a manual transmission. Chevy also put more effort into the SS’ handling, making the Bowtie sedan a more complete package. That’s why we’d love to see it return.

The S2000 was one of the best small sports cars ever. It looked great, it was fun and simple, and its four-cylinder engine (originally 2.0 liters, later increased to 2.2 liters) loved to rev. It’s a reminder that Honda can make great performance cars that aren’t based on the Civic.

Honda launched the S2000 for the 2000 model year, just as Japan’s decade of dominating the auto industry was winding down. The S2000 was an example of Honda at its best. It was a car that delivered driving pleasure without too much technological interference, and was just as reliable and easy to use as a Civic or an Accord.

Rumors of an S2000 resurrection circulate regularly, testifying to the sports car’s popularity. Many reports indicated that Honda planned to replace the S2000 with a mid-engined mini supercar, but that car turned out to be a concept designed for Gran Turismo Sport. It’s unclear if Honda has any actual plans for a new S2000 at this time.

British automaker Lotus seems to have few product plans other than endless permutations of its Evora, Elise, and Exige sports cars, but that won’t keep the company around forever. It’s inevitably planning an SUV, but a revival of one of Lotus’ most iconic models could get it out of its rut.

The Lotus Esprit first appeared in 1976 and quickly gained fame as the car that transformed into a submarine in the James Bond movie The Spy Who Loved Me. In 1982, Lotus introduced a more powerful turbocharged version that took the Esprit into supercar territory. Lotus further upgraded the Esprit with a V8 engine before pulling the plug in 2004.

Lotus discussed building a new Esprit as part of what turned out to be an overly ambitious plan to launch a raft of new models around 2010. Whenever future Lotus plans are discussed today, the Esprit is almost always mentioned. We think it would be a great rival for the likes of the McLaren 720S, Ferrari 488 GTB, and Lamborghini Huracán.

Even before Vin Diesel drove one in the first Fast & Furious movie, the RX-7 was an automotive icon. Its unusual rotary engine set it apart from other sports cars, and was likely a big factor in its demise.

A rotary engine (sometimes referred to as a Wankel, after inventor Felix Wankel) uses a rotating assembly instead of conventional cylinders. This allows the engine to be smaller and lighter than piston engines, and to rev very high. However, rotary engines typically return poor fuel economy and are known to consume a lot of oil. That’s partly why Mazda hasn’t built a rotary-powered car since discontinuing the RX-7’s successor, the less-popular RX-8, in 2013.

Since that time, the stream of reports that Mazda is bringing back the rotary engine has not stopped. Concept cars like the stunning RX-Vision show there is still love for the rotary within Mazda. But the engine’s inherent limitations may doom any efforts to return the RX-7 to showrooms. As it stands, Mazda has only confirmed it will build a new rotary engine to use as a range extender in an electric car.

The Subaru WRX STI and Mitsubishi Lancer Evolution formed one of the great modern performance car rivalries. But while the Subaru is still around, the Mitsubishi is no more.

Both cars were birthed by rally racing. In the 1990s, FIA World Rally Championship regulations required manufacturers to build production versions of their race cars in order to qualify them for competition. The Evolution (or “Evo” for short) was a humble Lancer sedan fortified with a powerful turbocharged engine and all-wheel drive. By the time it landed in the U.S. in 2003, it was in its eighth generation.

Mitsubishi’s fortunes eventually faded, and the automaker chose to stop developing the Lancer in order to concentrate on the SUVs deemed more important to its bottom line. The Evo bowed out in 2015 with a special Final Edition model. Executives have hinted at a possible return, but the Evo may morph into an SUV, possibly with an electrified powertrain. We think Mitsubishi should make something happen, and stop letting Subaru have all of the fun.

SUVs are overtaking sedans in popularity, and the Montero helped start that trend. It was one of the first SUVs that worked well as an everyday family vehicle. But unlike most of today’s SUVs, it also had genuine off-road capability.

The Montero looked like it would fit in well on a military base, and could actually back those looks up with an old-school four-wheel drive system that allowed it to travel well beyond the school parking lot. Mitsubishi even raced modified versions in the perilous Dakar Rally. But as car-based crossovers emerged with superior refinement and fuel economy, traditional SUVs like the Montero fell out of favor.

Recent concepts like the GT-PHEV and GC-PHEV indicate Mitsubishi is toying with bringing back the Montero. Reviving the familiar nameplate could help the Japanese automaker pull out of its recent slump. At the same time, the Montero would help break up the current monotony of car-based crossovers.

With the GT-R and 370Z, Nissan currently has two solid sports cars in its lineup. But why stop there? The 240SX was Nissan’s affordable sports car throughout the 1980s and 1990s, and it would be great to see it resume that role today.

Thanks to its low price and rear-wheel drive platform, the 240SX is probably best known today as a popular canvas for tuners. Specifically, it’s a darling of the drift scene, in much the same way as the 1932 Ford V8 was the foundation of early hot-rodding. While the 370Z and GT-R also get their share of tuner love, these cars are more expensive, limiting their appeal.

The success of the Subaru BRZ and Toyota 86 twins show that demand exists for small rear-wheel-drive coupes. Nissan toyed with the idea of building a competitor in the form of the retro IDx, but ultimately scrapped that plan. We think a revived 240SX would make a great affordable performance car.