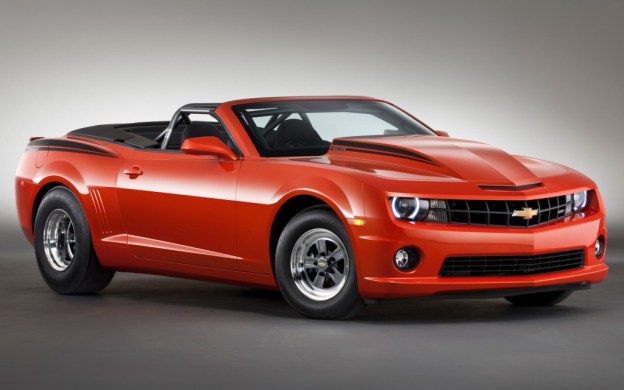 Chevrolet’s COPO Camaro was built to do one thing: go fast in a straight line. That singularity of purpose makes it pretty special. So does the fact that only 69 copies will be made. Chevy couldn’t leave well enough alone though, so it decided to make the last two COPOs into convertibles. Can you feel the wind in your hair while wearing a helmet?

Like the hardtops, the COPO convertibles are all about reliving Chevy’s past muscle car glory. The name stands for Central Office Production Order, the system of back door channels drag racers used to put big engines in little Camaros in the ‘60s.

The 2012 COPO Camaro is a drag racing special, designed to compete in the National Hot Rod Association’s Stock Eliminator and Super Stock classes. The cars have VIN tags, but extensive modifications mean they probably won’t be street legal in any of the United States.

Like the coupe, the COPO convertible ditches the stock Camaro’s independent rear suspension for a solid axle, and rolls on fat drag slicks. The interior is gutted to save weight and make room for a roll cage, racing bucket seat, and Chevrolet Performance gauges.

The convertibles were part of the 20-car block ordered with a 5.3 and a larger, 4.0-liter supercharger. That combination is good for 550 hp. The coupes got Powerglide automatic transmissions, but the convertibles will be equipped with Turbo 400 three-speed automatics.

Only 69 2012 COPO Camaros will be built, and the convertibles will be numbers 68 and 69. As if a one-of-two body style with the most potent engine wasn’t enough to whet collectors’ appetites, only one of the convertibles, number 69, will be for sale.

Chevy is keeping one car, while the very last 2012 COPO will be auctioned off for charity. It will cross the block at the 2013 Barrett-Jackson auction in Scottsdale, Arizona in Januaru 2013, with all proceeds going to the American Heart Association. It will presumably sell for much more than the regular COPO’s $89,000 sticker price.

Hopefully the good cause will distract buyers from the silliness of this convertible dragster. Coupes are stiffer and more aerodynamic, and, in racing, every little advantage counts. The COPO convertible’s rarity will probably be its biggest attraction.

Luckily for fans of burnt rubber, the auction won’t be the last time Chevy offers a COPO Camaro. Another batch of 69 cars will be built in 2013. The entire car, from the engine to the unpainted body-in-white, will also be available a la carte, so buyers can build their own COPO Camaro.