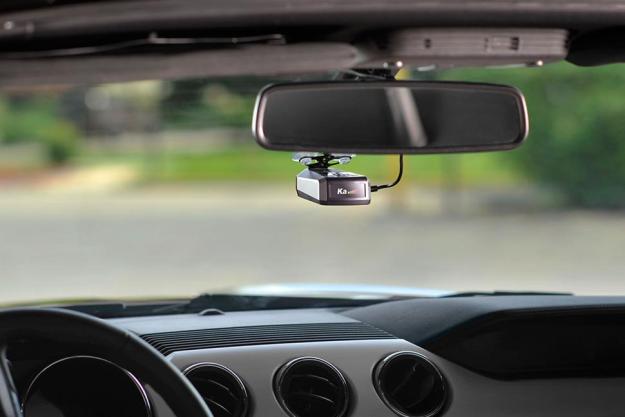 “Cobra’s a bit late to the party by offering its first digital radar detector in 2015, but its impressive range and accuracy make it worth the wait.”

If you’re looking for a product that alerts you of police presence — not grocery stores or other radar detectors — we recommend you chose one that includes these three letters: DSP.

DSP stands for digital signal processing, which is arguably the most useful addition to the radar detector industry ever. DSP products use powerful microchips to quickly and accurately analyze incoming signals, comparing them to known police frequencies to cut back on false alerts. This technology has been around for some time now, but believe it or not, the DSP 9200 BT is Cobra’s first foray into digital detection.

The result is the most expensive detector in the company’s catalog — it costs $40-0 — but it’s also the brand’s most useable and least intrusive offering by far.

Cutting through the noise

After plugging in the compact unit and Bluetooth pairing it to my smartphone (more on that later), I immediately drove to the most hallowed proving ground for radar detectors — the strip mall. Storefronts with automatic doors generally use K or X-band radar frequencies to identify incoming customers, and they often illicit an annoying cascade of beeps and jingles from non-DSP commodities. With Cobra’s flagship model, I was pleasantly surprised to hear nothing but a single muted chime, and it only came on after I was within smelling distance of the entrance.

I was able to replicate these results as I drove across town, passing row after row of markets and boutiques without more than a chirp or two. Simply put, the upgrade to digital has improved the device’s functionality tenfold, and compared to the Cobra SPX 7800BT I tested in February, the difference is night and day. It’s even sophisticated enough to filter out pulses from other vehicle’s collision avoidance systems, which use radar to anticipate crashes and brake accordingly.

The reduction in false signals is all well and good, but it amounts to nothing if the device cuts out the important stuff, i.e. the fuzz. Thankfully the 9200 BT’s processor has improved range and sensitivity as well, so I was able to pick up the 5-0 from several blocks away on K, Ka, and X-band frequencies. When I drove by the police station, it lit up like a Christmas tree. It also boasts a nifty display graph on the screen, which tells you exactly how strong the signal is, from which you can infer approximate proximity.

Despite its advances in digital wizardy, the occasional stray signal does get through; it’s just the nature of the beast. However, the range-topping Cobra has a variety of modes to help eliminate out false alarms, starting with the basic Highway (most sensitive), City (ignores weak X-band signals), and City Max (maximum filtration) settings.

The DSP 9200 BT is an intuitive, sophisticated, and practical device.

Another cool feature is called SpeedMute, which allows the driver to silence unwanted notifications while driving below a certain speed. I also found the AutoCity function particularly helpful, as it automatically switches between City and Highway modes based on velocity. Finally, the Quiet Drive and Auto Mute settings can further customize the user experience, muting all alerts and reducing volume after four seconds, respectively, when turned on.

Related link: Cruise past speed traps with the ultimate Escort

It’s not all sunshine and rainbows though, because the 9200 BT’s screen — both in resolution and size — could definitely use improvements.

You’ve probably heard the idiom, “An ounce of prevention is worth a pound of cure,” which brings us to the Bluetooth-connected iRadar app. Available for iOS and Android devices, iRadar allows drivers to pin notifications for high-threat areas, red-light cameras, and speed traps on a local map, which the 9200 BT picks up whether the app is in play or not. When it does, the unit conveniently notifies the driver with a spoken message, and counts down the distance to it in yards on the screen. Users can report threats to the iRadar community directly from the app, or by simply holding down the menu button on top of the detector for a couple of seconds.

The application helps mitigate laser-based threats as well. Once one of those pesky beams is detected, an alert is automatically (and anonymously) relayed to Cobra’s servers, then routed to other drivers approaching the vicinity. There are even music and navigation controls embedded inside iRadar, meaning you don’t need to exit the app to switch up your tunes. As for the navigation app, it’s very simple, so you’re better off sticking with your phone’s dedicated equivalent.

This kit includes a folding shovel, flashlight, first aid supplies, and more to keep you safe during a breakdown.

Anker’s jump starter can give your car and your mobile devices the boost they need to get going again.

The best radar detectors are the ones you don’t really notice until you need to notice them. They work silently in the background, free of the sustained warnings that plague devices further down the price spectrum. Four-hundred dollars may seem like a lot for a Cobra product, but it does what it’s designed to do extremely well, and just think of the money you’ll save by avoiding tickets.

A few errant alerts slip through the cracks, sure, but in a world saturated by invisible radio waves, it’s a forgivable offense. Outside of that, the DSP 9200 BT is an intuitive, sophisticated, and practical device, one that’s enhanced by a well-thought-out supporting cast of smartphone apps and a cooperative community. If it’s a reliable dashboard watchdog you’re after, definitely go digital.