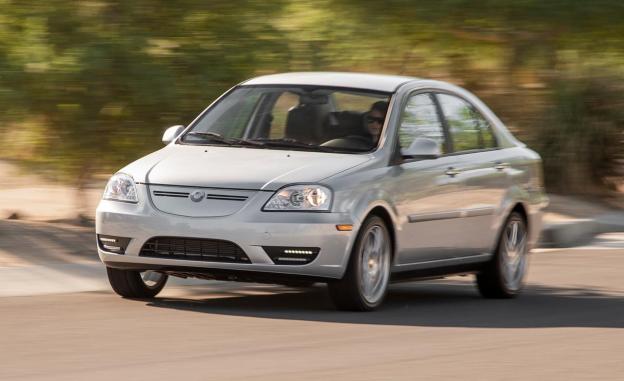 Tesla Motors has stolen the electric car spotlight with its flashy, luxurious Model S, but there is another upstart EV builder that most people forget about (and it’s not Fisker). Maybe that’s why Coda Automotive is filing for bankruptcy.

The company will leave the car business and instead concentrate on Coda Energy, a stationary battery division it started in 2011.

Coda Automotive had a short and frustrated existence. It finally put its electric sedan on sale last year after months of delays, only to lay off 15 percent of its workforce last December.

While the car business has always been tough to break into, it’s easy to see why Coda failed just by looking at its product.

Coda really was the anti-Tesla; its car was supposed to be cheap and unpretentious, which is why it didn’t even have a name.

However, that meant Coda had to skimp on several qualities that could have attracted less humble customers. The Coda was based on the Chinese Haifei Saibao, so it had the styling of a 1990s Hyundai. It also lacked the tech and convenience options of other cars.

In the end, the Coda sedan wasn’t especially cheap either. At $37,250, it was actually a little dearer than a Nissan Leaf, and thanks to the creation of a new $28,800 base model, the Leaf is now significantly cheaper.

The Coda’s performance didn’t set the world on fire either. It’s 85 mph top speed and EPA-rated 88-mile range put it in the middle of the EV pack.

Even if the car was better, Coda’s demise wouldn’t be entirely surprising. Starting a car company isn’t easy, even when that company isn’t built around relatively unproven technology. Just ask Preston Tucker, or Henrik Fisker.

Like those men, Coda’s founders had a good idea that just didn’t work out. Coda may be gone, but hopefully the idea of a truly affordable, no-nonsense EV won’t die with it.