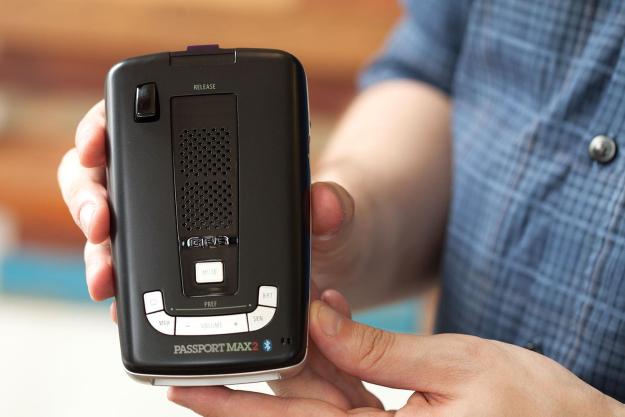 No one likes getting a speeding ticket, which is why there are crowdsourced apps like Waze that warn you of police locations. But when you’re barreling down a lonely highway, only a dedicated radar detector will help you.

Escort’s Passport Max2 radar detector is an excellent early warning system when there’s no one else around—and it can be supplemented with additional crowdsourced warnings from an app.

The Passport Max2 is Escort’s top-of-line model, and it comes with a top-of-the-line price: $600. The radar detector covers the major frequencies used by law enforcement: X-band, K-band, Ka-band, and laser. The last two are most frequently used by speed traps. The package includes the detector, a 12-volt power cord, a travel case, and a suction-cup windshield mount. One of the major benefits of the Passport Max2 is that it has a built-in GPS chip so that it can correlate a database of red-light and fixed speed cameras with your location, warning you in plenty of time that there’s photo enforcement ahead. No smartphone required.

If you want more, the detector does have built-in Bluetooth to pair with a smartphone so you can use the Escort Live app, available for iOS and Android. The app shows a live map of your peregrinations, your current speed in a big icon, and it will sound warnings reported by other drivers of police in your area. The app is free, but if you want to receive weekly updates to the Defender database of active red light and speed camera locations, a subscription is $19.95 for one year or $39.95 for three years (updates are downloaded by connecting the detector to a PC).

Over hundreds of miles of city and highway driving, the Passport Max2 did indeed silence false alerts.

One promise of the Passport Max2 is that it won’t besiege you with false chirps and alarms. Traditionally, drivers would simply learn where a neighbor’s garage or a car dealership’s security would set off a radar detector and just ignore it. But the Passport seeks to quiet those false alerts entirely by knowing your location and leveraging the processing power of an internal DSP (digital signal processor) to suss out the errant frequencies. DSPs are used in many audio applications and are programmable, making them particularly well-suited to the task at hand.

On the Road Performance

Over hundreds of miles of city and highway driving, I found the Passport Max2 did indeed silence false alerts. On an isolated country road where other detectors often falsely report K- band hits, the Passport Max did not interrupt my quiet drive. Furthermore, on urban streets usually peppered with false alarms, the Passport was relatively silent.

If you’re stuck in traffic next to a speed trap, a mute button on the power cord (in addition to the one on top of the detector itself) is a great convenience. Hit it once to mute the current warning or tap it three times to store the location as a false alert. I found it a little confusing that pushing the button twice would cancel a stored false alert location. Personally, I’d prefer to have a few errant alerts rather than miss a real trap, but my passengers appreciated the more peaceful ride.

For monitoring, the Passport’s simple but bright display is easily legible with a quick glance, showing bars for radar strength, an icon with the local speed, and—should you exceed a selectable limit (such as 70 mph)–your speed in red. You can also set the detector to tell you verbally to slow down should you exceed a limit of your choosing.

Radar traps and cruising squad cars checking speeds were common on my test drives. In detecting K- and Ka-bands, I found the Passport Max2 was dutifully sensitive, consistently warning me before visual contact was made with the speed traps—and, more important, generally before I came within the officer’s purview (such before rounding a curve or reaching the top of a hill). I found I received plenty of warning about fixed radar signals (enough to let the driver in front of me take the rap), as well as manned police speed traps.

I received plenty of warning about fixed radar signals — enough to let the driver in front of me take the rap.

When reporting laser hits, the Passport Max2 emits a loud, electronic phasers-on-stun-like burst that certainly gets your attention. It has to. Law enforcement can keep a laser gun turned off until the last minute, aim it at vehicle quickly, and get a reading before most drivers can react.

I did find Escort’s red-light camera database relatively accurate and more complete than programs that rely solely on live, crowdsourced information. Other Escort owners can mark spots and I heard the “Live police!” warning several times using the Escort Live app on a smartphone. In each case, it proved to be correct. More important, though, is that the permanent database includes locations of cameras that are intentionally hidden by municipalities such as New York City.

Adding the smartphone app support nicely augments the features of the radar detector, but the warnings suffer from one fault common to all systems. Because GPS systems don’t know your precise elevation, you may receive camera warnings for roads below you when traveling on an elevated roadway. It’s not a common issue, but it points to the limits of current technology.

After traveling with the Escort Passport Max2 on many long road trips, one feels naked going without it. There’s no question it saved me from if not a ticket at least an uncomfortable stop or two. And I like red-light camera warnings primarily because they indicate that there’s a particularly dangerous intersection ahead.

The only question is whether, with other free apps available, it’s worth $19.95 a year to get updates. Then again, if you can afford this top-notch detector, you can probably afford the subscription fee.