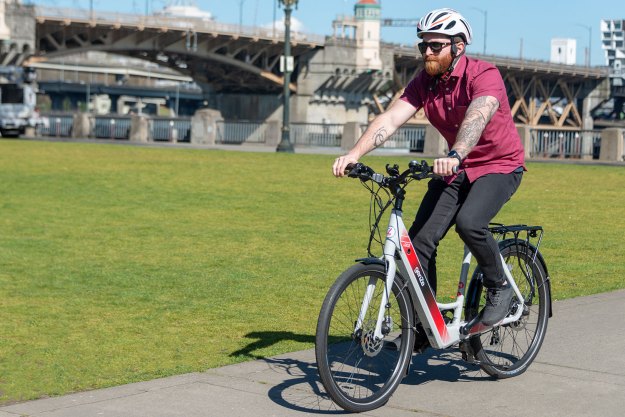 Ebikes have boomed over the last few years. As the industry continues to grow, and the sea of available models proliferates, more companies have begun popping up offering their own unique alternatives.

One such company is the Portland, Oregon-based brand GenZe. While also a purveyor of electric scooters, GenZe’s biggest — and perhaps most user-friendly — draw is its ebikes. Selling what it refers to as 100- and 200-series options, each roughly resemble the aesthetic of a souped-up beach cruiser. To see how GenZe stacks up against its growing competition, we snagged one of the 200-series ebikes and took it for a few spins around the Rose City.

With GenZe residing in the same city as our Digital Trends headquarters, we didn’t need to have the bike shipped to us. Because of this, setup consisted of meeting with a GenZe technician to pick up the bike before plugging it in to charge. However, purchasing one online — as opposed to picking one up in a retail store — would likely require a few typical bike tools to piece it together upon arrival. Instructions on how to do this are included with the bike.

While we waited for our 200-series to charge, we couldn’t help but notice it doesn’t scream “ebike” like so many others on the market do. For our review, GenZe supplied a white framed model with red accents and, as mentioned above, it looks much like a typical beach cruiser.

Don’t think of these as just a one-size-fits-all bike, either. GenZe offers its ebikes in a variety of sizes to more closely fit people of any height. Additionally, the handlebars are easy to adjust, meaning our colleagues could take it for a quick ride without it feeling too big or small for them. The four-way adjustable seat also helped various riders find the perfect fit.

We couldn’t help but notice that it doesn’t scream “ebike” like so many others on the market do.

The ergonomic handlebars — which also house the bike’s throttle — were comfortable to grip, though they did feel awkward at first because they’re just a touch bigger than what we’re used to. To allow for an eased mind when locking up the bike, GenZe allows for easy removal of the 200’s battery pack — this was also handy when we wanted to charge the battery, but didn’t want to bring the entire bike inside.

One design element we didn’t like was the integrated LCD display, which GenZe situated on the main frame, just under the handlebar stem. Though it doesn’t take much to quickly glance down at the screen, it does take your eyes off the road, even if just for a second. With information such as speed, battery life, miles traveled, and the current pedal-assist level, who wouldn’t be compelled to look? We certainly were — a lot.

As touched on above, the 200’s LCD interface provides a basic user experience — and that’s a good thing. Ebikes don’t necessarily need a flashy display or extensive interface since most of its use takes place while people are riding the bike, and not capable of doing much tinkering.

Location of the screen aside, the 200’s display offered everything we needed to not only know how fast we were going but also which operating mode and pedal-assist level we were at and how much juice the battery had left. This allowed us to quickly know whether we were chugging along in analog mode without any help, or able to cruise with the help of throttle or pedal-assist mode — while also giving us quick-hit information on whether we needed to charge the battery.

GenZe’s 200-series ebike comes standard with three different operating modes: Analog, Throttle, and Pedal Assist. Considering Analog is just the bike with no electric support, the 200’s other two features are the real stars of the show — and the reason you want to buy an ebike in the first place.

With Throttle Mode activated, riders can crank up the throttle — located on the right handlebar — and accelerate to speeds up to 20 miles per hour. Perfect for when even the heaviest of pedal-assistance won’t get the job done (or you’re feeling fatigue), Throttle Mode is like having control of a lightweight moped. It does, however, rapidly sap the bike’s battery life (more on that below).

The one design aspect we weren’t entirely on board with was the location of the integrated LCD display.

While Throttle Mode is fun, the 200’s Pedal Assist mode gets you moving fast while still providing a bit of a workout. Offering five different levels of pedal assistance, GenZe lets the rider choose how much (or how little) help they want. Without going full Analog Mode, riding on the first level gives a minimal amount of pedal boost, which we found to be perfect for our weekend rides where we wanted to break a bit of a sweat.

Each additional level (two on up to five) provides a bit more help. While the increases seemed somewhat negligible as we hit the “Plus” button one by one, the difference between level one and level five is stark — specifically concerning the noticeable jerk of the bike once the motor kicks in.

With the control panel located on the left handlebar, we were able to switch between any of the levels with relative ease, allowing us to quickly add or remove pedal-assistance as we saw fit. If we didn’t feel like overheating on our way to the office, we cruised on level four. When we wanted to feel like we were putting in a little legwork, we dropped down to level two or three. We appreciate its versatility. It made riding the bike a much more enjoyable experience because we felt as though we could fine-tune our preferred ride style entirely on the fly.

Perhaps one of the biggest selling points of any ebike concerns its range — or, how far you’re able to get on a full battery before it shuts off and you’re left pedaling away with only your own effort. On paper, GenZe estimates the 200-series features a 15- to 18-mile range when using the throttle, and a 30- to 50-mile range when using pedal assist. In practice, we found these estimations to be right.

Strictly using the throttle — i.e. never pedaling — is an easy way to get around, but it certainly drains the battery. That was good for when we needed to test the bike’s charge time (more on that below), but we wouldn’t recommend relying on it to get you to and from work each day — unless you don’t mind charging your commuter every night.

However, using it to climb steeper hills, or for those rides home where you’re feeling a bit spent, it’s wonderful. Plus, pulling back on a throttle makes you feel as if you’re riding a motorcycle — and who wouldn’t like that kind of sensation? Despite its ability to burn battery life, we found its range to sit anywhere from 14 to 18 miles, depending on how aggressively we rode. Thankfully, we never completely killed the battery much further than a mile or two from home, so we weren’t ever left pedaling long distances when using the throttle to its max.

We appreciate its versatility. It made riding the bike a much more enjoyable experience because we felt as though we could fine-tune our preferred ride style entirely on the fly.

Nailing down a consistent pedal-assisted range was a bit trickier. Not only is its on-paper estimate a wide range, the fact we were able to use five different modes of pedal assistance (which, don’t get us wrong, is a good thing) meant we were constantly riding the bike with various amounts of power.

However, we found ourselves using power modes three and four most often, as our commute to and from work features a moderate helping of hill climbs and descents. During our time, we were able to routinely log anywhere from 38 to 45 miles on a single charge, allowing us to go multiple days before plugging it back in.

Though GenZe’s 200 series severely lacks in range compared to an ebike like Specialized’s Turbo Vado, which gets up to 80 miles in range on a single charge, it’s worth pointing out that the 200 is roughly $3,000 cheaper. Even Evelo’s Delta gets roughly 40 miles on a single charge but is a whopping $2,000 more expensive.

Perhaps the closest range comparison would be the Espin Sport — a similarly-priced, $1,800 ebike which boasts a maximum range of around 50 miles. One of our writers loved reviewing it so much, he purchased one to be his daily commuter. And by daily, we mean it — he rides the thing every single day, rain or shine, sun or snow.

Manufacturing a capable ebike without crossing the $2,000 threshold is a serious feat — and one GenZe’s 200-series managed to do with ease. We’ve ridden more full-featured ebikes in the past which have shown to have better range (Specialized’s Turbo Vado) or more proficient off-road capabilities (Evelo’s Delta), but the 200-series fits a niche all its own as a suitable commuter.

Sure, you’d be able to commute on the Vado or Delta, but with both of those pushing upwards of $4,000 and $3,000, respectively, GenZe’s wallet-friendly price tag is very attractive.

The GenZe 200 series is one of the most cost-effective and capable ebikes we’ve tested. Priced at under $2,000 and capable of riding up to 50 miles on a single charge, its closest competition comes in the form of the Espin Sport. With a similar price tag of around $1,800, Espin’s ebike also features a nearly identical range and needs roughly three to four hours to fully charge.

One plus for the Espin is the fact its heads-up display is located on top of the handlebars, which is a much more intuitive placement than GenZe’s sitting lower on its top crossbar. A nitpick, to be sure, but worth pointing out as even taking your eyes off the road for a split second can be dangerous.

Like any bike — of the electric variety or otherwise — GenZe’s 200 series isn’t going to last forever without standard maintenance. With that said, the bike does seem sturdily built, and we never felt as if any of its components were flimsy enough to break off over time. Of course, its 18-month warranty is more than enough time to account for shoddy construction, but our couple months with the bike proved it to be anything but cheap.

Yes. Few ebikes simultaneously offer an efficient pedal-assisted ride and a cost-effective price tag. GenZe’s 200 series ebike manages to do both — and well, at that. It’s the perfect daily commuter, assuming you’re able to plug the thing in at work. You’d be hard-pressed to find a similarly capable ebike for under $2,000, though the Espin Sport does give it a serious run for its money.