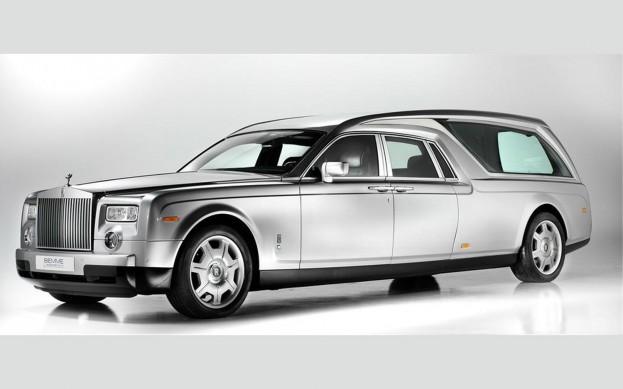 Everyone may be equal in death, but that does not mean that everyone takes their final journey in the same car. Hearses are not high most people’s list of must-have luxury items, but that didn’t stop Italian coachbuilder Biemme Special Cars from turning a Rolls-Royce into funerary transportation.

This hearse, based on the Rolls Phantom, is called the B12. To equip the Phantom for its new job, Biemme stretched the wheelbase aft of the rear door and raised the roof to accommodate a casket. The hearse is 23 feet long, three feet longer than a Phantom Extended Wheelbase. On this European model, the rear compartment gets large windows, although most American hearses do not put the passenger of honor on view.

From the front, the B12 appears to be stock, with Rolls’ trademark grille and “Spirit of Ecstasy” hood ornament. The B12 also retains the stock Phantom’s rear-hinged “suicide” rear doors. How many puns can you fit into one car?

Under the hood, the B12 retains the Phantom’s 6.75-liter (Rolls likes to say “six and three-quarter”) V12, which makes 453 horsepower and 532 pound-feet of torque, and its air suspension system. The suspension may be beefed up to cope with the hearse’s added weight, not to mention the weight of a casket.

Biemme specializes in building hearses, but they are usually based on the less-dramatic Mercedes E-Class. However, this isn’t the first time hearse builders have thought out of the box: Biemme built a hearse based on the Mercedes CLS “four-door coupe,” and Polish President Lech Kaczynski was ferried to his final resting place in a Maserati Quattroporte. That’s much more posh than the Cadillac DTS or Lincoln Town Car most Americans take their final rides in.

Any funeral directors looking to upgrade their fleets should start saving now. A regular Phantom costs $385,000, not exactly pocket change, but the B12 Phantom hearse costs about $662,000, depending on exchange rates. The world’s most expensive hearse will go on sale shortly after its debut at the Tan Expo funeral show in Bologna later this week.

A Rolls-Royce hearse might seem like an unnecessary extravagance, but for Rolls’ traditional clientele, it makes sense. If you spend most of your life in a Rolls-Royce Phantom sedan, why downgrade, even if you’re dead?