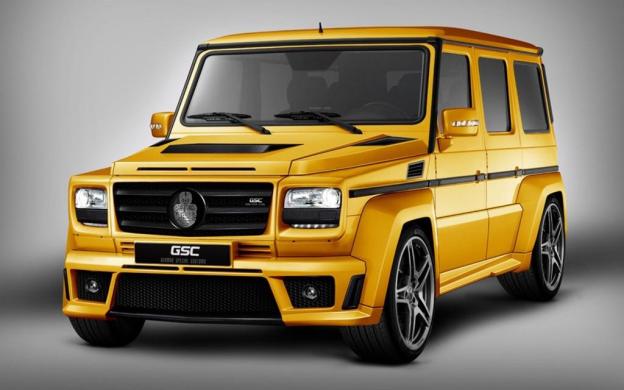 The Mercedes-Benz G-Class is an extremely capable vehicle. Designed in the 1970s for military use, the “G-Wagen” is a legendary off-roader with plenty of street cred. Hummer is kaput, but the boxy G-Class soldiers on. Still, no one ever accused this SUV of being pretty, which is why German Special Customs (GSC) stepped in to make some improvements.

GSC’s GoldStorm body kit definitely makes the G-Class look different; whether it makes it look better is another story. At the front, GSC replaced the G-Class’ round headlights with rectangular ones, and replaced the Mercedes three-pointed star with a grille badge of its own. The hood and front bumper get a smattering of vents, as if this 5,700 pound SUV was a race car that needed to cool its brakes and engine.

Wider fenders are usually a good idea for an off-roader, since they make room for bigger wheels and tires. On the GoldStorm, the fenders actually take up more room than the stock ones. They conceal part of the wheel well, which makes the car look lower.

The rear of this modified G-Class got a similarly bizarre treatment. GSC replaced the stock rectangular taillights with round ones, just for the sake of being different. Like the front bumper, the rear gets some superfluous vents. At least the quad exhausts give the GoldStorm G-Class a little attitude.

GSC may have overshadowed its handiwork with the Goldstorm’s golden paint. A stock gold-painted G-Class would probably get just as much attention as one equipped with the body kit. It would certainly make Goldfinger think about trading in his Rolls-Royce. The ostentatious paint is necessary, because this G-Class is all about show. GSC did not mention any modifications to the interior, or any mechanical modifications. The rear-exiting exhaust indicates that the GoldStorm is based on a G550, which has a 5.5-liter V8 with 382 horsepower and 391 pound-feet of torque. That’s a decent amount of power, but other tuners would probably want more.

Tuners can always be counted on to do something outrageous, but “outrageous” and “good” are not synonyms. Focusing on style over substance is fine, but the end product has to actually be stylish. The GoldStorm is outmuscled by Mercedes’ own AMG models, and it has not made the G-Class any prettier.

Mercedes-Benz wants to know what you expect from a ride in a self-driving car
Mercedes-Benz’s brawny G-Wagen will get an electric makeover
The 2020 Mercedes-Benz GLB is a junior G-Class with room for six of your friends
2021 Mercedes-AMG GLE53 coupe is an SUV that wishes it was a sports car
Elon Musk eyes 2024 for Tesla robotaxi sans steering wheel, pedals
Ford recalls over half a million vehicles over safety issues
2023 Kia Sportage Hybrid first drive review: Style and substance
The best iPhone car mounts for 2022
BMW shipping cars without advertised Apple and Google features
Tesla recalls 130,000 U.S. vehicles over touchscreen safety issue
Mercedes issues urgent do-not-drive recall for 292,000 SUVs
Bluetooth hack compromises Teslas, digital locks, and more
EV glossary: All of the electric vehicle jargon you need to know