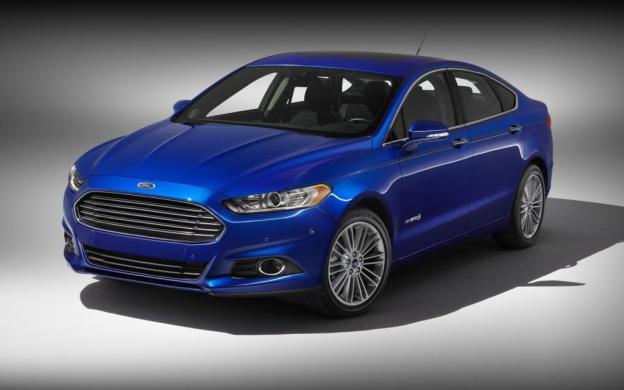 Ford’s redesigned 2013 Fusion has won praise for its Aston Martin-like styling, but now the four-door from the Blue Oval can add a more substantial accolade to its trophy case. The Fusion was named 2013 Green Car of the Year by Green Car Journal at the Los Angeles Auto Show on Thursday.

“It won by virtue of the fact that it offers an array of choices,” Green Car Journal editor Ron Cogan told the assembled crowd after announcing the Fusion’s win. With its selection of fuel efficient conventional, hybrid, and plug-in hybrid powertrains, the Fusion definitely spoils customers for choice.

Like other carmakers, Ford decided to drop the Fusion’s V6 as the headline motor in favor of smaller engines. In the six-cylinder’s place are two four-bangers from Ford’s EcoBoost line of turbocharged, direct-injected engines (along with a base, 2.5-liter Duratec engine).

The two EcoBoost engines are offered on the Fusion SE, which starts at $23,700. Stepping up to the $27,200 Fusion Hybrid nets 47 mpg in all three categories, a number that bests all other midsize sedan hybrids and comes within spitting distance of the vaunted Toyota Prius.

The Fusion Hybrid relies on a 2.0-liter four-cylinder Atkinson cycle engine and a lithium-ion battery pack, and so does the plug-in Fusion Energi. For $39,495, buyers get a larger battery pack and the ability to drive up to 20 miles on electricity alone, at speeds up to 62 mph.

Ford says the Fusion Energi will return 100 MPGe, although official numbers have not been released. The Chevrolet Volt is rated at 98 MPGe, the Toyota Prius Plug-In at 95 MPGe, and Ford’s own C-Max Energi is confirmed at 100 MPGe.

With its array of powertrains, he 2013 Fusion definitely gives buyers options, which something that has been missing from most green cars. Toyota is working to expand its Prius “family,” but customers only get one powertrain option per model, whether they’re buying a rental-grade base version or one with all the bells and whistles.

Carmakers have done the same thing with conventional fuel economy specials, bundling the most fuel efficient engine and transmission with a limited number of options.

The rest of the car world has always relied on options: whether its paint color or engine displacement, people always want to spec their car to suit their specific needs.

Green Car of the Year is chosen by a panel of environmental leaders, including Sierra Club Executive Director Micheal Brune and television host Jay Leno, along with the staff of Green Car Journal. Previous winners include the Volt, Honda Civic GX, and Volkswagen Jetta TDI.