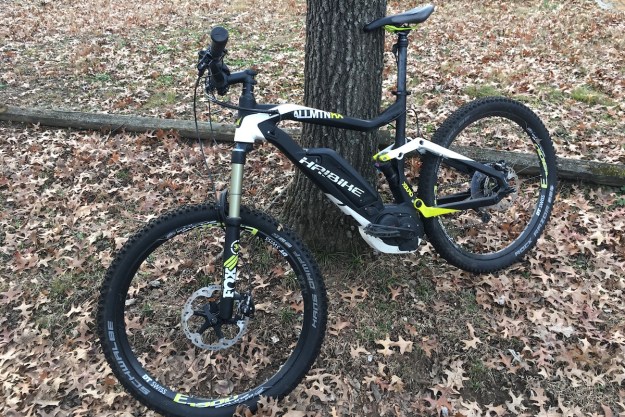 “Fun to ride and makes climbing hills a breeze, but feels like cheating for traditional mountain bikers.”

Over the past couple of years we’ve seen a spate of new electric bikes released, mostly designed with the commuter cyclist in mind. For the uninitiated, ebikes use a battery-powered motor to assist in pedaling, allowing riders to maintain a constant speed with less effort, even while climbing hills. This has made them a popular mode of transportation in urban environments, where traffic and quick navigation can often be a concern.

For the most part, ebikes haven’t sparked much interest from the hardcore cycling crowd, most of which prefer to do their own pedaling rather than receive assistant from a motor. But, Haibike – one of the pioneers in the ebike industry – is hoping to change that with its line of electric mountain bikes, including the Xduro AllMtn RX a bike that offers solid off-road performance with a little extra kick.

Originally founded back in 1995, Haibike introduced its first electric mountain bike in 2010, just as the ebike industry was starting to really gain traction. Since then, the company has worked to refine its products, upgrading components and refining their designs over time. Today, its latest offerings seamlessly blend traditional bike components with technology designed to make riding easier and more accessible then ever before.

When the drive is engaged, the Xduro is a lot of fun to ride.

At first glance, the Xduro AllMtn looks a lot like any other mountain bike you might see on the trail. Its aluminum frame resembles – at least in passing – the geometry that you would find on similar bikes from Trek or Specialized, albeit with a slightly modified design. But upon closer inspection you’ll discover that Haibike’s model is a bit thicker and beefier than the standard mountain bikes you’d find from traditional manufacturers. That’s because this frame is hiding a 350-watt Bosch Performance CX drive system inside, and it has a 500 Wh Bosch battery strapped to it as well.

That drive system – powered by the battery of course – is what really sets the Xduro apart from a standard mountain bike. When engaged, the motor offers assisted pedaling in four different modes, including Eco, Tour, Sport, and Turbo. A large digital display mounted to the bike’s handlebars indicates which mode the bike is in at any given time, while also displaying speed, distance traveled, and current battery life as well.

Eco mode is by far the most energy efficient of the four options, but as you would expect offers the least amount of pedal-assist too. If the bike is ridden in Eco mode only it has a range of about 60 miles before the battery is completely depleted. Each successive drive mode increases the level of pedal assistance at the expense of battery life of course. So, for example, if ridden exclusively in Turbo mode, riders will find that they make short work out of hills and can maintain a high level of speed at all times, but the range of the bike is reduced to a mere 12 miles or so.

It should be noted that the Xduro AttMtn can be ridden without the Bosch drive engaged at all, but we are not sure why you would want to. Weighing in at a shade over 50 pounds (22.9 kg), this is one heavy bike, and riding it without pedal-assist is incredibly taxing, even on flat pavement, let alone a trail. If there is one thing we learned while testing this bike it’s never, ever, under any circumstances, let the battery run out of juice while you’re still out on the trail. Trust us.

That said, when the drive is engaged, the Xduro is a lot of fun to ride. There is a substantial amount of forward thrust that kicks in as the bike accelerates up to speed, which only becomes more pronounced when you shift up to Sport or Turbo mode. You’ll also notice just how much assistance the Bosch system provides while climbing hills too, as trails that were previously all but inaccessible before suddenly become far more manageable. This is especially useful for the rider who struggles to climb long, steep hills or ride rough terrain in the backcountry, as the bike will definitely allow them to reach places that they haven’t been able to go before.

The other side of that coin is that the bike ultimately takes much of the challenge out of riding trails, which is part of what most mountain bikers enjoy about the sport. When routes that are traditionally difficult to ride start to become too easy, much of the allure of the ride is lost. There is a certain satisfaction to be had from climbing to the top of a ridge under your own power – legs and lungs begging for relief – only to reach the crest of the trail and go bombing down the other side at breakneck speed. Part of that equation is missing here, no matter how much fun the Xduro is to ride.

Additionally, because the bike weighs so much, it can also feel a bit ponderous at times too. A traditional mountain bike tips the scale at less than half the weight of the Xudro AllMtn, and as a result it feels noticeably more nimble and fast. Haibike’s design does a solid job of trying to replicate that feeling as best it can, but because it is so heavy it simply can’t compete when it comes to riding more technical trails.

In terms of its more standard cycling components, the Xduro is made up of parts from the usual suspects. It features a Fox suspension, Shimano shifters and chain, and a Magura hydraulic braking system. Each of those parts are serviceable enough for most riders, but they are hardly top of the line, particularly for a bike that costs as much as this one. That said, they do the job well enough and most of the parts can be easily upgraded at a later time if needed.

As far as mountain bikes go, the Xduro offers a fairly comfortable ride, even over rough trails. The bike uses 27.5 inch tires, which are all the rage in the industry at the moment because they are versatile enough to roll over most obstacles, while still maintaining a solid level of agility too. This helps the rider to feel more secure and comfortable in the saddle, particularly when first getting acquainted with how the bike handles.

The geometry of the Xduro is such that the rider must lean forward slightly in order to reach the handlebars. This is typical for mountain bikes in general, which often require riders to shift their position in order to adapt to changing trail conditions. But this bike offers a very smooth and stable ride – in part because of the extra weight – that makes it very forgiving of new or inexperienced riders. Additionally, the seat is fairly typical for a mountain bike as well, meaning it isn’t uncomfortable, but you’ll certainly want to wear padded shorts while out on the trail.

Haibike provides a five-year warranty on all of their bike frames, as well as two-year coverage on components.

The Xduro AllMtn RX $5,299 price tag isn’t particularly outrageous in a market where high-end bikes can actually cost twice that amount, even without a motor. But, for that same price you can also get a standard non-electric mountain bike with a lighter frame and better components that would perform much better on the trail. Of course, you’d also be giving up the e-drive system as well, which is the major draw of this bike in the first place.

In terms of electric mountain bikes on the market, you’d be hard pressed to find one that performs better than the Haibike Xduro AllMtn RX – other than the company’s upgraded 7.0 and 8.0 models coming sometime in 2017. In this field, Haibike has been a leader for a number of years, and it shows in the refinement of their products.

That said, if you’re just in the market for a new mountain bike, and don’t feel the need for an electric motor, there are numerous options from major manufacturers like Trek and Specialized that perform better on the trail for less money.

The ebike industry is evolving rapidly at the moment, with new drive systems, better batteries, and improved designs coming on a yearly basis. But the same can be said about the bike industry as a whole, where components are upgraded regularly. The Xduro AllMtn is no different from any other bike you would buy. Next year, there will almost certainly be an improved model, but this one will still continue to be a fun ride for years to come.

If you’re looking for an off-road ebike to make riding the trails easier, and provide access to places that would normally be too difficult to reach on your own, than indeed this is a bike that should be at the top of your list. But, if you’re a mountain biker who relishes the challenge of riding a tough trail, stick with a more traditional bike. The added weight on the Xduro AllMtn hinders performance to a degree, and the pedal assist often feels like you’re cheating when going up hill.

Topics
This crash-evading electric motorcycle gets its brains from BlackBerry
Lotus Evija electric hypercar is now one step closer to reality
Volkswagen to cease all non-electric motor sports programs
Lotus applies its automotive know-how to something with fewer wheels
The Uber hack is an outrageous tale of a teen hacking for fun
Tesla to fix window software on 1M of its U.S. cars
Lux and refreshingly livable, Mercedes’ EQE moves EVs mainstream
How to watch Tesla’s AI Day tonight and what to expect
2023 Audi Q4 E-Tron first drive: the predictable and traditional EV SUV we need
We need more 7-passenger EVs, but the 2023 Mercedes EQS SUV has room to improve
Tesla AI Day 2022: Optimus, self driving cars, and everything else announced
Tesla hopes full self-driving beta will be out globally by the end of 2022
Elon Musk reveals first delivery date and customer for Tesla Semi truck