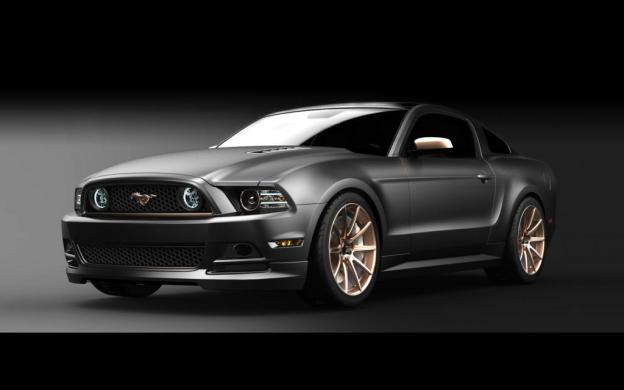 The Ford Mustang is a great platform for customization, so every year the Blue Oval swamps the Specialty Equipment Market Association (SEMA) show in Las Vegas with pimped out ‘Stangs. With so many customized cars already on the show floor, it can be tough to stand out from the crowd. That may be why Ford turned to an all-female team to design and build its latest SEMA Mustang, the High Gear.

What makes the High Gear different from other customized Mustangs? According to Seely, it was inspired jewelry, couture clothing, and high end architecture. That translates to satin black paint with rose gold accents and LED “angel eye” foglights. The result is much less flashy than most SEMA concept cars; a little restraint is always good. The final design was chosen over two other designs in an online poll. The satin black and gold combination makes the High Gear look a little like an old school hot rod, which may not help Ford and SEMA’s estrogen-infused PR campaign, but it will make this Mustang appealing to everyone.

On the inside, the High Gear will be upholstered in quilted suede and leather, in black with gold accents. Ford also said that the engine, undercarriage, and sound system will get some upgrades, but did not give any specifics. The High Gear retains the stock Mustang GT’s 5.0-liter V8 and six-speed manual transmission.

After its official debut at the 2012 SEMA show in the fall, the High Gear will be auctioned off, with all proceeds going to the SEMA Memorial Scholarship.

Building the High Gear will help SEMA, Ford, and the other companies involved showcase the talented women that work for them, and make the industry seem less male-centric. Hopefully the individuals who actually designed and built this customized Mustang will get their share of the glory because, like anyone else who builds a cool car, they deserve the credit.