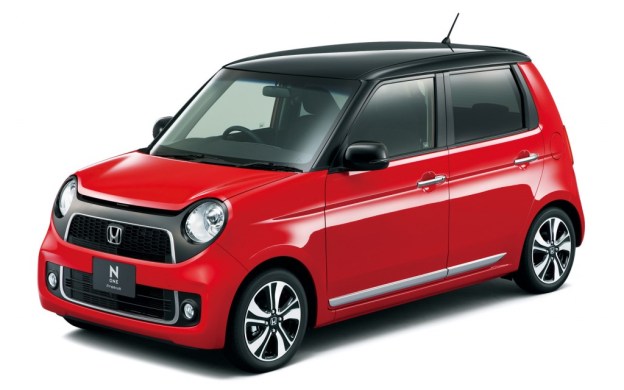 Honda is jumping on the retro mini-car bandwagon with a new hatchback. The new car with an old wrapper, called N-One, will be a spot of frivolity in Honda’s competent but staid lineup of cars and trucks.

The Mini Cooper, Fiat 500, and Volkswagen Beetle all borrow their retro chic styling from their makers’ classic models, and the N-One is no different. It’s based on the 1967 N360, Honda’s first mass-produced car.

The N360’s round headlights and virtually flat grille are faithfully rendered in a modern way. A black grille surround replaces the original chrome, and matches the optional blacked-out roof nicely. The slab sidedness of a 1960s car is also replicated well, although it does make the already-tiny wheels look like shopping cart casters. Optional xenon headlights add a modern touch.

The result is a car that looks like a suitable competitor for the 500, Mini, and Beetle, but the N-One is much smaller than any of those retro-mobiles. It’s a full three inches shorter than the Fiat, which is already the smallest of the bunch.

Like the Fiat 500, which is based on the more utilitarian Panda, the N-One takes the underpinnings from existing Hondas and gives them a more fashionable look. In this case, Honda started with its N Box and N Box+, two “kei” cars sold in Japan. Kei cars are a popular category of small vehicles that receive special insurance and tax rates under Japanese law.

The original N360 has the engine from a CB450 motorcycle, and its 21st century counterpart doesn’t do much better. The N-One borrows its 660cc engine from the other N-cars, with the option of turbocharging. The only available transmission is a CVT, but the N-One can be had with front- or all-wheel drive.

The N-One may be a small car, but it leaves an equally small hole in one’s wallet. A base N-One G with front-wheel drive and a naturally-aspirated engine will cost $14,375, and a loaded N-One Premium will go for $16,997.

For that price buyers get a decent amount of features, including an infotainment system, LED interior lighting, and the Magic Seat fold-flat seats from the larger Fit.

Still, the N-One’s kei car size means it’s too small for the United States, which is why Honda is limiting availability to Japan. It is interesting to see a Japanese take on the retro small car craze, but remember that the Mitsubishi i-MiEV, a kei car that actually made it to the U.S., is among the smallest cars sold Stateside, even after Mitsubishi made it bigger.