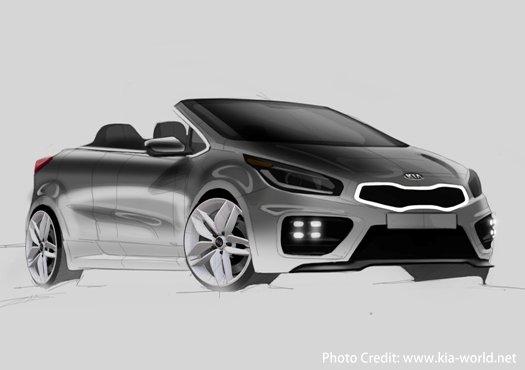 With summer unofficially here, it’s the perfect time to put the top down and enjoy a convertible. From the Mazda Miata to the BMW 3 Series, there are many fine choices, but what about a Kia?

This surprisingly alluring sketch of a Kia Pro_cee’d GT convertible appeared on fan site KiaWorld.net (yes, Kia has a fan site, for the Internet is vast) and while its provenance is unclear, it does pose an interesting question.

So while Kia is known for building economical mainstream cars, it’s also selling the Quoris luxury sedan, and has even hinted at a Subari BRZ/Scion FR-S-fighting sports car.

Those cars are a stretch for Kia, but this little convertible is a stretch in general.

The name may look like someone had a seizure while typing, but the Pro_cee’d GT is actually a performance version of the Cee’d hatchback, known the world over as Top Gear’s Reasonably Priced Car.

That means the car we see here is a front-wheel drive hatchback that’s been, err, converted into a convertible, and has some sporting pretensions. We know just one other car like that: the Volkswagen Golf R Cabriolet.

Not sold in the United States, the Golf R Cabriolet actually has more power than its tin-top sibling (261 hp versus 256), but it doesn’t have the latter’s 4Motion all-wheel drive grip or structural rigidity. That makes it a bit of an oddball.

The Pro_cee’d GT convertible would have the same problems as the Golf. Hot hatchbacks frankly lose much of their allure when the utility of a hardtop is taken away and replaced with less rigidity and less practicality.

Also, if Kia put the Pro_cee’d GT into production, it would be at even more of a disadvantage. The Golf is the king of front-wheel drive compacts, with decades of credibility to draw on. Kia has none of that.

Would you buy a sporty convertible with a Kia badge? Tell us in the comments.