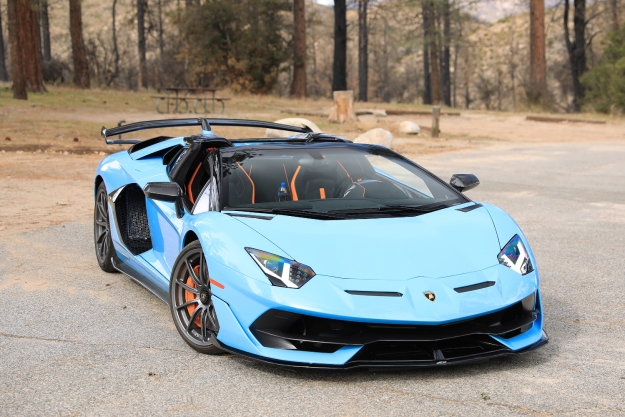 “Track-focused roadsters are often a contradiction, but the SVJ makes incongruities easy to ignore.”

When Lamborghini brought me out to Libson, Portugal to put the new Aventador SVJ coupe through its paces on a former F1 circuit, I went into great detail about the engineering required to turn the Aventador into a world-beating super sportscar. The SVJ coupe had recently claimed the coveted spot as the fastest production car around the famed Nurburgring, and the folks at Lamborghini were proud of their accomplishment.

Of course, the standard 730 horsepower Aventador S isn’t a slouch on track. However, a lot has changed in the realm of supercars since the Aventador’s 2011 debut. With competent entries from the likes of McLaren and Porsche, Lamborghini knew it was going to take more than just a horsepower bump to top the leaderboard of what’s arguably the most challenging road course on the planet. So, engineers devised a multi-pronged strategy designed to enhance all the key elements of the Aventador’s performance, resulting in the track-focused iteration which became the Super Veloce Jota coupe.

These days, the debut of a drop-top variant of an automaker’s supercar not long after the coupe hits the streets is a foregone conclusion. But given the SVJ coupe’s hardcore focus, it’s still a bit surprising. Dynamic compromises can arise when the roof gets chopped. Will the SVJ’s no-holds-barred appeal be dampened in the pursuit of open-air thrills?

Limited to just 800 units worldwide with a starting price of $573,966, The Aventador SVJ Roadster is a showcase of Lamborghini’s latest and greatest road-going technology.

Like its hard-top counterpart, the SVJ Roadster is moved by a modified version of the Aventador’s 6.5-liter V12, now tuned to belt out 759 horsepower and 531 pound-feet of torque by way of revised cylinder heads, new titanium valves, and reworked intake runners. Power is routed to all four corners through a fourth generation Haldex all-wheel drive system, and cogs continue to be swapped via Lamborghini’s seven-speed single clutch automated manual transmission. It’s said to be good for a 0-60 mph sprint in 2.9 seconds, on the way to the Roadster’s 217 mph top speed.

If any model in Lamborghini’s lineup embodies the heart and soul of the brand right now, it’s this one.

That’s just a tenth slower than the coupe’s straight-line sprint, while matching it on the top end. Most of that extra mass can be attributed to the additional structural bracing needed to keep the chassis rigid without a roof. The removable top is a two-piece design constructed from carbon fiber that weighs in at 26 pounds and fits in the frunk.

The SVJ Roadster was designed to tackle corners just as well as it gobbles up tarmac, so as with the coupe, it benefits from the second generation of Aerodinamica Lamborghini Attiva, Lamborghini’s patented active aerodynamics system.

Taking active aerodynamics to a degree of sophistication beyond its rivals, ALA 2.0 not only increases downforce and reduces drag, it can also direct airflow to the inner wheels while cornering at high speeds to create more downforce on the unloaded side of the car, reducing the steering angle needed to keep the car pointed where you want through a turn.

As with all Aventador models, the SVJ Roadster benefits from a rear-axle steering system first introduced on the Aventador S. It turns the rear wheels in the opposite direction of the front wheels at lower speeds for improved agility and responsiveness. At higher speeds, both the front and rear wheels move in the same direction to enhance high-speed stability.

When it comes time to reign in the pace, you can call upon the standard carbon ceramic brake system, which consists of six-piston calipers and 15.7-inch discs up front and four-piston units paired with 15-inch rotors at the rear.

Inside, the Roadster doesn’t stray far from the SVJ coupe. As with the rest of the Aventador lineup, the cockpit-like design is divided by a large, elevated center console that houses the standard HVAC and infotainment controls, the jet fighter-like ignition button, and the drive mode selectors, the latter of which consist of four options – Strada, Sport, Corsa, and the user-configurable Ego mode.

The digital gauge cluster features lovely graphics and neat model-specific touches, like real-time ALA system info, that helps to bring a sense of occasion to the proceedings. The infotainment system in the center stack, on the other hand, looks dated. While its usefulness is significantly bolstered by a recent update that bought Apple CarPlay into the fold, it’s a bit more cumbersome to use than it should be, as it lacks touch support.

From the eye-catching paint hues to the wild aero elements, the Aventador SVJ Roadster is a car which demands the attention of everyone in the vicinity. And if the looks don’t cause folks to turn their heads, the engine certainly will.

While all of its rivals from Ferrari, McLaren, and Porsche have moved to turbocharging and hybridization, Lamborghini has stuck to its guns with the Aventador’s big, naturally aspirated, twelve-cylinder power plant. Although it’s a significant contributor to the Lambo’s abysmal 11 mpg combined fuel economy, it’s the reason the SVJ delivers power with more linearity – and sounds far better – than boosted power plants.

It sounds absolutely incredible, a characteristic that’s become increasingly rare in the era of forced induction.

Like the SVJ coupe, the Roadster is outfitted with a light-weight, center-exit exhaust system, and with the top off and the rear window lowered, it’s easy to understand why Lamborghini has resisted the trend. The mill howls to its 8500 RPM redline, reverberating its song off canyon walls and announcing every off-throttle maneuver with a lively snap, crackle and pop from those fire-belching pipes. It sounds absolutely incredible, a characteristic that’s become increasingly rare in the era of forced induction.

It should come as no surprise that since the Roadster is basically the SVJ coupe with a removable roof, it behaves much like its track-tuned, hardtop counterpart. As such, the car feels most at home driven hard, and it doesn’t come into its own until you’ve ventured into triple digit speeds.

Around town at typical commuter pace, the single-clutch gearbox is out of its element, with slow shifts that happen early and often. There’s pronounced gaps in power delivery with drive mode set to Strada, the most sedate of the Aventador’s options.

On the plus side, the suspension is surprisingly compliant, given the SVJ’s mission. I found that setting the dampers to Strada, the powertrain to Corsa (which includes manually-controlled shifting via the paddles), and the steering to Sport, yielded the most agreeable behavior in daily driving.

Out in the twisting tarmac surrounding the San Bernardino National Forest, where I could more closely replicate my on-track experience with the coupe, the SVJ Roadster was a joy. Even the gearbox makes sense out there, delivering near-instantaneous upshifts at wide open throttle with the kick of a bolt-action rifle.

All the effort Lamborghini put into the chassis becomes noticeable. Though the active aero only comes into play at speeds well beyond any legally permissible limit, the Aventador SVJ Roadster is a joy to hustle through technical corners thanks in large part to its fast steering rack, well-tuned four-wheel steering system, and the meaty Pirelli PZero Corsa tires it wears.

Under the right circumstances, it’s a thrilling, visceral thing to pilot, and ditching the roof adds another level of intensity.

For better and for worse, the Lamborghini has refused to follow many industry trends with Aventador. But with its successor likely to be announced within the next year or so and electrification almost certainly a part of its platform, the SVJ Roadster may prove to be not only the swansong for this era of the brand, but also for this untamed approach to modern supercar design.

You won’t find an experience like this on sale anywhere else right now. If you value the bliss of a high-revving V12 at full chat and have the means to partake, yes, you should definitely get one.

Want more options? Check out our favorite cars of 2020.