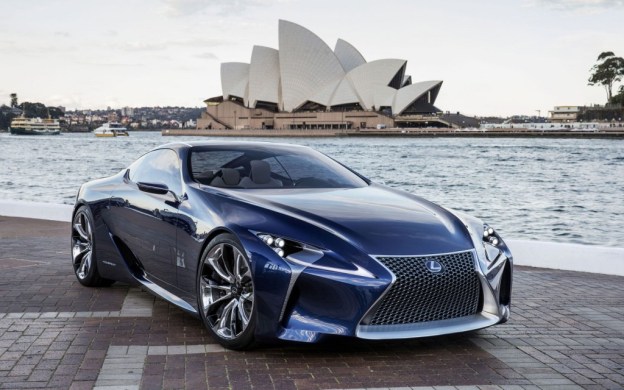 Back in August, Lexus teased a hybrid concept car that it planned to unveil at the 2012 Sydney Motor Show. Toyota’s upscale brand said the new concept would be based on the LF-LC coupe that debuted earlier this year in Detroit. No one thought Lexus would be this literal: except for its eponymous color, the LF-LC Blue concept is nearly identical to the original LF-LC.

Specifically, the color is Opal Blue, inspired by the opal mined in the Australian Outback. The LF-LC’s styling, virtually unchanged from the red Detroit concept, looks just as good in this Aussie hue. The “spindle” grille is Lexus’ new corporate trademark, and it looks as good as ever on this coupe.

The high tech interior from the original LF-LC also remains. Highlights include two 12.3-inch LCD touch screens that control vehicle functions, along with a third pop-up screen for good measure. Window switches were axed in favor of touch screens on the doors.

However, there are a few changes under the skin. Lexus’ Australian division says the LF-LC Blue is much lighter than the original concept, because it is made of carbon fiber and aluminum.

Lexus also felt inclined to explain the LF-LC Blue’s powertrain, but only a little. The company is now saying that the LF-LC is propelled by its Advanced Lexus Hybrid Drive, the same setup it uses in its production hybrids. The LF-LC Blue has an Atkinson-cycle engine and a smaller battery pack than any production Lexus, though.

Total system output is 498 horsepower which, combined with that lightweight chassis, should make the LF-LC decently quick.

Why did Lexus show the same car in a different color at Sydney? Perhaps the company wanted to bring a concept car to the show, but Sydney’s low status on the auto show totem pole didn’t warrant a brand new design.

On the other hand, Lexus may be inching closer to a production version of the LF-LC, or something like it. The fact that Lexus rebuilt the LF-LC with lighter materials, and decided to quote engine output, shows that it is thinking about this car in practical terms.

A production LF-LC would make an excellent “halo car,” attracting attention to the Lexus brand and showcasing its technology. It definitely prove that Lexus is a true luxury brand, and not just a purveyor of overpriced Toyotas.

Still, a production LF-LC is a long shot. As far as Lexus is concerned, this is just a concept car. The brand’s last major departure from the norm, the LFA, took years to build and ended up costing more than a Ferrari 599. Given that experience, one can see why Lexus isn’t jumping into another limited-production performance car project just yet.