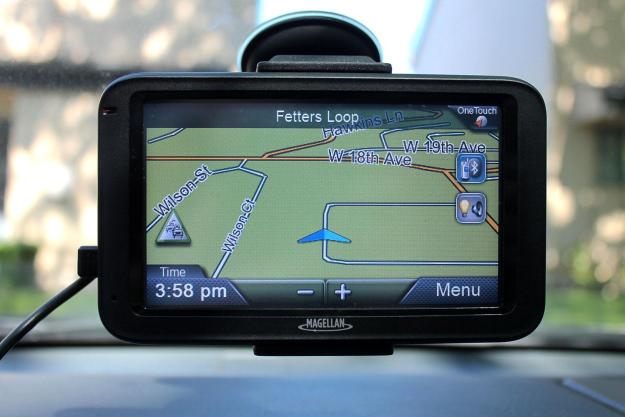 “Despite its bevy of standard features and clean 3D maps, the Magellan RoadMate's fickle accuracy means it may not be the GPS for you.”

As technology continues to improve, it’s a race to the top to see how many features a company can squish into one product. Because of this, GPS units are becoming more expensive and more complex by the minute.

For those looking for something well-priced but still moderately equipped, there needs to be a solid pool of navigation products from which to choose. If you don’t need the extra trimmings, you shouldn’t have to pay for them. Enter the Magellan RoadMate 5375T-LMB.

Despite its competitive price point, the $199 RoadMate is far from entry-level. I discovered this shortly after I attached the sleek 5-inch screen to my windshield and booted it up, accessing the array of applications and settings in the Magellan’s toolkit. Maps with 3D rendered buildings, Bluetooth compatibility, lifetime traffic updates, and multiple point-of-interest (POI) menus are just some of what the device has to offer.

I decided to test the RoadMate on a jaunt to a local watering hole (the swimming kind, not the drinking kind), because — well, it was a nice day for a drive. The voyage east from Eugene, Oregon to the gorgeous Tamolitch, or “The Blue Pool,” would also give me a mix of city, rural, and backroad driving, all of which would show me what the little guy was made of. Let’s dive in.

The 5375T-LMB doesn’t have it all: There’s no integrated dash cam or the driver assist features seen in more expensive devices. But Magellan has included several functions worth experimenting with.

For example, there are many ways to pull up your destination, including Find Intersection, Find Address, and POI searching, but I clicked through the menus to locate the Search By Name tab. It didn’t have “Tamolitch Blue Pool” or the nearby hot springs in its database (to be fair, they are quite remote), so I plugged in the address for a nearby hotel.

On the way, I got to know the Magellan’s basic navigation capabilities. The device worked very well in the city, with a touchscreen that refreshes promptly, though not as quickly as other products I’ve used.

The Junction View and Smart Detour functions are particularly useful. Junction View displays a realistic image of freeway signs, mirroring the road ahead, and then adds an animated arrow to help the driver select the optimal lane. This makes traversing unfamiliar freeways a snap.

An animated arrow helps the driver select the optimal lane.

Smart Detour automatically reroutes the driver if traffic suddenly slows or stops, making sure you’re always on the most efficient path to your stopping point. If you want traffic updates on demand, simply hit the icon on the main screen and the RoadMate will scour the landscape for construction sites, slowdowns, and accidents. This is a great option to use before heading out for work.

The RoadMate also has your back when it comes to law enforcement. It sends the driver audible and visual alerts when approaching red light and speed cameras, and its GPS display posts the local speed limit at all times. The integrated Bluetooth connection can also turn the RoadMate into a speakerphone, keeping your eyes on the road and the cops off your case.

As we got closer to Tamollitch, things became a little less rosy. The Magellan had issues finding the correct path in rural areas, changing routes frequently. Furthermore, when I zoomed in to the max resolution, I noticed that the positions of certain cross streets were off relative to our location.

Additionally, the search interface could be more intuitive. It couldn’t understand “Friendly St. Market,” but “St” without the period worked just fine. Once you get the hang of the device’s mannerisms, it’s easy to navigate, but again, it could perform better.

After returning home, I continued to question the POI capabilities of the Magellan RoadMate. I plugged in the names of a few local destinations, including a chiropractic office, cider house, and ballet studio; I was disappointed to see that it couldn’t locate any of them. Larger businesses, however, were triangulated with ease.

Because of this, I used the One Touch feature often, which allows you to gather all your favorite destinations in one place. This cuts down on time spent plugging in each address manually, but the less than intuitive POI functions are an unfortunate drawback.

But does it stand out from a crowd?

Magellan CPBCKUSGXXX Wireless Back Up Camera ($137)

The Magellan RoadMate 5375T-LMB is backup camera accessible, but the product is sold separately. Magellan’s wireless unit has a 45-foot range and is user-adjustable downward up to 45 degrees.

Magellan’s weighted beanbag mount provides an alternative to windshield mounting, keeping your view of the road ahead clean and clear.

To help keep you safe during a breakdown, this roadside assistance kit features warm fleece gloves, emergency candles, a folding shovel, an ice scraper, a whistle, and first aid supplies.

Contrast the 5375T-LMB with its competitors and it shines in some ways — and fails in others.

The Garmin nüvi 2597LMT, for instance, has the same price tag and 5-inch screen size. It doesn’t have the 3D maps or speed camera alerts of the Magellan, but it does offer Bluetooth, free map updates, traffic alerts, and voice control.

Even though it’s finicky sometimes, voice-activated nav can be hugely convenient when you’re taking the so-called scenic route. Nobody wants to pull over every 5 minutes to type in directions, and fiddling with it while driving certainly isn’t ideal. Given the identical cost, Garmin’s voice command functions might give it the edge.

Another combatant standing across the proverbial ring is the TomTom Go 500, which equips the standard 5-inch screen with 3D maps, active lane guidance (similar to Junction View), free map updates, and voice control. It’s the same price as the other two, but there’s no Bluetooth function to be found. Also, it can only help with traffic when paired to a smartphone.

Simply put, the Magellan RoadMate 5375T-LMB is a good, but not great entrant into the mid-range GPS field. Its Bluetooth capability, 3D maps, and clear metropolitan navigation give it the makings of a standout product, but poor POI functions and lack of voice control are shortcomings too big to ignore.

That said, with its competitive price point, you should have no problem finding great deals online. If you can manage to knock off a few dollars, the RoadMate is definitely worth a shot.