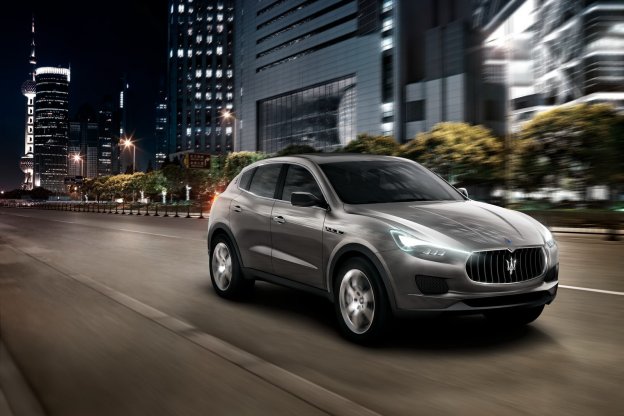 The Maserati Levante will be an Italian rival to sporty luxury SUVs like the BMW X6 and Porsche Cayenne, company insiders told Autocar. In other words, it will be more “Maserati” than “SUV.”

Autocar confirmed that the Levante, foreshadowed by the 2011 Kubang concept (pictured above) and set to go on sale in 2015, will be designed for on-road driving pleasure, despite its Jeep Grand Cherokee underpinnings.

It will also draw heavily on Maserati’s two sedans, the recently redesigned Quattroporte and the all-new Ghibli, especially in terms of what’s under the hood.

Many European buyers will probably flock to the more fuel-efficient 271 hp 3.0-liter turbodiesel V6, which is shared with the Ghibli, although, with Porsche importing a diesel Cayenne to the United States, it could get traction here as well.

The only available transmission will be an eight-speed automatic, coupled to a version of Maserati’s Q4 all-wheel drive system. Both items are shared with the Quattroporte and Ghibli.

However, Maserati may turn to its American cousin Jeep to tune the Levante’s all-wheel drive for some level of off-road ability.

The Jeep connection is where things start to get fuzzy. Previous reports stated that the Levante would be based on the Grand Cherokee, but it will apparently also incorporate elements of the Quattroporte and Ghibli in its chassis as well.

Honestly, we’d prefer our Maserati SUV to have more in common with the Quattroporte than the Grand Cherokee, but since the two are based on different platforms, it’s unclear how the two elements will work together.

So far, it looks like the Levante will have weight-saving aluminum body panels like its Trident-badged brethren; definitely a good thing for a big SUV.

It will also apparently share some electronic components with Chrysler and Jeep models. Hopefully Levante buyers won’t be staring at the same UConnect screen as those plebeian models, through.

While the idea of a Maserati SUV was introduced with the 2011 Kubang concept, the production Levante could look very different. Maserati says the Kubang hints at the Levante’s “visual character,” but that’s all.

Given the superstar looks of the Ghibli, Quattroporte, and GranTurismo, we believe the Levante will put its German luxury competition to shame in the styling department.

The Levante is expected to go on sale in the first half of 2015. It was originally slated to be built alongside the Grand Cherokee at Jeep’s Jefferson North assembly plant in Detroit, but increased Jeep demand caused Fiat-Chrysler to move production to Italy.

Are you ready for a Maserati SUV? Tell us in the comments.