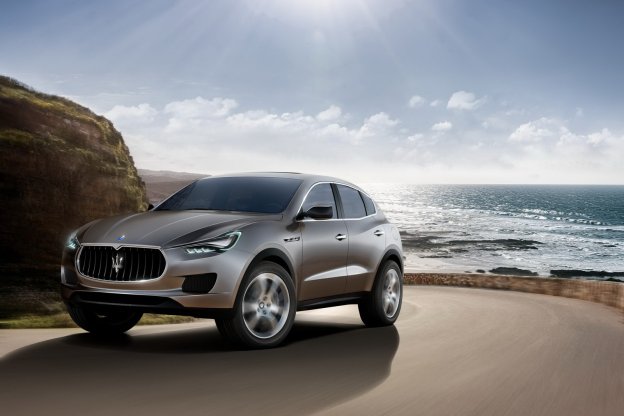 Purists who may have been distracted by Maserati’s redesigned Quattroporte sedan may have forgotten about the Italian sports car brand’s plans to build not one, but two SUVs. They’ll be disappointed to know that an SUV will wear the Trident badge, but it will be built at a different factory and could be rebadged as an Alfa Romeo.

The Maserati Kubang debuted as a concept at the 2011 Frankfurt Motor Show, and it’s been haunting the dreams of people who remember the brand’s race-winning Formula 1 cars and gorgeous grand tourers ever since. Maserati subsequently changed the crossover’s name to Levante, which sounds much sophisticated, and it seems to be sticking.

Other things are changing, though. The Levante is supposed to be based on the Jeep Grand Cherokee (itself derived from an old Mercedes-Benz M-Class platform), so it was assumed that both vehicles would be built at the same factory, Chysler’s Jefferson North assembly plant in Detroit.

Marchionne said Fiat will invest $1.63 billion in a “relaunch” of the Maserati brand, and that will likely include an investment in the Turin plant to get it up to speed. It also lays the groundwork for an interesting scenario.

If Miafiori can sate buyers’ demands for Levantes, Fiat might use the extra capacity to build a rebadged Alfa Romeo version. An Alfa SUV sounds about as a sacrilegious as a Maserati SUV, but it might be just what the brand needs.

Alfa showed an SUV concept, the Kamal, at the 2003 Geneva Motor Show, and it was linked to one of the brand’s many attempts to return to the United States. It never made it to production, but a reincarnated version could help Alfa exploit a potential U.S. beachhead.

Alfa’s latest attempt will begin with the 4C, but a luxury crossover will make more money than a mid-engined sports car, even when it seems out of character. The Cayenne has been a moneymaker for Porsche, which is probably why Maserati is building the Levante in the first place.

An Alfa Romeo SUV is still just an idea, but the Levante is expected to debut sometime in 2014 and reach dealers by calendar year 2015 at the latest. Maserati may also build a smaller SUV, set to take on Porsche’s Macan, as a follow-up.

Every car compatible with Apple CarPlay