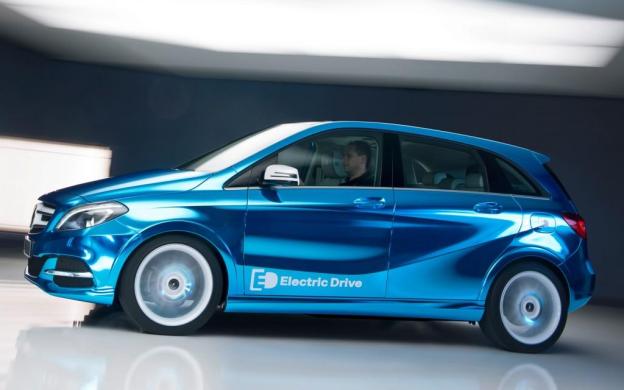 Mercedes-Benz is getting into green cars in a big way, and the compact B-Class seems to be its platform of choice. Mercedes already announced that it would bring a natural gas-powered B-Class to the Paris Motor Show, and now it has confirmed that it will show the B-Class Electric Drive was well.

Mercedes has been experimenting with electric cars for some time (including selling a golf cart-like Smart Electric Drive), but the B-Class Electric Drive will be the first production-ready EV to wear the three-pointed star. Early reports said the car would have an electric motor and battery pack from Tesla Motors, but Mercedes has not confirmed this (Mercedes parent Daimler owns a percentage of Tesla).

The B-Class Electric Drive will be motivated by a 100kW electric motor with 229 lb-ft of torque and a lithium ion battery pack. Its range is reportedly 124 miles, putting it comfortably ahead of mainstream EVs like the Nissan Leaf (73 miles), but behind the Tesla Model S, even the entry level version (160 miles).

At least two charging options will be available: 230v and 400v. We’ll have to wait for the B-Class Electric Drive’s Paris debut for charging times and performance numbers.

Like the B200 Natural Gas Drive, the B-Class Electric Drive takes full advantage of Mercedes’ new Energy Space modular platform. This design can be reconfigured to package different types of powertrains in the same car. In the case of the electric B-Class, the battery pack is set in the floor in front of the rear axle, preserving interior space.

The redesigned B-Class will be coming to the United States, and the B-Class Electric Drive will make the trip over with the rest of the lineup. When it does arrive, probably during calendar year 2014, it will split the difference between mainstream EVs and the luxurious models from Tesla. As an entry-level Mercedes, the B-Class Electric Drive will offer a more upscale feel than a Leaf or Ford Focus Electric, but won’t reach Tesla’s level of performance or price.

Mercedes-Benz can trace its lineage back to the first practical internal combustion vehicle, but if electric cars really are the future, the maker’s of the world’s first car seem ready to change with the times.

Topics
We need more 7-passenger EVs, but the 2023 Mercedes EQS SUV has room to improve
2023 Audi Q4 E-Tron first drive: the predictable and traditional EV SUV we need
Lux and refreshingly livable, Mercedes’ EQE moves EVs mainstream
Tesla to fix window software on 1M of its U.S. cars
Cruise’s robot taxis head to Arizona and Texas
Uber says it’s investigating ‘cybersecurity incident’
Nvidia’s Drive Concierge will fill your car with screens
The Uber hack is an outrageous tale of a teen hacking for fun
How to watch Tesla’s AI Day tonight and what to expect
Tesla AI Day 2022: Optimus, self driving cars, and everything else announced
Tesla hopes full self-driving beta will be out globally by the end of 2022
Elon Musk reveals first delivery date and customer for Tesla Semi truck
Nissan wants the 2023 Ariya to be its comeback EV, but the bar has been raised