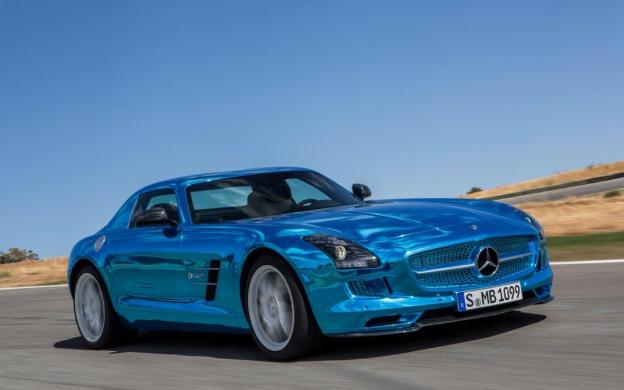 Replacing the SLS AMG’s 6.2-liter V8 are four electric motors, connected to an “axially-arranged” transmission and a 60-kWh lithium ion battery pack. The transmission, which Mercedes calls AMG Torque Dynamics, makes the electric SLS all-wheel drive and can power or brake wheels individually depending on conditions.

Combined, the four motors produce 740 horsepower and 738 pound-feet of torque. That’s much more than the gasoline-powered 2013 SLS AMG GT, which produces 583 hp and 489 lb-ft. It also makes the SLS AMG Electric Drive more powerful than a Lamborghini Aventador.

With so much power on tap, it’s not surprising that Mercedes is claiming the SLS AMG Electric Drive as the world’s fastest production electric vehicle. The company says its gull-winged creation will do 0 to 62 mph (o-100 kph) in 3.9 seconds, and reach a limited top speed of 155 mph. That makes the electric SLS much slower than the SLS GT, despite the extra power. The SLS AMG GT will do 0 to 60 mph in 3.6 seconds and reach a top speed of 197 mph.

So far, the only serious competition for the SLS AMG Electric Drive is the Audi R8 e-tron. The Audi’s top speed is limited to 125 mph, although a test car’s was raised to 155 mph for a record-setting Nürburgring lap.

The liquid-cooled battery pack consists of 864 individual cells in 12 modules, and was developed by the same people who made the Kinetic Energy Recovery System (KERS) regenerative braking for Mercedes’ Formula 1 cars.

A full charge from a standard European household outlet takes 20 hours, but Mercedes will offer a 22 kW quick charger that cuts charge time down to three hours. The SLS AMG Electric Drive has a 155-mile range, although it probably won’t get that far if driven enthusiastically.

If the car does run out of juice on the highway, that bright blue paint (an Electric Drive exclusive) should alert passers by to the driver’s plight. Besides the paint, there is little to distinguish the Electric Drive from a regular SLS AMG coupe. The electric SLS get a carbon fiber front splitter, a rear diffuser, and a grille with “bionic honeycomb-shaped” vents.

However, under the skin, there are more significant modifications. The body is a carbon fiber monocoque bonded to the stock SLS’ aluminum chassis. To accommodate the electric drivetrain, the regular SLS’ double-wishbone suspension was replaced with a multi-link setup.

The AMG engineers also needed to recreate an important aspect of the V8 SLS: sound. Electric motors are very quiet, and that is a problem for both pedestrians (who won’t hear it coming) and drivers (who will miss out on the aural experience). AMG designed different sounds for startup, wide-open throttle, and cruising, which play through the car’s speakers.

The SLS AMG Electric Drive goes on sale in Europe next year for roughly $536,000, or more than 2.5 times the cost of a regular SLS. Green speed is possible, but it doesn’t come cheap.