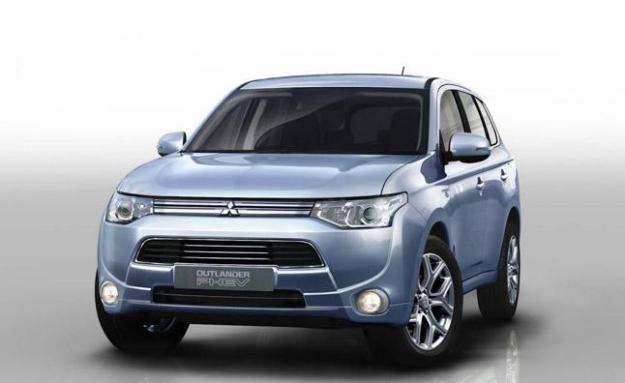 Mitusbishi makes some interesting products, but not many of them. The sporty Lancer Evolution and the cheap-but-impractical i-MiEV front a small line of obscure sedans and crossovers. The Japanese company desperately needs to flesh out its lineup. A plug-in hybrid version of the Outlander crossover, set to debut later this month at the Paris Motor Show, could help.

Mitsubishi says the Outlander PHEV offers “the best of three worlds” because it combines zero-emission electric power and a gasoline range extender, with the added bonus of an SUV’s utilitarian body. The company says the Outlander is the world’s first plug-in hybrid SUV, although Volvo has shown an XC60 plug-in concept at past auto shows.

Like other SUVs, the Outlander PHEV will have all-wheel drive, but thanks to Mitsubishi’s “Twin Motor 4WD System,” it won’t have the heavy driveshafts and differentials of a normal 4×4. Instead, a separate electric motor powers each axle.

According to Mitsubishi, the electric motors will be more responsive than a conventional setup, and because they make all of their power at low speeds, they will help the Outlander accelerate faster.

Providing the juice for those motors will be a 2.0-liter four-cylinder gasoline engine with Mitsubishi’s MIVEC variable valve timing. The 12 kWh lithium ion battery pack gives the Outlander PHEV an electric-only range of 34 miles, with a total range of 547 miles.

The batteries can be rejuvenated on a quick-charge cycle, reaching 80 percent capacity in just 30 minutes. A full charge on a normal cycle takes 4.5 hours.

Like other plug-in hybrids, the Outlander PHEV can automatically switch between different drive modes, relying on its batteries or gasoline engine for power depending on the circumstances.

Drivers can also activate a Battery Charge Mode, which turns on the gasoline engine when the car is stationary or cruising under electric power, to keep the batteries topped up.

The world’s first production plug-in hybrid SUV will be an oddball addition to an oddball lineup, but this time with a purpose. If the i-MiEV’s appeal is limited by its small size, the Outlander PHEV actually broadens the appeal of plug-ins by offering the technology in an America-friendly SUV body.

The Outlander PHEV in Mitsubishi’s press release wears a different front end from the current American version, but Mitsubishi does plan on selling the car worldwide. It goes on sale in Japan in early 2013, and Europe and America shortly after that.

The Outlander PHEV will make its public debut at the Paris Motor Show, which opens September 27. Expect more details on this plug-in SUV at that time.

Topics
5 stunning electric SUVs that prove you don’t need to spend $100K for luxury
No mere EV, the sensor-stuffed EX90 is Volvo’s towering tech flagship
Business upfront, 31-inch TV in the back. BMW’s electric i7 is a screening room on wheels
GMC poured all of its truck-making expertise into the Sierra EV pickup
Uber says it’s investigating ‘cybersecurity incident’
Nvidia’s Drive Concierge will fill your car with screens
The Uber hack is an outrageous tale of a teen hacking for fun
Tesla to fix window software on 1M of its U.S. cars
Lux and refreshingly livable, Mercedes’ EQE moves EVs mainstream
How to watch Tesla’s AI Day tonight and what to expect
2023 Audi Q4 E-Tron first drive: the predictable and traditional EV SUV we need
We need more 7-passenger EVs, but the 2023 Mercedes EQS SUV has room to improve
Tesla AI Day 2022: Optimus, self driving cars, and everything else announced