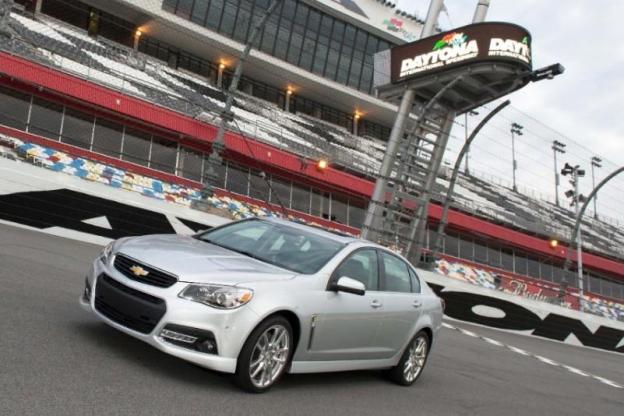 Following its debut at Daytona early this year, Chevrolet has announced that pricing for the new 2014 Chevrolet SS  performance sedan will start at $44,470, including a $995 destination charge.

The U.S.-exclusive Chevy goes on sale later this year and is the American carmaker’s first rear-drive performance car since 1996, the last year of the popular Impala SS.

Hoping to appeal to buyers who crave power but likely can’t swing selling the idea of a Corvette as a family car, the SS comes equipped with a 415 horsepower V8 with 415 lb-ft of torque with an estimated 0 to 60 mph time of around five seconds.  The engine is matted to a six-speed automatic transmission that can be shifted manually using steering-wheel mounted shift paddles.

Although, it still would be interesting to track some of the response to the car on sites like the 20,000 plus member Impala SS Forum considering Chevrolet probably won’t be building a new SS based on the new the Impala.

The carmaker, however, must clearly be aware of the appeal of the “SS” badge as a  means of enticing people to consider the Impala.  Chevrolet’s own consumer site for the new Impala includes the words “Sports Sedan” in the html link, which implies that there might be an actual Impala SS model available – or at least one on the way.

Okay, maybe I’m just reading too much into it due to my disappointment after recently test driving the 2014 Impala (which I like a lot) that Chevy isn’t building a SS model of the car. I’ve always been a big fan of the Impala SS, which still holds a lot of clout as a classic big body American muscle vehicle.

Of course, none of those throwbacks ever had features that come close to the kind of technology offered in Chevy’s latest reincarnation of a rear-wheel-drive sedan.

Still, I’m wondering what die-heart Impala SS fans will think of Chevrolet’s new performance sedan? Or, does it matter considering that the car is likely aimed at a new generation of buyers?

Mercedes-Benz GLC-Class takes a subtle approach to tech
Lucid doubles down on horsepower with the Air Grand Touring Performance
Maserati is going electric, and it’s starting with a 1,200-hp luxury coupe
Mercedes-AMG EQE proves performance EVs are here to stay
Uber says it’s investigating ‘cybersecurity incident’
Nvidia’s Drive Concierge will fill your car with screens
The Uber hack is an outrageous tale of a teen hacking for fun
Tesla to fix window software on 1M of its U.S. cars
Lux and refreshingly livable, Mercedes’ EQE moves EVs mainstream
How to watch Tesla’s AI Day tonight and what to expect
2023 Audi Q4 E-Tron first drive: the predictable and traditional EV SUV we need
We need more 7-passenger EVs, but the 2023 Mercedes EQS SUV has room to improve
Tesla AI Day 2022: Optimus, self driving cars, and everything else announced