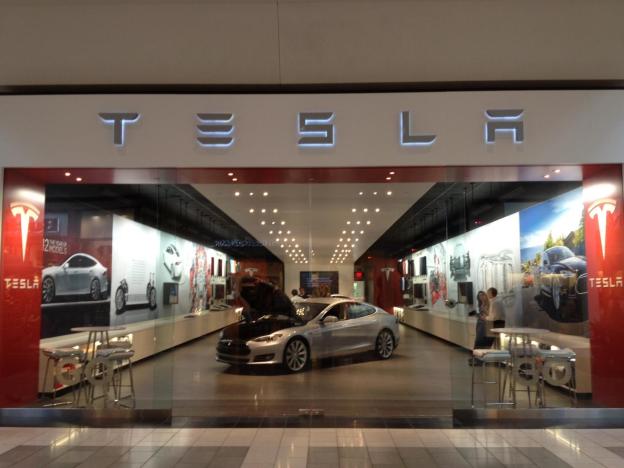 Tesla Motors’ unorthodox retail store business model is creating a lot of controversy. The EV manufacturer has already fought dealer associations and state legislatures from Massachusetts to Texas, and now the battle is moving to North Carolina.

A proposal in the North Carolina state legislature would make it illegal for Tesla, or any other carmaker, to sell directly to customers, the state’s News & Observer reports.

The measure, which is supported by the North Carolina Automobile Dealers Association, was approved by the state Senate’s Commerce Committee last week.

If the proposal becomes law, Tesla would be forced to change its sales strategy or stop selling cars in the Tar Heel State.

Instead of selling cars through conventional dealers, Tesla opens Apple Store-like spaces in malls and shopping centers, with all transactions conducted over the phone or online, and routed through the company’s California headquarters.

That last part has allowed Tesla to dodge claims that it is opening its own dealerships, which is illegal in most states. The Tesla Stores don’t actually sell (or service) any cars in states where that practice is illegal; they direct customers to online ordering and standalone service centers.

However, North Carolina’s legislators are claiming that any direct sale that cuts car dealers out of the loop, whether it takes place in a physical showroom or online, is against the law. Tesla doesn’t have any mall stores in North Carolina, only service centers.

“They’re trying to insulate the dealer franchise model from any competition,” Tesla vice president for corporate and business development Diarmuid O’Connell said during a visit to Raleigh, “It’s a protectionist move to lock down the market so we have to go through the middleman – the dealer – to sell our cars.”

As with previous cases, the North Carolina car dealers argued that Tesla’s Apple-style sales model would set a precedent for corporate dealerships, leaving customers to deal directly with large car companies instead of a local franchisee.

“The whole point of the retail system is to protect the consumer,” Robert Glaser, president of the North Carolina Automobile Dealers Association, told the News & Observer.

The Tesla Stores have attracted controversy literally from the beginning.

Last September, Tesla was notified by the Illinois Secretary of State’s office that listing company CEO Elon Musk as the owner of a Chicago store was illegal.

In April, Tesla also drew fire from Texas legislators examining the legality of two stores in the Lone Star State. Musk fired back with an offer to produce electric pickup trucks in Texas.

Tesla currently has 28 stores in 13 states.

Is Tesla breaking the law – or should the law be changed? Tell us in the comments.

Topics
Test drives and cell phone shopping make or break car sales for U.S. Hispanics
Elon Musk signals another delay for the Tesla Roadster
Tesla Cybertruck delay means it won’t hit the road until next year
Elon Musk reveals how non-Tesla EVs will use Superchargers
Uber says it’s investigating ‘cybersecurity incident’
Nvidia’s Drive Concierge will fill your car with screens
The Uber hack is an outrageous tale of a teen hacking for fun
Tesla to fix window software on 1M of its U.S. cars
Lux and refreshingly livable, Mercedes’ EQE moves EVs mainstream
How to watch Tesla’s AI Day tonight and what to expect
2023 Audi Q4 E-Tron first drive: the predictable and traditional EV SUV we need
We need more 7-passenger EVs, but the 2023 Mercedes EQS SUV has room to improve
Tesla AI Day 2022: Optimus, self driving cars, and everything else announced