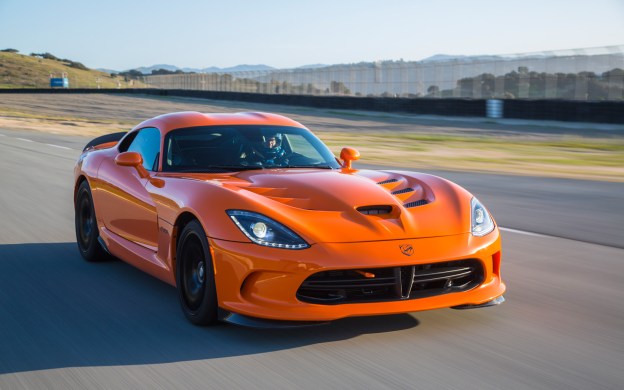 The 2013 SRT Viper may be a 640 horsepower sports car with side exhaust and the name of a venomous snake, but it’s only the beginning.

Traditionally, Chrysler continues to roll out faster, more hardcore versions of each generation of Viper during its life cycle. The first step in that evolution is the 2014 SRT Viper TA, which will be unveiled at the 2013 New York Auto Show next week.

The current, fifth-generation Viper was intended to be more luxurious than its predecessors, so SRT could lure buyers away from Porsche and Ferrari. That’s not the case with the TA, which does without leather seats or an audio system. It’a basically a new version of the hardcore Viper ACR that closed out the last Viper’s run, and set a Nürburgring lap record.

Like the ACR, SRT only includes equipment that increases this Viper’s performance. An exterior aerodynamics package includes carbon fiber front splitters and a rear spoiler. Bigger Brembo brakes help the Viper TA stop faster. A carbon fiber engine x-brace and the replacement of badges with stickers saves (some) weight.

SRT also tuned the Viper GTS’ adjustable Bilstein Damptronic suspension for the track. The ride is now much firmer and any softness has been dialed out of the system’s programmable driving modes.

One option that doesn’t make the Viper TA faster but is still pretty cool is its paint. Only 33 cars will get the custom Crusher Orange hue when the TA goes on sale later this year.

The TA name should sound familiar to Mopar fans. Like this Viper, the 1970 Dodge Challenger T/A/ was built for the track. It was Dodge’s homologation car for Trans-Am racing, battling Ford Mustang Boss 302s and Chevrolet Camaro Z/28s both on the track and in the showrooms.

In a sign of changing times, TA now stands for “Time Attack” instead of “Trans-Am.” Time Attack is a popular form of motorsport where the only goal is to set the fastest time around a given track. It sounds like something the Viper would be good at.

How much will killing time cost? SRT isn’t holding fast to any number, but expect this minimalist Viper to cost more than a bells-and-whistles car, which starts at $97,395.

The best cars for teens
The best BMWs of all time
Future cars: The best upcoming cars worth waiting for
Want to join the Android Army? Here are all the cars with Android Auto
Mercedes issues urgent do-not-drive recall for 292,000 SUVs
Bluetooth hack compromises Teslas, digital locks, and more
EV glossary: All of the electric vehicle jargon you need to know
How do electric cars work? EV motors and batteries explained
SpaceX announces Starlink for RVs, with no wait for dishes
Waze finally adds Apple Music to its audio player
Insta360 cameras take a speedy ride around Monaco’s F1 track
Buick announces plan to go all-electric with stunning EV concept
Mercedes-Benz GLC-Class takes a subtle approach to tech