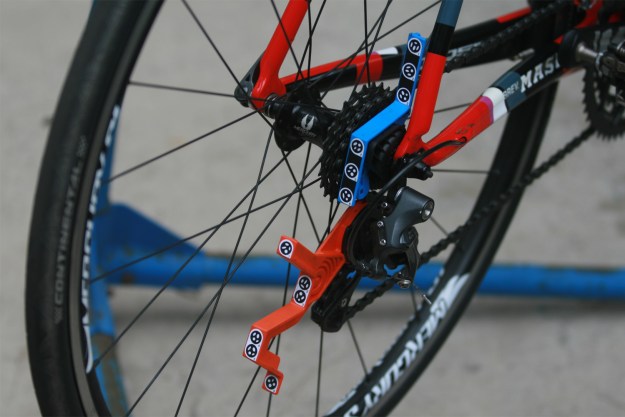 “Otto simplifies tuning your bike, but has its own learning curve.”

Every group ride has one or two of them — cyclists whose every shift sounds like a steel-toothed beaver is gnawing on their cassette. More often than not, these riders are oblivious to the grindcore soundtrack blasting from their rear derailleurs, almost as if they believe those sounds are simply part of riding a bike.

They are not. A well-tuned drivetrain should be quiet, smooth, and efficient. Yet few people who are aware of their problems feel confident enough to tune it themselves, thanks in part to bike mechanics who have made adjusting derailleurs seem like a dark art passed down in secret guild meetings over craft beer.

Otto, a Wilsonville, Oregon startup, is hoping to unlock that secret knowledge from the backshop Gods and put it into the hands of anyone with an Apple iOS smartphone, like Prometheus with fire.

The Otto hardware consists of two plastic attachments marked with “engineered gauges” that look to be borrowed from the side of a crash test dummy’s head. By snapping a shot of these gauges in Otto’s smartphone app, it computes the exact alignment of the rear derailleur. After that “index score” is calculated, the app can dish out step-by-step audio and video instructions for bring it back into perfect alignment.

The Otto tuning system features two different operations — check and tune. In check mode, Otto will analyze the derailleur and score it on a plus or minus scale, with 0.00 being perfect. Using the check function is free. Tune mode, however, has two options: a free “quick” tune (barrel adjustment only), or a “complete” derailleur adjustment (including limit-screw adjustments) that requires an in-app purchase of $4 for seven days of use, $12 for a month, or $27 for a year. That’s in addition to the $39 purchase price.

One kit handles Shimano and SRAM 10- and 11-speed cassettes, another handles 9-speed cassettes. These kits also work on 2x mountain bike derailleurs. The Otto system is not, however, compatible with Android phones, nor Campagnolo derailleurs and cassettes.

The Otto we tested arrived in a foam-lined cardboard box with two plastic gauges — the orange that attaches to the top pulley of the derailleur and a blue gauge that slips around the axle between the frame and the cassette. The inside of the box features a gauge registration QR code and a five-step start-up guide.

After downloading the free Otto iOS app from the Apple App Store, we were asked to create an account and answer questions relating to the make and model derailleur and cassette we wanted to check. Profiles can be added as needed and saved by bike name, allowing for quick checks on many different derailleur and cassette options (for those with a large stable of bikes).

Otto might also be the perfect gift for that cyclist whose noisy derailleur is driving the peloton insane.

Once the app is installed and launched, it asks to read the QR code located on the inside of the box to automatically select the proper phone and gauge settings. Following that, Otto begins the step-by-step instructions for installing the gauges.

Our first time through the alignment check did not go as smoothly as we’d hoped. The app clearly instructs you to shift the chain to the gear “three clicks down” from the largest on the rear cassette, but in the videos showing gauge placement, the chain is shown sitting on the smallest gear. Which is correct? Being more visual learners, we followed the videos and clicked into the smallest gear. Wrong guess. The test returned an index score that was way out of range for a perfectly working derailleur.

Getting those alignment readings can also be tricky. Thanks to some auto focusing and lighting issues with the iPhone’s rear camera, Otto uses the front-facing selfie camera to read the targets on the gauges. That means have to hold the phone behind the wheel, with the screen facing you, then cram your head up against the frame to see it. Since you can’t see the gauges from this position, you need to rely on the phone screen to align the camera properly, making all your movements in reverse as if you were working in a mirror.

After our first failure, we started over from the beginning, following only the audio instructions this time, and left the chain the ring three clicks down from the largest gear on the cassette. This seemed to make installing the orange gauge properly a bit easier, and resulted in an index score of 0.042 – not too shabby. We followed the suggested instructions to get the alignment even closer with a quick tune, but were unsuccessful in getting a lower score.

Turns out 0.042 is a pretty well tuned derailleur. We wanted to see what Otto could do with a real gear grinder, so gave the barrel adjuster a bunch of turns the other way until it started failing to shift and skipping gears. We were ready for Otto to work some magic with a full $4 complete tune.

The complete tune works like an extended index check, and includes limit-screw adjustments. Otto gives step-by-step audio instruction and then asks for the gauges to be installed so the targets can be measured. After each measurement, the app gives instructions to make an adjustment and then says “Show me the targets,” to do another measurement.

Our first run took about 20 minutes, and included countless gauge installations and removals, a frustrating flurry of “show me the target” commands, and ultimately, a non-functional drivetrain. When we reached the last step of the tune, the app insisted we weren’t in the right gear, even though we were. It turns out if the limit screws are too much out of range before beginning a tune, things go sideways quickly. Apparently, ours were out there.

According to an Otto spokesperson, version 2.2.6 of the app will fix this limit screw problem, but in the meantime we’d need to manually adjust the limit screws into range, and then start over from the beginning. On the second time through the complete tune, Otto’s demanding commands for us to “Show me the targets” had us dreading every single measurement, but we persevered. After blindly following her exact directions about limit screw adjustments, barrel turns, and shifting (and absolutely no thinking on our part), Otto pulled our clanging derailleur back into tune like it was magic.

When we finished running through the tune, we checked our work with an index check. After scoring a -1.419 while out of tune, Otto got us back to 0.084. It wasn’t back to 0.042, but it shifted smooth and silently.

The Otto is a clever, thoughtfully designed piece of bike tech that shows what can be created when talented people create smart products. Despite our initial frustrations, it’s clear that the system can work, as long as you use it within its parameters, and approach it with patience.

It’s not for everyone. As we discovered, there’s a learning curve, even for a tool designed to flatten the learning curve. And a quality derailleur can go thousands of miles without needing any adjustment at all, so having a $39 tool that tells you to turn the barrel adjuster one click to the left, or right isn’t exactly a mandatory addition to your bike toolbox.

Otto might be best for casual riders who want to handle their own maintenance, but need some help to do it properly. The $39 price pays for itself after just one DIY tune up you don’t pay a bike shop for, and it’s a small price to pay for drivetrain peace of mind.

And for that cyclist whose noisy derailleur is driving the peloton insane? Think about giving it as a gift.