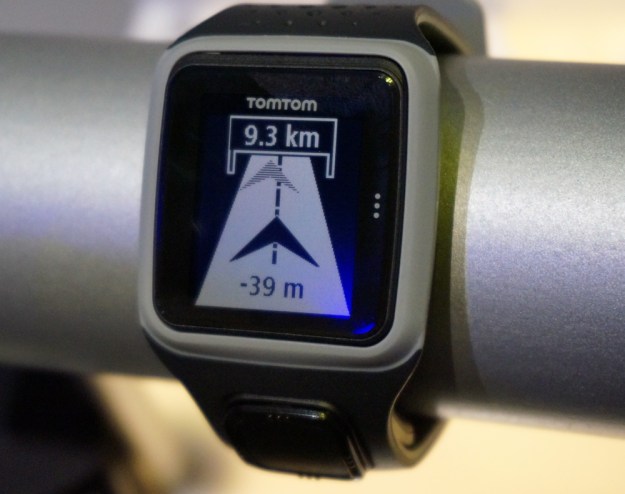 The lead up to TomTom’s launch event in Amsterdam yesterday was fairly secretive by the company’s standards, and mostly because it was a question of what it could show that would capture some headlines and garner some sorely needed attention. After all was said and done, it looks like TomTom will be testing the waters in branding itself as a company you’ll trust outside of your car, too.

This strategy currently rests on the new smartwatch line unveiled at the event, aptly called Runner and Multi-Sport. TomTom figures that the smartwatch category, which already has some established players in the game, is in need of the right kind of simplicity. In other words, there’s no need to get fussy with a lot of buttons when just one should do the trick. After all, if you’re actually supposed to use it while doing something athletic, shouldn’t it be super user-friendly?

It was a pretty convincing argument, but whether the two smartwatches deliver on that promise will have to wait until they come to market in the U.S. in the summer. On the surface, there’s some compelling stuff to like. Just 11.5mm at the thickest point, and weighing only 50 grams, these are noticeably lighter and svelte than those from competitors. The one, all-purpose button sits below the display and manages every task needed to get the thing to work. TomTom smartly placed the GPS receiver right behind the button, so that it faces skyward a lot more.

The screen itself also seems to keep things simple, with meters, graphs and charts to measure progress. One cool thing they’ve added is a marker that remembers where you finished your last run, and appears again when you go on your next one and are approaching that distance. Big numbers, clear letters and basic feedback come together here to provide info that you can actually understand while you’re on the move. And it should be able to do all that for up to 10 hours on one battery charge.

Fully weather and waterproof, there is some durability to speak of here. Plus, the face and button can be detached and placed into a different color wrist strap, so accessorizing and fashion look to be part of all this in some way. You won’t get much out of the watches indoors, unless the activity you’re doing is already supported. For example, swimming is fine, and running on a treadmill at the gym is good, too, but that’s about it. The reason why is because the watches don’t pair with smartphones via Bluetooth, which means you can’t leverage the data connection from your phone to pull in info wirelessly from the watch. You can only sync with your PC or Mac, and that’s not wireless, either. The watches actually have Bluetooth, but it’s only there to enable pairing with the heart rate monitor TomTom is releasing as an accessory.

Runners, cyclists and swimmers — that’s who these watches were designed for. It makes sense because these are activities that usually measure progress by speed and distance, but if TomTom wanted to cater to a wider gamut of athletes, it could’ve found an innovative way to do that. Hey, they’re the ones who said they wanted to “be a brand choice for everyday athletes”, so that should theoretically include a lot more sports.

That still might happen, but this looks to be a bit of a gamble. TomTom almost certainly wants to be relevant as a brand outside of driving, though it hasn’t gone the same route as others who have lumped in certain household chores with exercises and sports. TomTom tried something that was somewhat like that in a partnership with Nike, but clearly that marriage didn’t last too long.

But a different marriage of sorts looks to be blossoming for the company, and that’s where driving meets traffic. TomTom did release a new set of portable navigation units, which might set off a collective yawn from most pundits, but it looks like there’s something here that will work differently.

The new flagship TomTom Go 6000 will have a 6-inch display, richer maps (with 3D renderings of buildings and landmarks), and come with free lifetime maps and traffic updates. Again, much of that has already been done, but the main difference is that live traffic updates have been enhanced, and are now free for the life of the device, not subscription-based, like HD Traffic was before.

To do this, TomTom has put in a 3G SIM card into the unit that will pull in traffic data from a number of sources TomTom automatically aggregates and pushes back down to your unit to put you on the right path. The kicker is that this feature transcends borders, so if you’re venturing up into Canada or heading south into Mexico, you can make use of the feature there because TomTom’s paying the roaming costs. It’s a lot like the always-on 3G connection Amazon uses in a couple of its Kindle e-Readers, where consumers can download books in any country without paying for the data.

A speed camera locator is also included here, but it will be on a three-month trial to start. Apparently, this will tell you where red-light cameras and speed traps might be, so you can drive accordingly and not take any chances. No word on what a subscription fee would be for this after the 90-day trial is up.

Another three PNDs were unveiled, too. They’re all the same, save for screen size. The GO 40, GO 50 and G0 60 are 4.3-inches, five-inches and six-inches, respectively. These three will undoubtedly be cheaper because they won’t have the SIM card built-in for always-on traffic. Instead, you’ll have to pair it with your smartphone and leverage data from that to get the same traffic information. That pretty much rules out roaming, so this is really for people who prefer to have it only for domestic driving and have the data plan to support it.

The maps look better, overall, with more vibrant graphics, a better-looking UI and 3D buildings included. Searching for a venue, a food or cuisine you want to eat or a landmark is so much easier with the smarter search function.

Regular commutes to work, home or wherever else you go can be modified on the fly for you automatically if live traffic knows you’re heading straight into gridlock. Routes can also be compared to see if the shortcut TomTom suggests will actually save you time. This is cool in that your daily commute to work or home can vary by the day or week, depending on what’s happening on the road. Points of Interest (POIs) are thrown into the search as well, so that you can find a specific bank, gas station or supermarket, for example.

To illustrate the point about the PND market, TomTom said its own survey found 13 percent have in-dash nav solutions, and only nine percent use their mobile phone for navigation. Up to 39 percent still use portable nav units, leaving a huge market of people who either don’t have one, or feel they don’t need one. TomTom wants those consumers.

No pricing or spec list was released for any of the products, so it’s hard to say if this dual strategy will come with a premium to pay. The PNDs are expected to come to the U.S. in Q2, with the smartwatches to follow in the summer afterward. A few months after that, we’ll know if TomTom is on the right track in retooling its brand to go beyond just navigating drivers.

GameStop’s latest pivot takes it into the NFT business