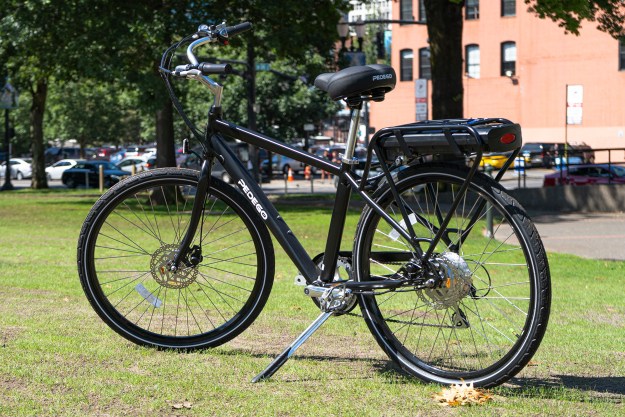 “The City Commuter Lite Edition is comfortable for both your butt and your wallet.”

I was probably doing 25 miles per hour when I locked eyes with the cop. Immediately, I tapped on the brakes and, after a short distance, casually looked over my shoulder to see if his Ford Explorer had leaped out of its parking space.

It hadn’t, of course. I was doing the speed limit, pedaling away on an electric bike that looked like any mundane cruiser. I wasn’t doing anything wrong. I just felt like I was.

That mischievous feeling constantly came back as I cruised around Portland on Pedego’s City Commuter Lite Edition. Not because I was out of line, and not even because the bike is that quick — it’s slow and heavy, even for an ebike. Yet my brain couldn’t gel the heft of the bike with the effortless cruise it can maintain. It made scooting around town simple and left more than a few fellow cyclists sweating through their bib shorts in a futile attempt to keep up.

The City Commuter Lite Edition, starting at $1,895, gets its name from its price and not weight. The classic 28-inch model I rode weighs 55.8 pounds. That’s high for an electric bike in this category; the Trek Verve+ is 45 pounds, and the Specialized Turbo Como weighs 46 pounds. You’ll have a hard time hefting the City Commuter Lite Edition up a set of stairs or even a tall curb. The battery, mounted below the rear rack, can be removed to slightly reduce weight and improve balance.

Its weight can be felt on the road. Lycra-clad cyclists worshiping at the temple of carbon will have a bad reaction to the City Commuter Lite Edition’s tepid, relaxed road manner. Telepathic steering? Hah. You ask the City Commuter Lite Edition to do something, and like a good friend baked on half a bowl of edible brownies, it’ll comply. Eventually. After it finishes the last season of Friends.

Of course, relaxation has perks. The bike doesn’t twitch or jerk when you turn the bars, but wafts in your intended direction. Bumps and potholes are noticeable, as the bike has no suspension, but the hefty frame and thick tires isolate most jolts. You’ll only find it ponderous if you purposely dive into a corner at high speed. Competitors from Specialized and Trek feel more responsive.

The bike doesn’t twitch or jerk when you turn the bars, but wafts in your intended direction.

This isn’t a sports coupe. It’s a truck – and I mean that as a compliment. Most Americans drive trucks or SUVs. Not because they need the cargo room, but because they like how a truck feels on the road. Trucks are big, comfortable, hefty machines. Their sheer mass is reassuring. The City Commuter Lite Edition provides similar pleasure, all without belching a ton of carbon every month.

Though it’s Pedego’s most basic City Commuter model, the Lite still has a 500-watt motor. There’s no pedal assist here. Just twist and go. On flat terrain, the bike glides to cruising speed in a few seconds. Keep the throttle open and you’ll eventually hit the top speed of 20 miles per hour.

Yes, that’s right. You don’t have to pedal. State laws generally require an ebike to move under pedal power but don’t demand the rider must pedal. It’s entirely possible to treat the City Commuter Lite like an electric moped, and I’d argue you’re better off for it. The bike’s hefty frame, upright position, and broad seat make pedaling a serious chore. I’m a daily bike commuter, riding 12 miles round-trip on a meat-powered bike most days, and even I found the City Commuter Lite challenging to push around on my own power.

Stick to the throttle, though, and the bike’s convivence is addicting. Want to meet friends for dinner after work? No problem. Just hop on and hit the throttle. You won’t need to a change of clothes since you’re not putting in real effort, and you can use bike lanes or sidewalks to bypass traffic (sidewalk use is legal in Oregon – check your state laws). The City Commuter Lite Edition is a fantastically quick way to navigate urban America during rush hour.

Yes, that’s right. You don’t have to pedal.

You can wander up to 45 miles, according to Pedego’s marketing materials. I’d say that’s a charitable claim. I ran the battery down to a quarter with two 12-mile trips, which meant I had to charge once every three days. Most riders will see between 30 to 40 miles on a charge. That’s a tad less than you might expect from a Specialized Turbo Como 2.0 or Trek Verve+ under similar conditions, and the City Commuter Lite Edition is more difficult to ride when out of juice because of its heavy frame. Charging the Lite’s battery from near-empty to full took about four hours.

The features are missing. But will you miss them?

The most expensive ebikes can be complex, and some even have smartphone apps. The City Commuter Lite Edition strips most of that out in the name of affordable, reliable transportation. Pedal assist? Not here. LCD screen with speed and range? Nope. It has a throttle, disc brakes, a rudimentary charge gauge, a taillight, and that’s about it.

Stripping out features does rob the bike of excitement. Sitting atop a $5,000+ Specialized Vado or Riese and Müller Charger feels like an event before you start moving. Pedego’s City Commuter Lite Edition is just a bike. It looks like a cruiser but, unlike most cruisers, it’s not available in exciting colors (at least, not in Lite Edition trim).

You can find more features on less expensive ebikes. The GenZe 200, which we reviewed last year, offered pedal assist and a basic LCD screen. Other options include the Sondors Thin and Propella 3.0., both of which are less expensive but have a few additional features. Those bikes are also a bit lighter.

The City Commuter Lite Edition has a more powerful motor, however. While many competitors have 250- or 350-watt motors, Pedego includes a 500-watt unit. The difference is noticeable from a standstill, and the bike can (eventually) haul itself up steep hills that affordable electric bikes usually can’t tackle without help from your quads.

It has a throttle, disc brakes, a rudimentary charge gauge, a taillight, and that’s about it.

You’ll also find a rear rack integrated into the frame. It’s a handy standard feature that’s rarely stock on competing ebikes. The rack’s thick tubing means certain pannier bags won’t fit, but that’s only a problem if you already own a pair.

Pedego has one feature that’s rare among electric bikes: a nationwide retail network. Pedego, which has operated for a decade and calls itself the biggest electric bike brand in America, operates over 100 stores across the United States and promises a two-year warranty. You’ll find Pedego stores not only in the usual coastal bike havens but also in Boise, Indianapolis, and Santa Fe. Only the largest bike brands, like Specialized and Trek, have similar reach.

Pedego’s City Commuter Lite is more electric moped than electric bike, and that statement alone should help you decide if you’re interested. Looking for an ebike that’s great for exercise or covering long distances? Skip it. Want an ebike you can zip across town without arriving sweaty and exhausted? The Pedego City Commuter Lite is for you.

You’ll find even less expensive bikes from affordable brands like Swagtron and Ecotric that can get you from point A to B, but they have less powerful motors and often skimp on disc brakes.

Major bike brands offer electric commuter bikes at similar but slightly higher prices. Trek’s Verve+ and Specialized’s Turbo Como 2.0 are good examples. They’ll appeal if you want a conventional city bike that’s fun to ride on your own power but can also offer a boost when needed.

The City Commuter Lite Edition’s heavy frame could last decades if maintained well, and all the components can be repaired or replaced. As with so many electronics, the battery will be your main obstacle to longevity. While replaceable, there’s no guarantee that a compatible battery will be widely available in 2029.

Pedego offers a two-year warranty and has a broad dealer network. The dealer network is great, but the warranty is so-so. Major bike brands offer tiered warranties that usually cover electric bike components for two years and cover the frame for life.

Yes. The Pedego City Commuter Lite Edition is a simple, affordable electric bike that can navigate dense cities at least as quickly as a car.