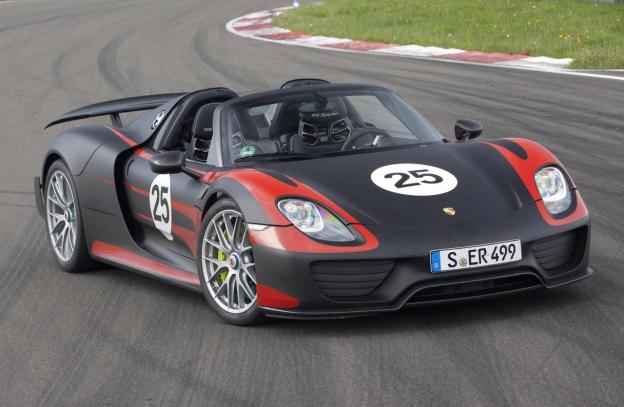 Porsche is upping the horsepower of its 918 Spyder plug-in hybrid supercar from 795 to 887, and it has some updated specifications to go with that increased output. Stutgartt is also revealing more about the 918’s programmable driving modes and other tech.

In addition to being powerful, the 918 Spyder will also be (relatively) lightweight. It’s official curb weight is 3,715 pounds; an optional Weissach package will trim it to 3,616 pounds. That means the 918 will probably be a little heavier than rivals like the Ferrari LaFerrari and McLaren P1, but neither of those cars have all-wheel drive.

918 drivers will also be able to choose how they want to deploy this power. There will be five driving modes: E-Power, Hybrid, Sport Hybrid, Race Hybrid, and Hot Lap.

In all-electric E-Power mode, the default setting, the 918 will cruise on battery power for up to 18 miles. Even without the V8, it will still do 0 to 62 mph in 7.0 seconds and reach a top speed of 93 mph. Not supercar stuff, but not bad for an EV, either.

The three hybrid modes balance fuel efficiency with power output in varying degrees, until the driver gets to Hot Lap mode. In this mode, speed is the only concern; the battery isn’t even charged.

Also helping the 918 Spyder achieve its mind-bending performance numbers is a suite of new technology.

In addition to all-wheel drive, the 918 will have a four-wheel steering system like the one Porsche just debuted on the 2014 911 Turbo. At low speeds, it steers the rear wheels opposite the fronts to tighten the turning radius. All wheels turn in the same direction at higher speeds to increase stability.

The Porsche supercar also has an active aerodynamic system with three modes. In Race mode, the most aggressive, extra spoilers and flaps deploy to better channel air around the car, increasing downforce.

Porsche may have made some last-minute changes to the 918, but one thing that hasn’t changed is the price. The world’s first production plug-in hybrid supercar will cost $845,000. Only 918 examples will be made, with deliveries beginning on September 18 (yes, 9/18), 2013.