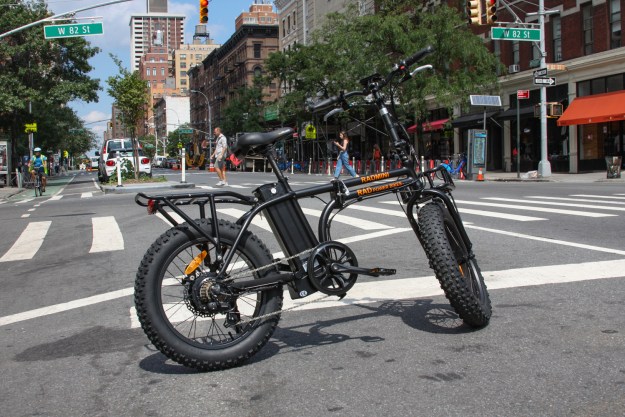 “It may be fat, but the RadMini is an agile and capable ebike you can bring along anywhere.”

Folding bicycles are nothing new, and you can now find ebikes being used by recreational riders, commuters, and delivery people in any major city. One significant problem of living and traveling in such an environment is lack of storage space. Folding bikes have helped mitigate the problem of storing your vehicle at work or at home, and ebikes can replace public transport, depending on traffic and the length of your commute.

Now, one company is combining these two useful designs into one. Rad Power Bikes’ RadMini electric folding fat bike sets out to do it all. For our RadMini folding ebike review, we took it around New York City, dodging traffic above ground and foot traffic below in the subways.

Our past experiences with electric bikes have usually left us with one common gripe: bulk. Ebikes are heavier than non-powered bicycles, which is an issue in places like, say, the overcrowded island of Manhattan. The advantages of a powered vehicle, however, make themselves clear when trying to get from point A to B in a busy city.

The RadMini’s name is deceiving when you take in the specs. The 20-inch fat tires are also four inches wide. Its 750W hub-mounted motor and 48V 11.6Ah lithium-ion battery provide power and endurance for long rides. It has a slightly shorter-than-average overall length of 64 inches. Despite its aluminum frame, fork, and rims, the RadMini weighs in at 60 pounds, including the battery and motor.

While a folding bike is easier to store and travel with, it can fall short in usability compared to a conventional bike. So how does the $1,499 RadMini measure up?

Ride it your way

Whether cruising through the bike paths or the busy streets of the city, the RadMini was solid and agile for a bike with this heft

Portability should not compromise rideability, and this is where the RadMini shows its strength. With easily adjustable seat and handlebar heights, as well as ergonomic handgrips, it’s a breeze to find the ideal riding position. The Velo Plush seat is one of the more comfortable saddles we’ve ever had the pleasure of sitting on, and the Wellgo forged aluminum pedals are super grippy.

The bike’s handlebar-mounted twist throttle can be used to coast along, but we discovered a party trick. Getting started on a 60-lb. bike, especially in the rough terrain the RadMini was designed to handle, is not easy. But if you give the throttle a little twist, you can use the momentum to pull ahead of traffic or simply get going. The throttle can be switched off, which prevents any accidental activation when you’re bearing down on the handlebars to tackle a bump or hill. The throttle is sensitive at the low end, so you have to be careful.

That being said, this is a pedal assist bike, and if you’re heavy on the throttle, you will eat into the battery life. There are five levels assist, which are activated from the control panel on the left handlebar. At lower levels, you can still get a good workout, adjusting power for varying levels and types of terrain. At level 5, the bike seemed to diminish to a fraction of its weight, and we had no problem maintaining speeds of 20 mph and above. The manufacturer places the range at 20-40 miles, again, depending how you ride.

At that velocity, slowing down and stopping is of utmost importance, and the RadMini’s mechanical disc brakes were up to the task. You can upgrade to hydraulics, but we found the stopping power to be more than adequate.

The 7-speed Shimano drivetrain with thumb shifter works well in conjunction with the pedal assist system. You can mix and match gears and levels of assist to adapt to nearly any riding environment, whether you want to go hill climbing, dune blasting, or simply speed along the pavement.

More than just a motor

When it comes to bells and whistles, the RadMini doesn’t skimp. The bike’s center-mounted LCD display includes a speedometer, Watt meter, and odometer. The screen also helps you keep track of the battery power and levels of assist. On top of that, the bike’s aluminum brake levers feature rubber inserts to increase grip, while an integrated bell on the left side helps you alert pedestrians before you zip by.

Portability should not compromise rideability, and this is where the RadMini shows its strength.

For night cruising, the RadMini boasts a powerful LED headlight powered by the bike’s main battery, while the independent LED taillight has its own battery source. This reduces the need for more wiring.

Whether flying down the bike paths or the busy streets of the city, the RadMini is agile for a bike with this heft.

Downshifting gears feels a bit clunky, but we had no problems with slipped chains or the like. There was enough power to conquer any hill, and keeping up with traffic was not a hard task.

Once you’ve run out of juice, it takes roughly four to five hours to charge the battery from empty. And thanks to a large capacity, you can safely charge your phone on the go via the bike’s built-in USB port. When you are done riding, you have to remember to switch off the taillight separately.

On-road, off-road, or in your closet

Being a fat bike, the RadMini can be taken off the pavement. We tried some off-road bike paths and it performed admirably well. Grass and sand traps did nothing to slow it down, and only the deepest car-destroying potholes were a worry in the urban jungle.

When your rent is determined by square-footage, you don’t want something like a bicycle taking up any more room than necessary. This is where the RadMini’s most unique feature comes into play: it can fold to about half its size.

A hinge on the main tubes allows the RadMini to fold horizontally. It is a simple process that was detailed in the assembly video that Rad pointed us to.

First, you fold the pedals in, then you unlock the hinge and lift the pin to fold the frame. Next, you unhook the stem from its locked position and fold the handlebars down. Use the included Velcro tie to strap the two halves of the frame together, and you’re good to go.

At this size, the RadMini can more easily be stored out of the way. It will fit in most reasonably-sized closets, but if you ride every day, you might want to keep it handy, since it’s not exactly easy to move around. There is a handle underneath the saddle, but it’s certainly not like carrying around a briefcase.

You can remove the battery to reduce the weight, and do the same for the heavy-duty front and rear racks. This is great if you are going on a trip, but not so ideal for a daily commute. You need tools to remove the racks, and you lose the taillight when you take off the rear rack.

All Rad Power Bikes are covered under a limited 1-year warranty. This includes the bicycle’s main components, such as the frame, wheels, LCD screen, derailleur, shifter, motor, throttle, wiring, lights, saddle, seat post, and other hardware. The battery is also covered for one year after your purchase.

The RadMini gives you the benefits of powered cycling along with the health benefits of going under your own power. With its fat tires and sturdy frame, it can feel at home in nearly any environment. The folding feature adds convenience to storage and travel, and best of all, it’s a blast to ride.

The Airhwheel R5 is a compact folding ebike. It’s smaller and lighter than the RadMini, and has a removable power source you can take with you to charge your devices. This bike sacrifices the capability of a more substantial vehicle for increased portability. The manufacturer claims a max range of about 60 miles and a top speed of about 12 mph. You can purchase a sample for $756.

Tern’s Vectron folding ebike features a Bosch motor that will propel the bike up to 20 mph. An 80-mile range tops out above the RadMini. The Vektron folds in a similar manner, but it can be wheeled around like luggage or even carried on your shoulder. Hydraulic disc brakes and a lighter 50-lb. weight give it some other advantages, though you will pay up at $3,400.

The VeeGo from Ride Scoozy, which starts shipping in late October / early November, and claims a similar range to the RadMini at 20-40 miles. It has 7 speeds and will propel you up to 20 mph. It weighs about the same as the RadMini and 5 levels of pedal assist with a throttle. Its step through frame makes it easy to mount, though these types of frames are typically less durable than a traditional diamond frame. It carries a starting price of $1,250.

The RadMini’s double-tube frame and sturdy construction assures that it will last. The derailleur cage protects its more sensitive components, and the battery and motor are tucked in enough that they shouldn’t take direct damage if you have a tumble. A fat bike is, by nature, designed to be ridden hard on and off the pavement, so your riding habits will determine how much abuse the bike will endure.

Rad states that the battery provides 800 full charge cycles before needing replacement, but it also recommends you don’t let the battery drain too much before recharging. So you should be able to surpass that number and not need a new battery for quite a while.

If you want to change the way you commute, the RadMini could be one solution. It will deal with whatever the street throws at you, and if you know of an off-road shortcut, it can handle that too. You can fold it and keep it out of the way when not in use, and in a pinch you could take it on public transport. It may not feature the premium components of some of the competition, but it does plenty to justify its $1,499 price.