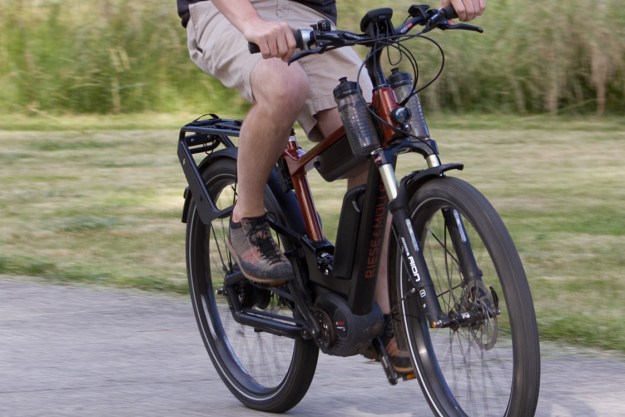 “The Delite nuvincie is a premium-priced ebike that packs a premium punch -- and we just couldn’t get enough.”

Range anxiety is a relatively new concept, especially in the world of e-bikes. While the dread of getting stranded is less dramatic as it is when it happens to electric cars, watching your range tick down mile by mile causes a bit of unnecessary malaise. Stepping in to ease your range worries is the German-based ebike manufacturer, Riese & Muller with its latest product, the Delite nuvinci. By doubling down on battery power, the Delite nuvinci gives riders the ultimate experience in e-bike range.

But is the extra battery (and the range that comes with it) worth the higher price tag? To get a true sense of how the Delite nuvinci handles in the wild, we snagged one for a few weeks and rode it like hell. At the end of our nearly 500 miles on the bike, we found that this premium-priced ebike packs a premium punch, and we just couldn’t get enough.

The Delite nuvinci is one of the many options Riese & Muller offer for its dual battery purposes, yet there’s so much more to it than dual batteries. Hailed by its creators as a “town and country” e-bike, the Delite nuvinci provides an upright and comfortable body position that’s as able at tackling potholes as it is rocky dirt roads. The all-purpose abilities of the Delite nuvinci are due to its full suspension with Suntour Aion air suspension fork and X-Fusion O2 air-sprung element rear shock, as well as the 27.5″ Schwalbe Almotion 55-584 tires.

Riese & Muller did a lot more than just equip the bike with quality suspension and reliable tires. Rather, it’s the healthy helping of included accessories which allow the Delite nuvinci to truly shine. As anyone who’s sifted through third-party add-ons can attest, going through the process of finding what fits and modifying a universal part is a hassle. Not only do accessories often fail to live up to their billing but it takes entirely too much time to take a stab at custom fitting them.

The healthy helping of included accessories allow the Delite nuvinci to truly shine.

So, Riese & Muller decided to do the updating for you as the bike comes standard with water bottles and holders, a kickstand, fenders, lighting, a luggage rack, and an Abus bike lock that’s keyed to match its lockable batteries. Put plainly, purchasing the Delite nuvinci gives you an e-bike that has everything you’d need for an extended trip — save for actual luggage and perhaps a phone holder like other e-bikes we’ve tested have had. Each included accessory is not simple throw-ins, either. This is gear you need.

Though these accessories aren’t exactly a dealbreaker, the fact they’re included — and thus make the bike void of any immediate, expensive upgrades — allows the steep price tag to make a bit more sense. Sure, $7,000 isn’t exactly pocket change but drastically reducing the process of hunting for, and installing, an add-on is a nice touch and something that shouldn’t be taken for granted.

Putting the power down

When it comes to heading out for your daily commute, or even an extended trip, options don’t mean much if power isn’t being put down. Rest assured, the Bosch Performance CX motor with its dual 36-volt Bosch PowerPack 500 Performance batteries give you all the range you need. In our experience on the Delite nuvinci, we consistently experienced a range of roughly 130 miles while in Eco mode. This lined up exactly with the estimates on the Bosch Range Calculator as well as the Bosch Intuvia display.

For the most part, our experience with the Bosch Performance CX motor was issue free, with our only complaint being that the pedal assist was a bit more abrupt than other models we’ve tested in the past. Similarly, the Intuvia display was more than adequate, giving us feedback on our current speed, range left in the battery, and trip distance while also indicating which mode we were in (Eco, Tour, Sport, Turbo).

The Delite nuvinci is the perfect entry into the world of ebikes — that is if you can afford it.

Like many ebikes on the market, each mode offers a slightly different pedal-assisted ride. Eco, the Delite nuvinci’s base mode, gives the bike a subtle amount of boost while each subsequent mode kicks it up a few noticeable notches. As expected, each mode’s impact on the battery increases as the power does, with Turbo sapping its juice at a rapid clip.

Say goodbye to the chain

Despite the bumpy pedal-assistance, the bike’s Gates belt drive helped smooth out the ride. Eschewing the laborious task of shifting gears, the Delite nuvinci uses a clockwork of pulleys and tensioners to take you from flat surfaces to hills with zero noise or issue.

Controlled via the grip on the handlebars, the bike’s belt drive bids farewell to the days of crossed up chains, instead leaning on a durable belt that’s both longer-lasting and free of greasy maintenance. Another high-quality addition which only further justifies its expensive barrier of entry.

The Delite nuvinci offers a ten-year warranty for the frame, five years for the rear swingarm, two years for Bosch’s electric motor, and a standard one-year manufacturer warranty on the remaining components.

The Delite nuvinci is the perfect entry into the world of ebikes — that is if you can afford it. Having professionals, like the folks at Riese & Muller, go through the process of picking the best parts and pieces saves you a ton of time and effort. However, the flip side is that convenience is expensive and at $6,759 for the base Delite nuvinci, words like budget don’t come to mind. Furthermore, considering that base price only includes a single battery — the second costs $823 extra — you start reaching the upper regions of ebike price points similar to Stromer’s ST2 S.

But, in our time with the Delite nuvinci, it proved itself greater than the sum of its parts. Having an extremely well-sorted bicycle that glides around effortlessly, despite its whopping 74-pound weight, is proof that you get what you pay for.

At present, no. The Delite nuvinci’s dual batteries and the plethora of accessories put it in a class all its own. Comparing it against bikes like eSpin’s Sport, Specialized’s Turbo Vado, or Trek’s Dual Sport+ allows you to match certain aspects, but none comprehensively match wits with Riese & Muller. With an innovative two-battery setup and an accessory-heavy standard build, the Delite nuvinci is in rare territory.

To say we did our best to beat this ebike up is a bit of an understatement. With a little over 470 miles, the Delite nuvinci held up quite well to the abuse we put it through. A drop here or there has done little to phase this beast of a machine. The components, including the Shimano Deore XT hydraulic disc brakes, continued to perform with zero issues.

Meanwhile, the batteries, which take roughly four and a half hours to charge, never created a memory for decreased life and are charged while still attached to the bike. With proper bike maintenance, we could see the Delite nuvinci lasting for several years, allowing anyone to easily get their money’s worth.

Yes. Even with a slightly elevated price point, what Riese & Muller have done is build a product the buyer doesn’t have to worry about equipping. Through careful curation, the Delite nuvinci is an ebike with all the right parts, creating a near perfect setup for town and country riding. For those able to afford it, we doubt you’d find something more worry-free and complete than the Delite nuvinci.