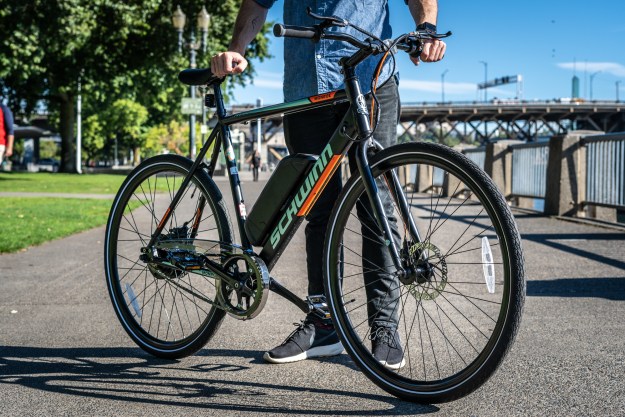 “Schwinn's Monroe 250 ebike cuts the right corners, making it as capable as it is affordable.”

I’m not a fan of electric bicycles.

As an avid bike commuter, I clock a healthy 2,000 miles on my Specialized Diverge in a any calendar year. It’s a nice bike — though, it’s certainly not Tour-caliber — and I’ve steadily grown accustomed to its jet-black frame and abundance of gears, which allow me to traverse the damp hills of Portland, Oregon with ease. The mere thought of ditching versatility for an electric single-speed seems unnecessary, if not ridiculous.

This article is part of our continuing series, <i>Tech for Change</i>
From 3D-printed prostheses to burgers grown in science labs to smarter mobility for the elderly or infirm, tech improves our lives every day in a million ways beyond simply making things more convenient. Tech can have a meaningful impact — that’s why we call it Tech for Change. Here are the companies and people fighting to make a difference.

The thing is, the Schwinn Monroe 250 (I reviewed the disc model with an MSRP of $1,35) is a hard bike to hate. It sits at the cross-section of functionality and affordability. It cuts corners, but mostly the right ones, and hits the marks that matter most in range and maneuverability. Like the Swagtron EB12, it’s aimed at box-store dominance. Yet several key features help it stand out.

The Monroe 250 isn’t the iconic Schwinn Corvette your grandfather continues to wax poetic about over Thanksgiving dinner. Unlike the aforementioned three-speed of ‘55, the Monroe is one of several similar models built to capitalize on the burgeoning ebike market in the United States.

The Monroe 250 isn’t the iconic Schwinn Corvette your grandfather continues to wax poetic about over Thanksgiving dinner.

Contours and colors are no longer the selling point here. Instead, the Monroe’s legacy rides on a 250-watt motor attached to the rear hub which, in conjunction with a single-speed drivetrain, allows the bike to reach a top speed 20 miles per hour. That is standard fare at this point — the like-minded Propella 3.0 and Pedego City Commuter Lite Edition both achieve similar speeds — but it’s plenty fast for your everyday cyclist. Leisurely cruising by at 20 mph is enough to make even the most seasoned commuters feel sluggish.

Though it lacks gears, the Monroe features five levels of pedal-assist, each of which supplies you with a little more oomph when you need it most. The mere act of pedaling activates the motor, and it’s subtle enough to not be jarring. Once moving, the bike tracks and turns well, making everyday commutes on flat pavement a breeze. Like the Swagtron EB12 and Propella 3.0, the Schwinn Monroe 250 benefits from its simple frame. It feels much like an average mid-range bicycle.

Thanks to a pair of 32c tires and disc brakes, it can even handle the kind of light trails you might find in a city park or suburb, despite Schwinn billing it exclusively as an “urban ebike.” You wouldn’t want to take it on your local singletrack, but hey, it can handle the occasional bump in the road or bout of bad weather. Larger and more expensive bikes like the Specialized Como will offer better comfort at any given speed, however, thanks to larger tires.

Engaging pedal-assist is easy. A simple, three-button LED display located on the left handlebar allows you to adjust the amount of assistance though, unfortunately, it offers little in the way of metrics. Five LED lights showcase the current level, while another five indicate the remaining battery life. No speedometer. No odometer. No frills.

Not that I’d mind a frill or two. Competitors to the Schwinn Monroe 250 sometimes include small black-and-white LCD displays that offer basic information. They’re not beautiful, but they’re better than nothing, which is what you get with the Monroe 250.

You wouldn’t want to take it on your local singletrack, but it can handle a bump in the road or bout of bad weather.

Schwinn makes good on its claim that the Monroe can venture 45 miles on a single charge, at least under ideal circumstances. Terrain, temperature, and the level of pedal-assist all have an impact on performance, but 45 miles is feasible, and places the Monroe in the upper echelon for this price point. Bikes like the Specialized Como 4.0 can go travel further on a single charge — up to 60 miles, in some instances — but cost significantly more. The Monroe offers ample distance at a fraction of the price.

Low cost, at a cost

Schwinn has never been a company associated with high-end components. From the get-go, it was concerned with mass appeal, opting for big-box consumption over the independent bike stores scattered across the country. In the ‘90s, Schwinn bikes appeared in select Target and Walmart stores. In the aughts? Amazon and Dick’s Sporting Goods.

As part of its push for the mainstream market, Schwinn has made an effort to keep costs low. The Monroe originally retailed for $1,350 on Amazon, but can now be found for as low as $900 in select stores (note that there are several models, and some don’t have the disc brakes on my review bike). Cost has long been a barrier for entry when it comes to ebikes, but reduced costs often lead to quality concerns, which is the case with the Monroe, Swagtron EB12, and many bikes within this price bracket.

The aluminum, three-tone build won’t win any awards, but it’s serviceable and nondescript, with flat handlebars and a fixie-style frame that feels both slick and solid. It’s not a real looker, because the electronic components aren’t integrated into the design or frame and most cord runs are external.

The aluminum, three-tone build won’t win any awards, but it’s serviceable and nondescript.

Other components don’t feel as forgiving as the frame. The platform pedals seem brittle, as if they might break if they were to make contact with anything other than your feet, and the “comfort-ribbed” BMX grips, ironically, provide little in the way of comfort. In fact, neither does the road-style saddle, which isn’t much of a respite on longer rides. You’ll want to budget $50 for a saddle upgrade if you buy the Monroe.

My most serious problem was a quality control issue. The stem that shipped with my Schwinn Monroe 250 review bike wasn’t built to the correct specifications. It was slightly too large, which meant the handlebars moved free of the wheel even with all screws fully tightened. This wasn’t revealed until a Digital Trends staffer took the bike to a shop to find out what was wrong. Schwinn quickly shipped a properly manufactured stem, which fixed the problem.

The Schwinn Monroe is the definition of bang for your buck. It’s not the most high-tech ebike on the market, but it still offers ample range and ferries you from point A to point B without breaking a sweat. Despite lackluster hardware, it remains a suitable contender for those looking to expedite their commute without taking out a second loan on their mortgage.

One important note. I reviewed the disc model, which is no longer available new. Only the rim-brake models are available. They’re much less expensive, as low as $900 at Wal-Mart, and that dramatically sweetens the deal. Just remember that rim brakes aren’t the best in rain.

Manufacturers such as Nakto and Ancheer offer more affordable alternatives that often dip below $650 on Amazon, but their offerings are significantly heavier, lack range, and don’t come with a long-term warranty. Swagtron’s EB12 is even less expensive, and has more features, though its overall build quality is even more, ahem, ‘budget friendly.’

The Propella 3.0 is currently our favorite budget electric bike, and the Schwinn Monroe 250 can’t top it. Though the two bikes offer similar performance and specifications, the Propella 3.0 has a more eye-catching design and feels more robust.

If you need additional recommendations, our guide to the best electric bikes has you covered.

I have concerns regarding the pedals and other minor components, including the stem, but they can be swapped out without much issue. Schwinn offers a lifetime warranty on both the frame and fork. The battery also comes with a 2-year warranty, which is double what most manufacturers offer.

On the plus side, the Monroe 250 isn’t a complex piece of hardware, nor is it one that’s reliant on future software updates. With a little upkeep and some small additions (think: fenders), it should easily last an upwards of 10 years. It will be easier, and less expensive, to fix than electric bikes with more complex, high-end components.

Yes. The Schwinn Monroe 250 makes compromises, but it’s affordable, capable, and should be easy to maintain.