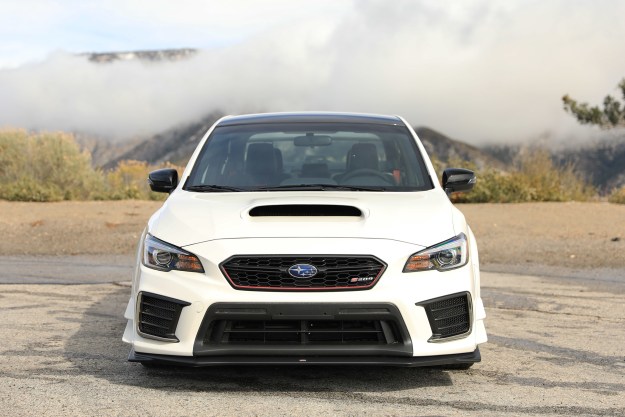 “The S209 justifies its price tag for Subaru super-fans.”

Subaru has a well-documented history of playing alphabet soup with hot-rodded cars. From the Impreza 22B to the BRZ tS, these special-edition machines have ranged from legitimate road-legal legends to glorified trim packages, and that’s led to ambiguity over the years. But for those in the know, STI, which stands for Subaru Tecnica International, the company’s performance-focused subbrand, is an acronym that’s synonymous with greatness.

We’ve had our fair share of seat time in the fifth-generation Impreza-based WRX STI, a car that, while a bit unrefined relative to some members of its competitive set, offers plenty of charm. But there’s another offering from STI, one U.S. drivers might not know of. For the past 20 years or so, Subaru Tecnica International has cranked out a series of limited production S-line models that take STI performance to another level. All were exclusive to Japan.

But with the S209, STI’s latest S-line creation, Subaru decided to change up the program. Just 209 examples of the automaker’s latest hopped-up WRX STI will be produced, and they’re all headed to the United States.

Each one comes with a laundry list of upgrades over the garden-variety STI, along with a hefty MSRP of $63,995. That kind of coin takes the STI out of its original competitive set occupied by cars like the Ford Focus RS and Honda Civic Type R, and places it alongside the likes of the Ford Mustang Shelby GT350 and BMW M2 Competition.

Does the S209 have the hardware to back up its price tag?

Although Subaru performance is often associated with stage rally competition, S-line cars are more focused on road course prowess. And to that end, this car’s track intentions are obvious at first glance, from the flared fenders, to the canards and unique rear wing. It’s clear the S209 has quick track times in mind. However, its extroverted aero is only the tip of the iceberg.

Under the hood is the most powerful iteration of Subaru’s EJ25 2.5-liter boxer engine we’ve yet seen in a production car. It sports a new intake and air filter design for improved engine breathing, bigger fuel injectors, and a larger turbocharger that’s capable of delivering a maximum boost pressure of 18.9 psi.

There’s a trick intercooler water spray system on hand as well. It works like an overboost function. Steering wheel-mounted paddles let you call upon the system at will to inject mists of water on the intercooler. That briefly lowers temperatures for short bursts of extra power.

Exhaling through a unique low-restriction exhaust system, the combination is good for 341 horsepower and 330 pound-feet of torque, up to 31hp and 40 lb.-ft. from the standard STI. Paired with a close-ratio six-speed manual gearbox, the all-wheel-drive Sube is said to be capable of sub-5-second sprints to 60 mph from rest, on its way to a top speed of 162 miles per hour.

Sharper looks and more grunt are always welcome, but it’s the suspension and chassis tweaks that really set the S209 apart from its STI-badged brethren. Specially tuned Bilstein dampers are matched up with 10mm lowering springs, a 20mm rear stabilizer bar, and pillow-type bushings for the front/rear lateral links to improve body control. A two-piece strut tower bar and flexible front/rear draw stiffeners stiffen the body of the car to maximize tire grip, improve cornering stability, and sharpen steering response.

Speaking of tire grip, there’s quite a bit of it. That’s due not only to the handling upgrades, but also the 265mm-wide Dunlop SP Sport Maxx GT600A summer tires the S209 rolls on, which wrap unique 19×9-inch BBS wheels. Stopping power is provided by the same Brembo hardware you’d find on a standard STI, but a new high-friction pad material replaces the standard pads to improve fade resistance.

Inside, it’s mostly business as usual, though the Alcantara-wrapped steering wheel, S209 badging, silver contrast stitching, and a serialized plaque in front of the shifter help differentiate this S-line car from other models. Subaru’s 7.0-inch Multimedia Plus infotainment is standard and the only system on offer in the S209, which means navigation and the Harman Kardon sound system aren’t available. Fortunately, the touchscreen system supports Apple CarPlay and Android Auto, so Google Maps, Waze, and other supported apps are on hand to pick up the slack.

The standard STI has earned a reputation as a pretty stiff ride, and considering the track focus of the STI S209, we expected this machine to exhibit even less compliance around town.

Imagine our surprise when the S209 proved not only well-mannered in LA’s urban sprawl, but arguably more comfortable than a typical STI. The light, communicative clutch and Recaro sport seats made the car’s sporting intentions clear, but did so with minimal impact on daily drivability. We wouldn’t mind a bit more thigh bolstering to keep front occupants firmly planted in the seats when the going gets fun, though.

Speaking of which, it should come as no surprise that the San Gabriel Mountains’ technical switchbacks highlighted the S209’s greatest strengths. The additional power under the hood – even when we yanked the intercooler paddles in hopes of some kind of video game-like surge of power – isn’t transformative, but the suspension and chassis tweaks are.

The Dunlops offer stunning grip, and they’re mated to a chassis that is both eager to change direction and quick to forgive less-than-perfect inputs, making the S209 the kind of car that encourages confidence as you become more familiar with its limits.

Like all WRX-based models, the Subaru’s overall refinement pales in comparison to cars like the Volkswagen Golf R, but watching the VW quickly fade away in the rearview mirror on a good road will be a source of comfort for S209 owners.

Considering its price tag, the fact that only 209 vehicles will be built, and the lack of available options, the S209 is ultimately a model that’s aimed at collectors rather than enthusiasts. That’s a bit of a shame, because the upgrades found throughout the car serve to tangibly elevate its capability with virtually no compromise to its drivability.

This is the most capable WRX STI to ever roll out of a Subaru factory, but its price tag puts it in league with cars that will likely outclass it on a number of fronts. However, if Subaru were to apply these suspension and chassis modifications to a garden-variety STI at a more accessible price point, they’d have a potential game-changer in the segment.

How DT Would Configure This Car

Should You Get One?

Most people, even enthusiasts, will want to look at more capable cars in this price range. However, if you have the means and you’re a Subaru fan, this car is a real treat.
Home Restart