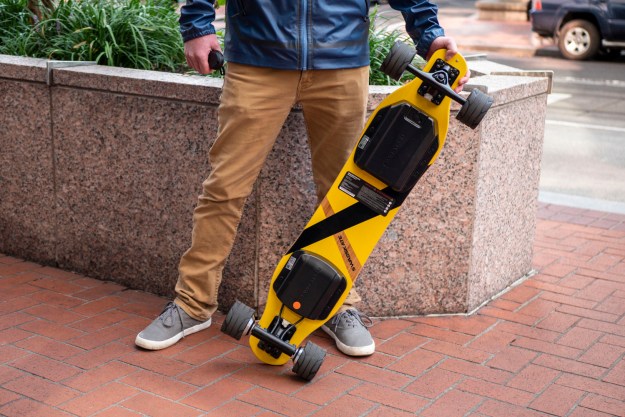 I used to avoid Swagtron skateboards like the plague. Why? Mostly because I despise the name, and up until recently, the company insisted on emblazoning it on every skateboard it produced. But lately, in addition to toning down the cringeworthy branding, the company has beefed up the quality of its skateboards. They can’t be ignored.

Case in point? The Swagtron NG-2 longboard. Despite the fact it’s outfitted with impressive specs, it’ll only set you back a meager 400 bucks, just a fraction of what most high-end boards cost.

I set my biases aside for a few weeks to test it out, and I was pleasantly surprised with the NG-2’s performance.

The specs put the Swagtron NG-2 on the right path from the start. For just $400, it offers impressive features like hub motors (instead of belt-driven, which don’t roll easily), a battery indicator built directly into the deck, and hands-free speed control.

This hands-free control, which Swagtron calls “an intuitive AI-powered somatosensory navigation system,” is the standout feature of the board. It lets you change your speed by leaning forward or backward — no controller required. Other boards with this feature cost upwards of $1,000, so the fact that Swagtron has included hands-free technology on a $400 longboard is a big deal.

From there, the specs are a bit bland, but not bad. The motors are 450 watts each, enough to boost you around flat surfaces at a speedy 18 miles per hour. That’s just on par with the competition. The Swagtron BG-2’s batteries will only net you about 11 miles on a single charge (give or take, depending on your weight), which is a bit on the low side.

However, specs alone don’t tell the whole tale, so I took this budget-friendly board for a whip around town.

I rode a few miles in the standard mode with controller-based acceleration. The first thing I noticed was that despite being totally belt-free (hooray hub motors!), this board doesn’t coast worth a damn. Big disappointment.

The wheels feel like they’re stuck in a puddle of molasses, so giving the board a couple kicks to get yourself rolling won’t get you rolling at all. It’ll just throw you off balance and make you look like an idiot.

I quickly learned that the only way to ride this board is to abandon the old ways and fully commit to the electric skate lifestyle. Don’t ever set foot on the ground. The secret to success is to just hop on the deck, mash on the accelerator, and let the electronics do all the work for you.

Which they will. The Swagtron NG2 has a fantastic “beginner mode.” It protects you from accelerating too quickly and flinging yourself into traffic. Most electric skateboards have a touchy throttle, so if you push just a little too hard on the accelerator, the board bucks out from underneath you faster than your muscles can adjust.

That doesn’t happen on the Swagtron NG2. Thanks to its intelligently tuned acceleration settings, you can slam the controller to full throttle and it’ll gradually take you up to full speed which, in beginner mode, is just 11 miles per hour.

However, this gradual acceleration system is missing from the Advanced mode. You’ll need to be gentle with the throttle if you ride the board at those settings, because even a small movement on the accelerator will result in a powerful and immediate burst of speed.

All things considered, the acceleration, braking, and general ride feel of this board are middle-of-the-pack, but leaning more toward premium competitors. It doesn’t have the supremely smooth feel you’ll get with higher-end boards from Boosted or Inboard, but considering the NG2 is just $400, it’s nothing to scoff at.

Hands-free? Not for me

After getting a feel for the NG2’s traditional modes, I decided to test out the board’s flagship feature. Hands-free speed control.

According to Swagtron, you can “simply lean forward on the front sensors to move forward and accelerate.” The sensors will also slow you when you lean back. It sounds awesome, but there are a few problems.

Activating this mode is a confusing process. Swagtron ended up sending us two review units because we thought our first one was defective. As it turns out, it wasn’t defective at all. The activation system is just finicky and won’t work if you don’t put your feet in the right place. You also have to step onto the board in a specific sequence, and if you don’t, hands-free mode won’t activate. Frustratingly, none of this information was in the user manual.

On top of that, the “near-zero lag” promise doesn’t hold up. I absolutely noticed lag between input and output. It’s not huge, but it’s there. The board takes a moment to register your weight shifts and translate them into acceleration or deceleration, so the speed control feels mushy and imprecise compared to what the handheld controller provides.

The sensitivity of the hands-free controls varies depending on the spacing of your stance and the placement of your feet. This isn’t a huge problem if you keep your feet bolted in the same place while you ride, but if you dance around the deck the slightest bit, the control sensitivity will change, and you’ll have to adjust accordingly.

I wouldn’t use the NG-2’s hands-free mode while skating on a busy street or sidewalk. It’s simply not as immediate and responsive as I’d like it to be. However, this mode is fabulous for leisurely cruises in low-traffic areas and pathways, where quick throttle and braking response aren’t as crucial.

It could save your commute, and maybe the planet

The Swagtron NG-2 is fun on a budget, but there’s more to it than a good time. It’s also a great way to conquer a short commute.

While its top speed of 18 miles per hour isn’t blazing, that’s lightspeed compared to the average speed of traffic in downtown Manhattan or San Francisco during rush hour. And unlike car, which burns gas and takes up expensive parking space, the Swagtron NG-2 doesn’t release emissions aside from the minimal amount associated with the power needed to charge it. Which isn’t much.

Since it’s a large board, the Swagtron NG-2 is best suited for longer commutes, where the stability granted by its size will leave you feeling more relaxed. You could even leave it in the speed-limited “beginner mode” if you don’t want to stress.

Shorter boards are a better choice if you want an electric skateboard to bring a mile between bus stops, or just need to cruise ten blocks downtown.

While the NG-2 certainly isn’t the best electric skateboard I’ve ever ridden, it’s unquestionably the best one I’ve ridden that costs 400 dollars. I can’t speak to it’s longevity or long-term durability, but from a features standpoint, the NG-2 offers too much bang-for-your-buck to ignore.

Only if you’re willing to spend more money.

Boards from companies like InBoard and Boosted offer better design, improved performance and, in many cases, better range. These boards are much more expensive, however. They’re less approachable for beginners because buying one feels like a hefty investment.

Want more options? Check out our favorite electric skateboards of 2019.

The Swagtron NG-2 seems durable, so it should last at least a few years. The most serious pain point will be the battery, as the board’s 11-mile range is already on the short side. Battery degradation will eat into that already low figure.

Yes. Even with it’s lackluster range and finicky hands-free controls, the impressively low price makes it a great choice for budget-minded buyers, first time e-board purchasers, or more seasoned riders looking for a knock-around board that you can thrash without feeling guilty.

The pros and cons of electric vehicles