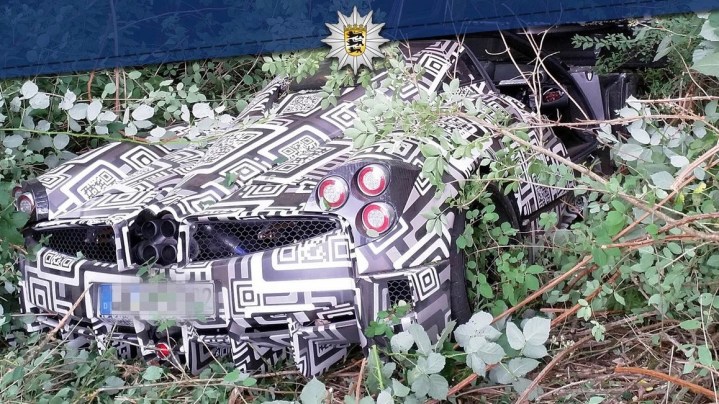 When automakers bring out prototype cars to test on public roads, they try as hard as possible to make sure those cars don’t get noticed. This test drive of a prototype Pagani Huayra Roadster did not go as planned.

The Aalen police headquarters in Baden-Württemberg, Germany, posted a photo on Twitter on Friday, June 22, showing the car in a rather compromised position. German newspaper Stuttgarter Nachrichten reported that a 37-year-old test driver crashed the car that morning. The driver apparently lost control of the car while accelerating, according to an English translation of the police tweet and newspaper report (via Jalopnik).

“When driving off the accelerator of the sports car was apparently so strong that the driver lost control and drove down a slope by car, where he crashed into a tree,” according to the translated newspaper report.

The crashed car wore the black-and-white camouflage typically used in the auto industry to hide the shape of prototype vehicles. Pagani confirmed to Road & Track that the car was “an evolution of the Huayra Roadster.” The convertible Roadster packs a 6.0-liter twin-turbocharged V12 sourced from Mercedes-AMG, good for 754 horsepower and 738 pound-feet of torque (the crash occurred near AMG’s hometown of Affalterbach). The supercar’s sticker price is somewhere north of $2 million. Alternatively, you can lease one for $25,000 per month with a $700,000 down payment.

The Roadster is one of three main Huayra variants, alongside the coupe and the Huayra BC, a more hardcore model packing 789 hp. But Pagani is always developing special-edition and one-off versions of its supercars, and it’s likely the crashed Huayra Roadster was a prototype for one of those. Pagani produces so few cars and introduces so many special editions that most cars leaving its Italian factory are customized or upgraded to some extent. However, Pagani didn’t provide any details on the car to Road & Track.

The automaker only said the car was crashed by one of its “German partners,” and that “neither the driver, nor the passenger reported any damages, both were unharmed, since the central monocoque [chassis] has performed exceptionally as planned!”

That is one way to put a positive spin on things.