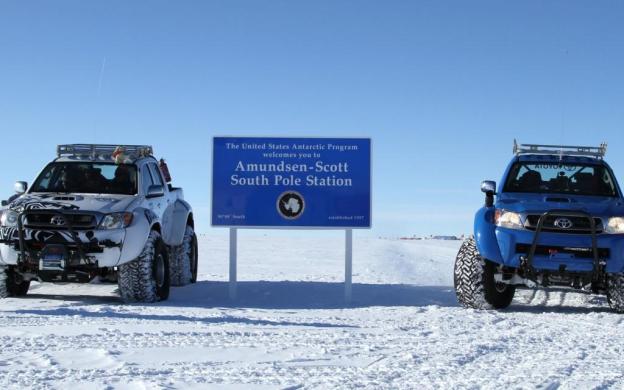 How do you get a Toyota truck across Antarctica? Add jet fuel. Extreme World Racing recently took a group of heavily modified Toyota Hilux pickups around Earth’s most southern continent. Driving over 5,900 miles, they set a record for the longest polar expedition in history.

To cope with the cold weather, the trucks’ 3.0-liter diesel engines burned jet fuel. Even with the more potent fuel, builder Arctic Trucks said fuel consumption can vary greatly between the coastal regions and the high plateau of Antarctica.

To take on Antarctica, the Toyota trucks needed more than jet fuel. One of the most important modifications was a new set of massive tires, with a 17 times that of a stock tire. This necessitated equally massive fender flares, as well as moving the front axle forward so the wheels could clear the front doors. During the expedition, the tires were also run at extremely low pressure to increase their footprint even further. A large footprint is crucial for getting traction on snow and ice.

The suspension and drivetrain were also reinforced for their fight against the elements. Suspension pieces needed to take the abuse of 5900 miles of roadless driving, and oil sump guards were needed to prevents rocks and ice from piercing the bottoms of engines. The Arctic Trucks Hiluxes were rated to carry 1.3 tons of supplies, some of which were dispersed at a fuel depot and weather station set up for scientists and participants in a ski race. Two of the trucks were 6x6s, with extra rear axles.

This is not the first time a Hilux has gone to the South Pole, or the North Pole. Arctic Trucks vehicles traversed Antarctica in 2008, 2009, and 2010. An Arctic Trucks Hilux starred in Top Gear’s North Pole Special, where hosts Jeremy Clarkson and James May became the first people to drive to the North Pole. May used another Hilux to explore the Eyjafjallajökull (Iceland) volcano when it erupted in 2010, bringing back a chunk of solidified lava as a trophy.

The Hilux was the perfect truck to take to Antarctica. Roughly the size of a Toyota Tacoma, it is known the world over as an indestructible workhorse. It is very popular with the Taliban, and became iconic for its role in the Libyan revolution that toppled Muammar Qaddafi. Clearly, this Hilux is built for extreme situations.

Toyota will use racing tech to build a road-going hypercar