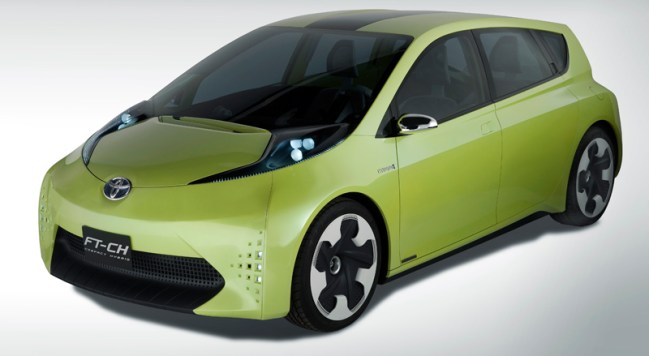 Whenever a new hybrid vehicle is introduced, it is invariably compared to Toyota’s hugely successful Prius. The Prius, which is currently its third generation, has been a big sales hit for Toyota and has put the Japanese auto giant at the forefront of the “green” auto movement.

Now that Toyota has the Prius, Camry Hybrid, and Highlander Hybrid under its belt (along with a few hybrids from its upscale Lexus division), the company is looking to put its hybrid system into a vehicle smaller than the Prius. Toyota plans to tackle the compact sector with the FT-CH concept.

The Prius, which is classified as a midsize vehicle, is 22 inches longer than Toyota’s new FT-CH. Not many details are available on the new hybrid other than the fact that it will be priced below the Prius. It’s more than likely that this concept will make it to production, but Toyota is keeping mum for now.

“A century after the invention of the automobile, we must re-invent it with powertrains that significantly reduce or eliminate the use of conventional petroleum fuels,” said Toyota Motor Sales President Jim Lentz. “One of many alternatives is through what is commonly called the electrification of the automobile. By far, the single most successful example of this has been the gas-electric hybrid.”

Another new hybrid making news today is the Honda CR-Z hybrid. The vehicle has already been profiled numerous times on DailyTech, but Honda today is revealing production specifications for the vehicle. The nearly 2,700-pound vehicle makes use of a 122 hp / 128 lb-ft gasoline engine paired with Honda’s Integrated Motor Assist (IMA) hybrid system. The vehicle will be rated at 31/37 mpg with a manual transmission and 36/38 mpg with an continuously variable transmission (CVT).

It’s admirable that Honda wants to appeal to enthusiasts with a 6-speed manual on the CR-Z, but it’s a crying shame that choosing to row your own gears results in such a dramatic cut to city mileage.

According to Edmunds Inside Line, the CR-Z will go on sale this August.