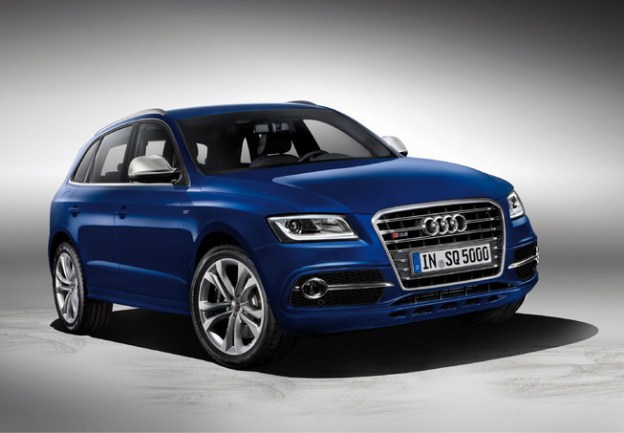 Audi unveiled the SQ5, a performance version of its Q5 crossover with a 3.0-liter TDI diesel, at the 24 Hours of Le Mans endurance race in June, but the company’s plans have changed. Despite a recently announced blitz of TDI diesel models in the U.S., Audi will equip the SQ5 with a gasoline engine for the American and Chinese markets.

Audi isn’t saying why it made the change; the only reason we know about the gasoline SQ5 is because a parts catalog was leaked. What we do know is that, whatever is under the hood, the SQ5 will be the first crossover to wear Audi’s “S” performance badge.

As with the SQ5 TDI, the new version’s engine displaces 3.0 liters. However, it comes from Audi’s TFSI line, and has one supercharger instead of two turbochargers. From the specs, this looks like the same engine Audi puts in its A6 midsize luxury sedan.

The only available transmission will be a seven-speed dual-clutch automated manual, which will send power to all four wheels through Audi’s quattro all-wheel drive system. Top speed is electronically limited to 155 mph.

If Audi really does sell the SQ5 in the U.S., it will reportedly import the petrol powered model only. That seems like a safe bet on the company’s part: Americans have not given diesel the widespread acceptance it has in Europe, and the SQ5 is already an unusual proposition.

Most performance crossovers are based on larger chassis and use raw power to overcome the laws of physics. The Porsche Cayenne, BMW X5 M, and Mercedes-Benz ML63 AMG defy their SUV bulk with mind-bending performance numbers.

The SQ5 will have plenty of power (the most powerful stock Q5 only has 270 hp), but it won’t be as bombastic as those larger crossovers. With its smaller packaging, the SQ5 will be more about finesse and balance.

It will be interesting to see whether this new crossover permutation grows into a new market segment, or whether Audi customers ask for more S4s instead.

Audi has not announced a release date for the SQ5 but, with the Los Angeles and Detroit auto shows coming up, the company has a couple of good opportunities to showcase a new addition to its U.S. lineup.