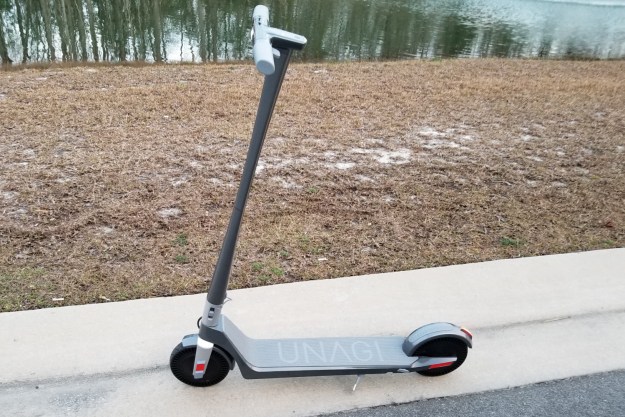 “Meticulously engineered, the Unagi is a scooter that makes a statement.”

There are plenty of competent e-scooters from companies such as Bird, Xiaomi, and Razor at half the price or less than Unagi Model One E500. No other models, however, combine the Unagi‘s refined design, build quality, and rider features. When you sell a personal transportation device for just under $1,000 against a strong line-up of competitors that go out the door for $350 to $500, you’d better deliver on all counts and over-deliver where it matters. And that’s exactly what Unagi does with the Model One.

Unagi sells the Model One E500 with dual 250-watt 16-Newton-meter electric motors, one on each wheel, for $990. The Model One E250 has a single motor on the front wheel and costs $840. In my view, if you’re already paying a premium price for the Model One’s design and build quality, the extra $150 is worth the price for the extra torque. Unagi rates the E250 to handle 6-degree grades, but the E500 can handle 15-degree hills.

I tested a gray Unagi Model One E500. The E250 and E500 are also available in Matte Black, Scarlet Fire, Cosmic Blue, or Sea Salt, a very light gray. If you want even greater customization, Unagi sells the Model One E500 dual-motor version for $1,290 with many premium custom finish options. The company will also work with you if you want to use your own design for your scooter finish.

The Model One’s handle folds with a clever one-finger release and locks in position for easy carrying. The E500 weighs just 26.5 pounds, which adds to its attractiveness for urban commuting, especially if you have to deal with stairways.

Spec sheets for many e-scooters read pretty much the same, but the Model One stands out. Carefully selected component materials, intuitive operating controls, and cleverly designed unique features make the Unagi special. From its magnesium alloy handlebar to custom-designed solid rubber tires with integral air-suspension, every part of the Model One is a bragging point. Even the unique peek-a-boo kickstand, usually an awkward add-on if present at all, is a clever functional detail. Disguised as a perfectly functional mid-range electric scooter, the Unagi Model One is micromobility art.

But the Model One does not emphasize form over function. Every design and component decision improves this e-scooter’s strength, boosts performance, or improves the user experience.

Let’s start at the bottom. The Model One’s deck is a single piece of machined aluminum for light weight with no compromise in rigidity, and covered with embedded silicon for traction.

The Unagi’s custom-designed 7.5-inch solid rubber wheels can’t go flat, because you don’t fill these tires with air. Instead, thin cutouts in the wheel deform when you roll over obstacles, smoothing out the ride just like a conventional tire.

Bowing to both technology and tradition, the Model One has two braking systems. Both wheels have electronic anti-lock brakes with variable force controls. Traditionalists can activate a friction brake on the rear wheel by stepping a heel on the rear fender.

Every part of the Model One is a bragging point.

The E500’s 250-watt front and rear wheel motors combine for 500 watts operation with a 1,000-watt peak. They also deliver plenty of torque for typical flat urban streets. The motors’ neodymium magnets are protected from overheating with a continuous monitoring system. There are three operational modes: Eco, recommended for novices, limits the top speed to 9-to-11 miles per hour; Standard ups the max to 11-to-13 mph; and Pro lets you take the Model One to its rated 15-to 17 mph top end. Single and dual motor Model One versions have the same top speed, but the doubled torque with the E500 gets you there faster and handles inclines better. Those speeds work well for urban commuting, though you might want a faster top end if you’re riding in suburbs or rural areas. You may notice the 20 mph maximum speed rating on the Unagi website — there is a rumored handlebar button code that removes the speed governor. I left it stock, and hit up to 16 mph maximum during my test rides.

As with all e-scooters and e-bikes, the Unagi’s top speed will vary due to many factors, including incline, temperature, and rider weight. While typical e-scooters state 225-pound weight limits for rider and cargo, the Model One can carry up to 275 pounds, a tribute to the e-scooter’s deck strength and motor torque.

A 9,000mAh lithium-ion battery delivers on the stated range of 15.5 miles per charge, which varies mostly by speed, incline, and rider weight.  Again, it’s sufficient for typical urban use, and at 26.5 pounds, the Unagi is light enough to lug into a building and recharge during the workday — it only takes four to five hours.

Exotic materials help keep that weight down; Unagi claims the TORAY carbon fiber used in the Unagi’s lightweight tube is the same used to build Elon Musk’s Space-X rockets, and the handlebars are made of magnesium alloy. When it’s time to fold it up, the patented single-button folding mechanism works smoothly and holds securely.

The handlebar holds the scooter’s throttle and brakes, horn, light control, and the drive and mode control buttons.

In addition to side reflectors on both wheels, the Model One has a 47-lumen LED front light and a rear red LED. In the photos above, you can see the Unagi Model One E500’s front and rear LEDs very early one morning on my street, for comparison, parked between a Juiced Bikes Scorpion and a Super 73 S1.

Unlike some of the fat-tire e-bikes I’ve tested, I wasn’t interested in taking the Unagi off-road or on the beaches where we live in North Carolina. Instead, I sought experience riding around town and in our neighborhood to see how the E500 measured up as convenient city transportation.

You can choose to drive the E500 with only one motor or with both motors engaged, which delivers an extra dose of torque, that twisty power that scoots you up to speed and up hills. Battery range and top speed are the same regardless of the selected drive configuration, so there’s not much incentive to cruise at half power.

Eco mode is a nice option for beginners to stay under 11 mph, but I quickly became addicted to the pull of Pro mode. With both motors in play, you need to be ready for this machine to take off. It’s also a mini wake-up-call the first couple of times.

The Unagi Model One is a classy ride with elegant looks and design features.

The E500 speeds right up to about 13 to 14 mph quickly, then builds to its maximum speed of 17 mph at a more leisurely pace. Fifteen miles per hour feels faster on a scooter than on an e-bike, but it isn’t all that fast, and I found it easy to maintain in comfort. The super smooth throttle and brake inspire confidence and set the Unagi apart. Many e-bikes have choppy throttles and brakes that seem to slam between all on and all off, which can lead to unexpectedly abrupt speed changes. I also was pleased to find that the solid-rubber-with-air-vents tires did indeed smooth the ride.

As with all lightweight two-wheelers, direction changes are easy — sometimes too easy. Riding in our neighborhood early in my testing, I saw our mail carrier stopped in her vehicle on the opposite side of the road. I smiled and waved, and when I did, I quickly found myself thankful for the Unagi’s antilock electronic brakes because I almost ran into her door. The Model One is perfect as a look-to-steer vehicle, but you have to be ready for it to shift direction with even small body weight shifts. Again, once I was used to the e-scooter’s responsiveness, the Unagi’s solid component structure helped with carving turns and staying precisely on the desired line of travel.

The Unagi Model One E500 is an attractive, stylish e-scooter with an understated appearance — at least with a medium gray finish. Transporting the E500 is a breeze, and its granular controls and solid, responsive ride quickly inspire confidence. This ride performs its design function perfectly. It’s not a high-performance scooter, and would soon be out of its element in almost all off-road situations. But it’s not built to race or ride in the rough. The Unagi Model One is a classy, refined urban commuter. The Model One costs more than you need to spend on an e-scooter with similar speed and range specs, but it’s definitely worth the extra cost. While I had the Unagi, I seriously considered displaying it as art in our home.

There are plenty of fine e-scooters good that will hit 17 mph and go 15 miles. The Razor EX-R Electric Scooter lists for $600 and is often on sale for $500 or a bit less. The Segway Ninebot ES2 Electric Kick Scooter also lists for about $600 with frequent discounts. The Razor and Segway are fine city commuter bikes with range and top speed similar to the Unagi Model One, though they lack its torque and have a reduced load capacity of 220 pounds, to the Unagi’s 275. Consider them acceptable alternatives if you’re on a strict budget, but the Unagi is better overall and worth the extra few hundred dollars.

Unagi sells the Model one with a one-year warranty. During the first three months of ownership, Unagi will replace the scooter with a brand new scooter. For the remaining nine months of the warranty period, Unagi will replace or repair at its discretion. Unagi’s 30-day trial means you can return the scooter undamaged or blemished in its original packing material for a full refund, but you’ll pay shipping. With the Model One’s thoughtfully curated components, we expect you should enjoy the ride for several years.

Yes. If you want a high-quality e-scooter that’s easy to transport and exudes build quality and design elegance (even if you’re the only one who notices), the Unagi Model One E500 is an excellent investment that will take you around town and look good doing it.