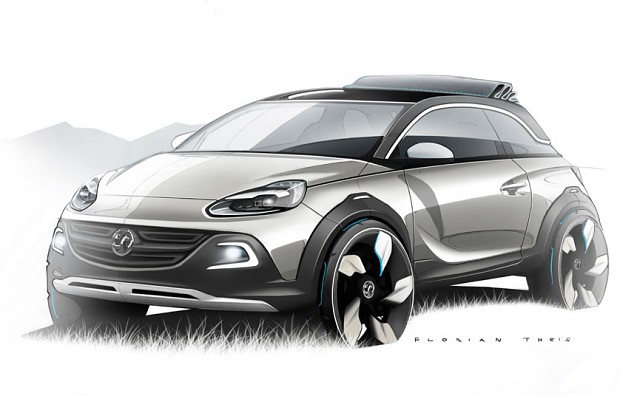 Vauxhall, General Motors’ British division, is a bringing a unique small hatchback to the Geneva Motor Show next month. The Adam Rocks concept is based on the brand’s Adam city car (which it shares with GM’s other Euro division, Opel), but comes dressed to look like an SUV.

It looks like Vauxhall took a page from Audi’s Allroad and Subaru’s XV Crosstrek to make this rockin’ concept. The Adam appears to ride higher in Vauxhall’s renderings, and has much larger wheels with a very technical design. There’s also plenty of unpainted (probably plastic) body cladding to give the Adam Rocks a butch look.

The Adam Rocks needs all the butch visual cues it can get, because underneath it’s actually a small, fashionable city car. It’s normal competition includes the Mini Cooper, Fiat 500, and Citroën DS3, not mud-slinging SUVs and crossovers.

There is still a bit of the city in the Adam Rocks. Vauxhall says the concept was inspired by parkour athletes.

If that’s not enough, Vauxhall also decided to make the Adam Rocks a convertible sort of. Instead of a fully folding roof, it’s roof opens like a Fiat 500C’s. A fabric section in the middle slides back, but the roof rails and rear glass remain in place.

Speaking of Fiat, we know the Italian brand is planning on launching a crossover version of the 500, the 500X. However, it will be a relatively large four-door, and won’t be a convertible.

Mini took a similar approach with its Countryman and Paceman, both of which are much larger than the original Mini, and mostly relate to that car through styling.

Vauxhall is the first to try to literally transmute its small car into an SUV, and the result has a lot more character than either the 500X or Countryman. That also makes the Adam Rocks less practical, but that’s the price you have to pay for looking cool.

If the Adam Rocks makes it into production, it will be a niche model, not a volume-booster like the Fiat and Mini crossovers. That means it will most likely remain a concept.