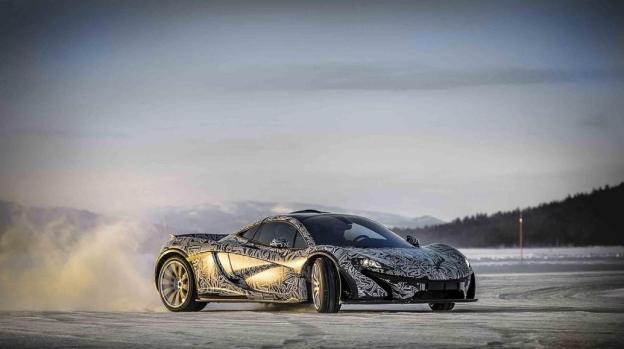 McLaren doesn’t have to prove that the P1 is cool. It’s a 903 horsepower hybrid hypercar with the styling of a starship and built with the knowledge of the company that brought us the F1 and MP4-12C. Still, who wouldn’t want to see this thing power-sliding around the Arctic Circle? We do, so thankfully there’s a kick-ass video as well (see below).

First, a quick refresh: The P1 is powered by a 3.8-liter twin-turbocharged V8 and an electric motor, which gets its juice from a 324-cell lithium-ion battery pack. It’s top speed is 217 mph, but it can also travel at slower speeds on electricity alone (for up to 6.2 miles).

Still, McLaren has to make sure this impressive tech actually works in the real world, and they’re doing their due diligence.

Hence the camouflaged P1 drifting on a snowy test track in Sweden. It’s undergoing cold weather testing, to see if the components are durable enough to take the abuse of sub-freezing weather.

Many carmakers send their products to extreme climates for testing, but somehow it’s just more entertaining when the product in question is a 903 hp hypercar.

McLaren is also using this trip to Sweden to fine tune the P1’s traction and stability control systems.

After it returns from Sweden, the P1 will make an appearance at the Goodwood Festival of Speed in July, with deliveries to begin shortly after that.

McLaren will build 375 copies of the P1, at an estimated price of $1.3 million each, so reserve a few today.

If you aren’t a robber baron, you can at least enjoy this video of the P1 doing what it does best: being awesome.

Lamborghini brings back a legendary supercar as an 803-hp hybrid

Porsche will use discarded F1 tech for a new hybrid supercar, report claims