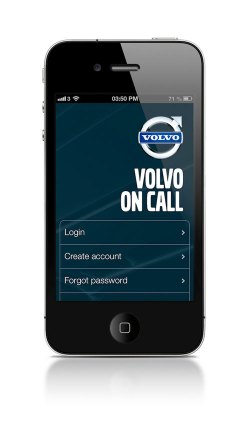 Some good news from Volvo this morning, the Swedish automaker announced it will release a smartphone connectivity app dubbed “Volvo on Call.”  With the introduction of a new remote access app, Volvo finally takes its place alongside the likes of Ford, General Motors, and Mercedes-Benz in the modern automotive world. The bad news: It’s not yet available in the US. Nevertheless, it’s a pretty cool app so here’s a quick rundown of  its features in hopes Volvo will deliver it to US drivers later this year.

Volvo On Call at its basic level offers a number of services that similar apps from rival automakers already provide. Users can remotely lock and unlock their vehicle, pin their vehicle location on a map so they can locate it later, and have access to a number of performance metrics. These include the ability to verify fuel levels, look at average fuel economy numbers, and access odometer readings. Interestingly, owners can also monitor vehicle fluid levels, including: washer fluid; brake fluid; oil; and coolant. Also, the app will alert a user if a vehicle bulb fails.

Where Volvo separates itself from the rest of the automaker app market is with its business bent. The app offers an advanced driving journal, detailing the last 40 days of driving info, which are available for download. These precise Excel files will read out speed and fuel economy in addition to a vehicle drive route with Google Street View. We’d think this feature great if it didn’t have a creepy Big Brother whiff to it.

Volvo also offers dozens of other exciting features for the V60 Plug-In Diesel Hybrid, which, too, is not available Stateside.

Volvo recently announced a partnership with Ericsson to develop an all-new infotainment system. While the two companies were short on details, we presume the Volvo On Call app will certainly expand in the next few years as soon as the new Ericsson cloud-based system is launched. When that happens, we’ll be sure to bring you more.

Wait until July 12 to buy a Ring Video Doorbell (seriously)