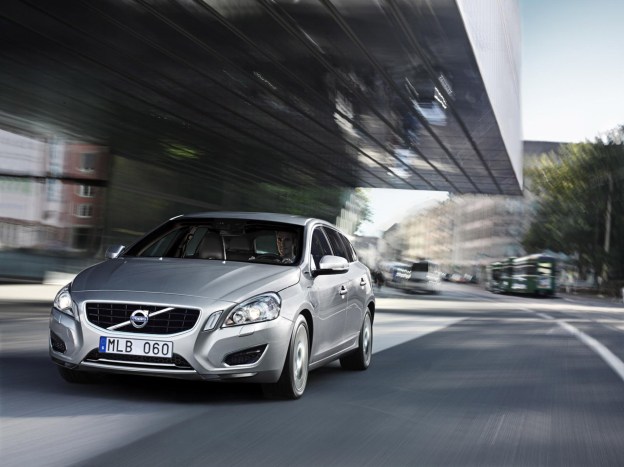 As the world’s first production diesel plug-in hybrid, the Volvo V60 D6 AWD Plug-In Diesel Hybrid (or V60 PHEV, for the less pedantic) is already an impressive piece of green engineering. For the car’s United Kingdom launch, Volvo is sweetening the deal with a specially tailored version of its On Call smartphone app.

The V60 PHEV is based on the wagon version of Volvo’s mainstay S60 sedan. The powertrain consists of a 2.4-liter five-cylinder turbodiesel engine that sends 215 horsepower and 324 pound-feet of torque to the front wheels, while an electric motor sends 70 hp to the rear wheels, making the car all-wheel drive.

With an 11.2-kWh lithium-ion battery pack, the V60 PHEV can travel up to 31 miles on electricity, before the diesel kicks in.

The V60 PHEV joins the Peugeot 508 HYbrid4 and 3008 HYbrid4 in the very exclusive club of diesel hybrids (the Peugeots are not plug-ins). Other companies have shied away from diesel hybrids because compression ignition engines add cost, and because, unlike high-revving gasoline engines, they can’t provide high speed power to complement an electric motor’s low-end torque.

To help owners get the most out of their plug-ins, Volvo has added features to its On Call app designed specifically for the V60 PHEV. Drivers can set an alarm that reminds them to charge their car, or check the battery’s level of charge at any given time. The app can also alert the V60 driver if charging is unexpectedly interrupted, and preset the car’s climate controls before he or she gets in.

Another function, available on all Volvo models, should help hyper-milers. A driving journal allows owners to download trip information, including speed and fuel or electricity consumption, from the past 40 days of use, and even convert it into an Excel file. It could be a good way to pick a fuel efficient route.

If an On Call user forgets where he or she has been, they can also review recent drives with Google Street View.

That might be just as well, though. The V60 PHEV may be very green and very high tech, but it’s also very expensive. European customers are paying between $75,000 and $80,000 for their plug-in diesels.