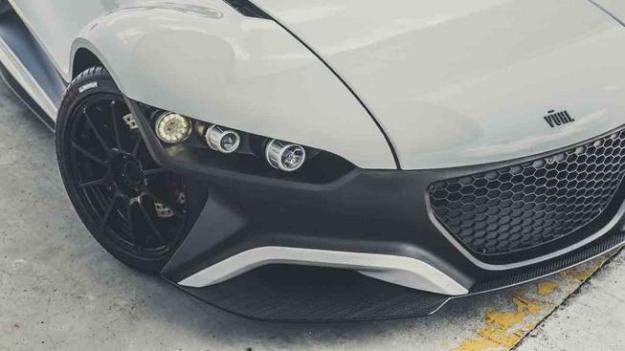 If you’re going to buy a brand new type of car, why not buy it from a brand new car company?

Purpose-built track-day cars like the KTM X-Bow (“Crossbow”) and BAC Mono have become popular among people who wear helmets a lot. They’re designed for maximum driving fun on the track, but they’re singular designs mean they are completely impractical on the road, and can’t easily fit into racing classes.

Into this embryonic niche comes VŪHL (pronounced “vool”), which plans to put its own spin on the track day car.

VŪHL’s first car, laconically named the “05,” will debut at the Goodwood Festival of Speed in July. Until then, its maker is keeping the details under lock and key. The only concrete fact that’s been released regarding the 05 is that it will wear Michelin tires.

VŪHL says the 05 will be a “premium” vehicle, which is hard to believe considering that track-day cars, by definition, are stripped-down and spartan, with fewer luxuries than some motorcycles.

Not much is known about the company itself, either. VŪHL, which stands for Vehicles of Ultra High-performance and Light weight, but the construction of the 05 promises to be quite an international effort.

The company itself was started by brothers Iker and Guillermo Echeverria, with money from private investors and the Mexican government. VŪHL says automotive heavyweights like Magna Steyr and Ford were involved in the 05’s development.

The 05’s body will be built in Canada, while the chassis will be constructed in Mexico City.

Check back here for more details as the VŪHL 05’s Goodwood debut approaches.