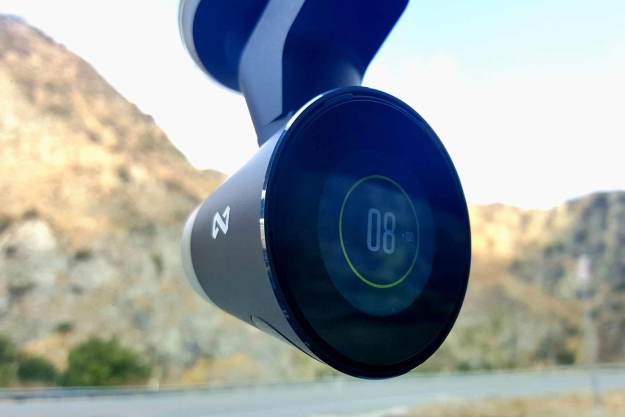 The Waylens Horizon camera made automotive enthusiasts run to their keyboards to contribute to its Kickstarter campaign in October 2015. The basic idea was a dash camera on steroids that can record your driving and display stats like G-forces, speed, engine rpm, boost pressure, and much more. What more could you want?

The campaign flew past the $55,000 goal to reach an astounding $606,662 in total donations. But can this camera system live up to the incredible hype? Or will you need to find a better way to show off your automotive exploits?

To make this system work, several components act in tandem. In the box you will find the Waylens Horizon cone-shaped camera, finished in a darker gray metal. On the smaller side of the cone, you find the camera lens with f/2.4 aperture and 157-degree view range. On the opposing side is a beautiful OLED display screen. The camera comes with one automotive mount for the windshield and a second USB adapter mount for viewing the footage on your PC. To grab all the vehicle data from the car, you get an OBD-II transmitter, which is compact and has a white LED to let you know it is powered on when plugged in.

The kit comes with a remote control with a rubber strap to fasten it to your steering wheel. This remote allows you to “star” or save a specific clip so that the camera does not overwrite that particular portion of video. To keep it all connected, the kit includes one 13-foot USB cable to power the device in the car and another 4-foot cable for PC connectivity.

The mount attaches to the windshield with the use of a adhesive suction cup. Then the Waylens Horizon camera connects to it by a locking mechanism that is rotated to keep it both steady and in place. We had issues with movement in the mount and found that the locking mechanism still gave far too much play, allowing vibrations and noises to show up on the video. The suction portion of the mount also began to come unattached after mounting and removing the system from a few different vehicles during testing. This may have been a rare case, but these are simple issues you wouldn’t expect from a $450 device. Also, the system requires a MicroSD card that is not included before you set off. If you purchase your own card, be sure to keep it under the 128GB limit.

One of the primary uses Waylens shows in its videos is capturing a vehicle off-road. We tested the system in the 2017 Jeep Grand Cherokee Trailhawk at a local drive event to highlight “Pitch and Roll” data from the camera. We quickly learned for this first trip that even with the OBD-II transmitter connected and paired through Bluetooth, the system will not show data if the device is not plugged in. When plugged in, pairing both the OBD-II and remote is as simple as swiping up on the OLED display and quickly accessing Bluetooth setting. Even without data from the ODB-II the Waylens Horizon can display the G-forces and items like Pitch and Roll for times when you want to go on battery alone.

The camera shows great promise but doesn’t deliver with this initial offering.

On our drive in the Jeep the battery lasted well over 30 minutes and matched the battery life of most dash cameras we have tested. In footage we captured, the system display gives a good idea of the angle and forces acting upon the Jeep while off-road. The default view on the OLED screen shows the video footage but swiping right to left will cycle through various gauges. It was nice to have the pitch and roll up while driving to see real time data, in addition to the recording. It’s something off-roaders will really appreciate. The video itself was clear — the camera can record at 1080p and 60fps — but when filming in high sunlight, the lens creates a halo effect that we have not seen on other dash cameras.

For our second test, we hit some backroads with the Fiat 500 Abarth Cabrio to see performance data like the Boost, rpm, and G-force gauges. With the mount plugged into the 12V power source and the OBD-II transmitter connected, you will get a visual indication on the Waylens camera when the transmitter connects via Bluetooth. In the video clips, you can see the stunning video quality and various gauges can be shown or hidden on the video output via the mobile application or desktop client.

At speed, the vibration in our footage was quite noticeable. Your  experience may vary, but we had continued issues with the suction mount and locking ring. At times we felt it locked in and was steady but for most of our drive up the canyons, the Waylens mount pivoted more than you would get from a standard dash camera or action camera like a GoPro. The remote was handy for saving the best clips from our drive. A visual “Star” indicator appears on the Waylens OLED display when a clip is saved. The only downside to saving a clip is that the audio of a camera shutter that indicates to the driver that a clip was saved is included in the footage, and can be distracting if you are trying to capture audio on your drive clip.

The Waylens Horizon can connect to a fantastic mobile application to control the camera and share footage. The application is available for Android and iOS and is simple to set up as you simply connect to the Waylens Wi-Fi connection and the camera view will display on your device. From the main screen you can view the camera footage and start/stop the recording and even “star” to save the current clip. The Waylens system has two different formats for the vehicle data and you can switch between different formats or decide to only show certain gauges at different sizes on a particular clip.

With the Waylens application, you can also view footage you just captured and even share it directly to YouTube or Facebook. The Waylens application even has its own feed to view shared footage and post your latest clips. When sharing your video it will allow you to tag location and even pull the vehicle information from the OBDII for you to share that info with the Waylens community. Within the application, you can even edit the length of the clip, add music over your clip, or add in additional clips to extend your video. This level of editing and sharing capabilities within a mobile app is fantastic and not seen in any other dash camera or action camera applications.

There is also a desktop application with some additional features for both PC and Apple. The Waylens system has a dock for plugging the system in via USB to your computer and the clips appear within the desktop client. The desktop application has similar features to the mobile app but allows things like exporting the video to your PC in mp4 format to share or distribute however you like. The MicroSD card itself has video clips without the data overlay and the mobile and desktop clients are the only way to modify how that vehicle data is displayed on your clips before you export them.

In the end, the Waylens Horizon is an amazing concept that delivers on most of the features it originally claimed. The biggest fault that truly kills a tremendous product is the lack of quality from the mounting solution that they chose to include. With slight updates, like the one currently in beta that displays performance specs, and a more rigid mount, the camera could be a winner.

The best thing that the Waylens Horizon has going for it at the moment is that there simply is no other alternative for what the camera offers. The data overlay on the video is unique and you won’t find it anywhere else.

With successful Kickstarter campaigns, there are always copycats but Waylens is the first out the gate and with frequent updates the system will certainly be the product to beat.

No. There is a lot to like in this first version, but ultimately, it falls flat in some major areas. The UI and experience is great and with slight tweaks, the product will be a must have for any automotive enthusiasts. But at the moment, we would hold out until there’s a better mounting system.