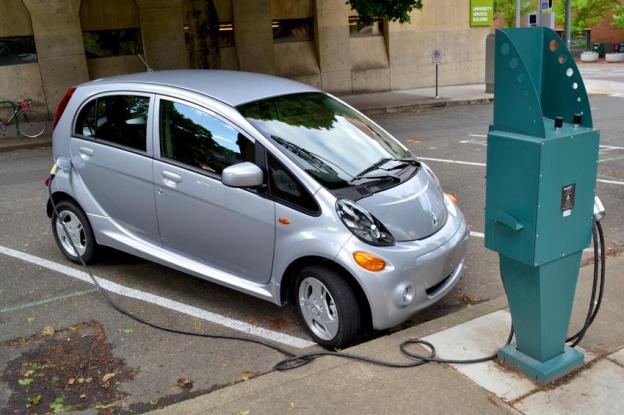 Limited range and lack of available charging stations have hampered electric vehicles so far, but the federal government and several companies are trying to change that. In a speech at the Washington Auto Show, Secretary of Energy Steven Chu announced the Workplace Charging Challenge, an initiative created to get employers to install EV chargers at their businesses.

The goal of the Workplace Charging Challenger is to get employers to increase charging station availability tenfold over the next five years. It’s one component of the Department of Energy’s (DOE) EV Everywhere Grand Challenge, announced by President Obama in March 2012. The Grand Challenge is a comprehensive effort to make EVs as affordable and convenient as gasoline-powered cars within the next ten years.

So far, 13 companies have accepted the challenge. Among them are tech powerhouses Google, Siemens, and Verizon, 3M, and energy company San Diego Gas & Electric.

Several car companies were also represented, including the American Big Three. Not surprisingly, Nissan and Tesla, the two carmakers with the biggest stake in the success of EVs, are also part of the effort. Nissan launched the current wave of practical EVs with the Leaf, and Tesla builds EVs exclusively.

Nissan and Tesla are also busy with their own efforts to improve the EV charging infrastructure. Tesla already has several “Supercharger” fast charging stations in California and on the East Coast. Nissan is building its own network of fast charging stations; it hopes to have 500 installed over the next 18 months. That includes 40 stations in the Washington, D.C. area, according to the company’s Washington Auto Show press materials.

“These 13 companies are taking strong steps to make charging infrastructure more broadly available to their workforce – setting an example for others to follow and helping America lead the global race for a growing industry,” Secretary Chu said.

The effort won’t just benefit drivers of electric cars. Drivers of plug-in hybrids can use charging stations to extend their cars’ battery range.

“Since the introduction of the Chevrolet Volt, we have made a commitment to lead by example on workplace charging and to engage in encouraging other companies to help provide the infrastructure supporting the electric vehicle market,” Mike Robinson, GM vice president, sustainability and global regulatory affairs, said in a statement. “With 239 workplace charging spots for the use of GM employees to charge their personal plug-in vehicles, we are primed to meet this challenge.”

In addition to increasing workplace charger availability the EV Everywhere Grand Challenge will attempt to create a standardized set of codes for charging infrastructure, including the chargers themselves and how they interface with the grid.

Vehicle performance is also being targeted. The DOE hopes to improve battery efficiency with “Beyond Li-ion” technologies, such as lithium-metal, lithium-sulfur, and lithium-air. Over next ten years, it also wants to lower chassis weight by 25 percent, body weight by 35 percent, and interior weight by five percent.