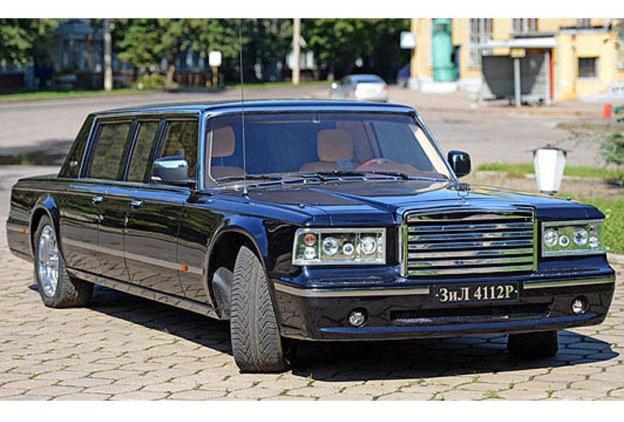 In Russia, one carmaker is still fighting the Cold War. ZIL, maker of the giant limousines that ferried Soviet dictators from military parades to their dachas, is seeking to update these relics of history. The company’s new model carries the appropriately bureaucratic name ZIL 4112-R.

If you’re old enough to remember the Cold War, you may have seen the 4112-R’s predecessor ferrying Brezhnev, Andropov, or Gorbachev around. As an arm of the Soviet state’s centralized economy, ZIL (as ZIS, or “Stalin Works” before 1956) built trucks for the Red Army, and was the preferred ride of all Soviet leaders from Stalin on down.

The ZIL 4112-R, then, has a history that most executives would not include in glossy brochures. Yet, despite ending production in 2002, ZIL sees a new market for these gargantuan limos. Maybe the company hopes to cash in on the retro ‘80s craze.

Other than the Brezhnev seal of approval, the ZIL limo does not have much going for it. The company says the 4112-R combines the traditional look of Cold War-era ZILs with updated mechanicals, but that isn’t saying much.

The old 7.7-liter V8 now has fuel injection, giving it 400 horsepower, 85 more than the old model, and is connected to an American-made Allison five-speed automatic transmission. That’s the same transmission General Motors offers in its heavy duty pickup trucks.

ZIL says, despite the extra, power, the new limo’s top speed is still limited to about 120 mph. That’s not bad, considering that the 4112-R weighs 7,700 pounds.

Naturally, this Commie cruiser is weighed down with luxury. It seats six: two in front, and four in back in two rows of facing bucket seats. The rear passengers enjoy Learjet-like amenities, including tray tables and a wood-covered overhead panel with vents and lighting. Other perks include privacy curtains and a built-in champagne cooler.

That classic styling gets some slight updates in the form of new headlights and taillights, as well as less chrome trim. The ZIL still brings new meaning to the phrase “designed by a committee.”

The ZIL 4112-R is an impressive chunk of Russian luxury, but isn’t reintroducing it to the post-Cold War world a bit distasteful? No one wants to be reminded of the brutality of the Soviet regime.

Still, ZIL says its reborn limo has a purpose. The Russian government wants Russian cars for its official fleet; it’s a matter of national pride and the same reason American Presidents cruise around in Cadillacs.

Since the end of the Cold War, Russians have tried to separate their history from the history of Soviet rule. Is the ZIL a Soviet or Russian icon? Its maker is betting that it is the latter, and that this titanic limo can shed its unpleasant past.

Nissan wants the 2023 Ariya to be its comeback EV, but the bar has been raised
We need more 7-passenger EVs, but the 2023 Mercedes EQS SUV has room to improve
2023 Audi Q4 E-Tron first drive: the predictable and traditional EV SUV we need
Lux and refreshingly livable, Mercedes’ EQE moves EVs mainstream
Uber says it’s investigating ‘cybersecurity incident’
Nvidia’s Drive Concierge will fill your car with screens
The Uber hack is an outrageous tale of a teen hacking for fun
Tesla to fix window software on 1M of its U.S. cars
How to watch Tesla’s AI Day tonight and what to expect
Tesla AI Day 2022: Optimus, self driving cars, and everything else announced
Tesla hopes full self-driving beta will be out globally by the end of 2022
Elon Musk reveals first delivery date and customer for Tesla Semi truck
2023 Kia Niro EV first drive review: Practical doesn’t have to bore you to tears