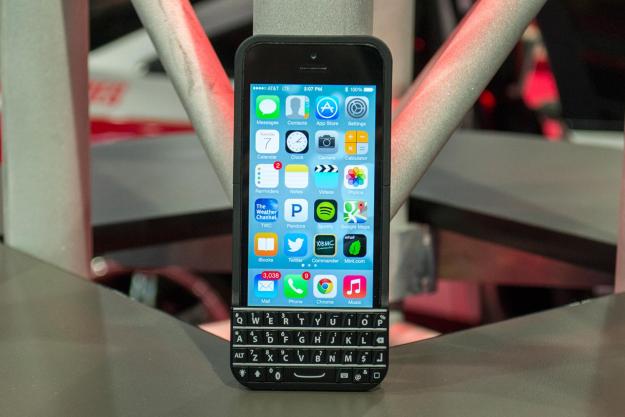 “The Typo keyboard is a great idea, but in its current form, typing on it is more stressful than putting up with the iPhone’s cramped touchscreen.”

Typing on the iPhone isn’t fun. We’ve all gotten used to it, but its screen is exceedingly thin and even the best thumb typers make a lot of mistakes. Flip phones weren’t any better with their T9 screens, but before the iPhone shifted the smartphone market toward touch, many high-end phones had BlackBerry-style physical keyboards. Ryan Seacrest misses those days. To bring back the past, he helped raise money, start a company, and create the Typo. It’s a case for the iPhone that adds a full QWERTY keyboard to Apple’s buttonless screen.

We’ve been using the Typo on and off for a few weeks. It slips onto your iPhone in two pieces, like many cases, and the keyboard covers up your Home button, giving you a very long iPhone.

I like keyboards, and still lament the day I had to give up the nice slide-out QWERTY on the original Motorola Droid, but the Typo isn’t for me. It’s a solid little keyboard in many respects, and possibly the thinnest keyboard attachment I’ve ever seen, but it has a few nagging issues.

Pairing the Typo via Bluetooth was easy enough, but it’s difficult to get used to not having a Home button, which the Typo covers. The first time I tried to pair it, I already had it on the iPhone, which rendered me without a Home button at all.

After some investigating, I discovered that there is a small Home button on the Typo, but it’s a tiny little button in the lower right – no bigger than any other key. I’d often forget where it is, or press the wrong button in a pinch. You press the Home button more than almost anything else on an iPhone. Optimally, a keyboard like this needs to incorporate the Home button into a more prominent, easy-to-press, space.

If Apple’s touch keyboard is tough to type on because of its size, then the Typo is maddening. Because it attaches to the bottom of the iPhone in vertical orientation, it’s still cramped in by the thinness of the iPhone. The buttons are very small, and very plasticky. The keys have a snap like a BlackBerry keyboard has, but without a little more width to spread the keys out, it’s difficult to type accurately. Ironically, using the Typo lead to a dramatic increase in my own typos.

Because the Typo attaches to the bottom of an already long phone, when you type, the device is very top heavy, which could lead to some falls.

Perhaps the worst part about the Typo (at least in its prototype phase), is that you have to charge it separately from your phone. Unlike a Mophie Juicepack-like case, the Typo doesn’t plug directly into your Lightning connector. Instead, it runs on its own internal battery for power. My unit came with a very cool charging cable that could convert between a Lightning charger (for iPhone) and Micro USB (for Typo), but the cable didn’t allow you to charge both your keyboard and phone at once.

Without a way to dual-charge, there’s a good chance you’ll forget to top off your keyboard and it will die on you in the wild, leading to a particularly nasty situation where you’d have to revert to touch typing.

It’s just not there yet

I’d love a good physical keyboard for the iPhone (or an Android), but the Typo isn’t it – at least, not yet. If it could charge with your iPhone, had a better place Home button, and a little more breathing room around the keys, it might be worth the investment, but for its planned $100 price, only die hard keyboard lovers with a lot of disposable income should dare. The Typo will be available beginning Jan. 13.

Video-editing app LumaFusion to get a Galaxy Tab S8 launch
This reliable leaker has some bad news about Apple’s M2 Pro chips
This half-sized micro-keyboard is a dream come true for PC gaming on the go
Apple finally allows you to repair your own MacBook
Alienware’s new gaming monitors come with a retractable headset stand
New VESA display standard makes it easier to pick a monitor
Developers help older Macs do something Apple won’t allow
AMD and Asus team up to make Zen 4 overclocking a breeze
HP unveils new IPS Black monitor with one key new feature
Nvidia CEO promises RTX 30 price cuts as RTX 40 is just around the corner
AMD is ready to battle Intel with next-gen 3D V-Cache CPUs
Corsair’s Xeneon Flex is the ‘bendable’ OLED monitor we always wanted
Samsung reaches new heights with this SSD, but it could go even higher