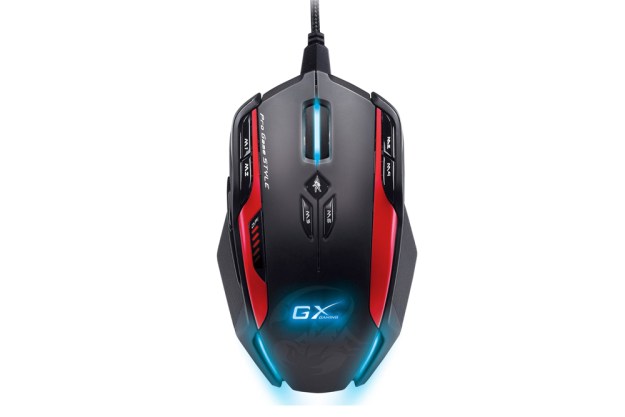 “Genius hasn’t defeated Razer, Logitech, and other enthusiast favorites, but it can stand beside them.”

You probably haven’t heard the name Genius much in the world of gaming peripherals. Though not a new company, Genius has never been well known in North America and is just now making a serious push into the gaming market. Genius joins companies like Corsair and Cooler Master in challenging veterans such as Logitech, Razer, and MadCatz, and giving gamers more choice than ever before.

Genius, aware of the war waged for gamer’s hearts and wallets, has crafted a focused peripheral that makes no apologies and cuts no corners. Everything we could want is here, including a high-DPI sensor, on-the-fly sensitivity adjustment, numerous buttons with macro support, slick LED lighting, and even built-in memory that stores your settings (so you don’t have to re-adjust the mouse when you plug it in to a different PC). The insane feature set earned the mouse a CES Design And Engineering Award at CES 2013.

Even more impressive is the price. Though the MSRP is $100, which would be fair for a mouse with these features, the Gila GX can be purchased through Amazon for close to $75, and can be found on sale at other retailers for even less. Let’s see if Genius can compete with gaming’s old guard.

Gaming mice are known for their flair, but the Gila GX takes it to an extreme that’s rivaled only by Razer. There are no less than six individual LED-lit areas on the mouse – not including the sensitivity indicator – and even more sharp edges. The mouse even has a scorpion logo plastered on its rump (‘cause it’s just that bad ass).

All of these bumps and ridges risk coming across as cheesy, but the Gila has the build quality to back them up. This is a tight, compact, robust mouse. Though made entirely of plastic, like most mice, there’s no flop or wiggle to various panels and details. Every button feels well-sprung and the scroll wheel moves with a satisfying thunk-thunk-thunk that’s both reassuring and perfect for weapon-selection in shooters. The Gila is a hefty piece of kit, as well, even without the optional weights added.

While the engineers obviously thought about quality, they could have thought more about ergonomics. Subjectively, we found the mouse to be a bit too small and too tall for our hands. Long usage sessions gave us a mid-palm cramp that we’ve experienced with other mice of similar size.

Other issues were less subject to taste. The Gila’s many stylish edges and humps became uncomfortable as they brushed across and dug into our palms. This problem was most obvious when playing games that required a lot of fast movement, which encourage a tight grip on the mouse itself.

One of the Gila’s standout features is an 8200 DPI sensor with on-the-fly adjustment. Sensitive sensors are common on gaming mice, but 8200 DPI puts the Gila in the company of extreme products like the Mionix Naos and Roccat Kone. Only Logitech’s recently introduced G600 offers equivalent sensitivity at a lower price.

A sensitive sensor is great for the most hardcore gamers, but those who don’t make money from tournaments will find the mouse too touchy. This is addressed by the Gila’s 6-mode sensitivity button. In a shooter game, for example, we found the Gila’s highest sensitivity far too touchy for lining up a headshot. We were able to fix the problem by lowering the sensor’s sensitivity, yet we could crank it up if we had to whip around to fight an ambush.

While we like most of the options made available by this mouse, we’re not crazy about one feature called Angle Snapping. This feature allegedly flattens jerky motions at high sensitivity to help with accuracy in games. We didn’t notice an improvement in-game with it on, however, and the feature seemed to make movements in the desktop environment less accurate than normal. Fortunately, the Gila’s driver software provides the option to turn off Angle Snapping.

There’s plenty of customization offered here, but most must be handled through a custom software interface bundled with the mouse. Poor implementation could shoot the Gila dead – thankfully, it dodges the bullet.

Genius crafted a focused peripheral that makes no apologies and cuts no corners.

The software is okay. It’s nothing special; it’s just there. But competitors in this space have a nasty habit of botching this rather basic feature with software that is unstable, slow, or confusing. The Gila suffers from none of these problems. It offers access to all features in a reasonably quick, intuitive interface. Only the Macro settings menu is a bit fuzzy, but we’ve yet to see a macro interface in any software that’s not a little confusing.

And then there’s the lighting menu. Gila’s LEDs are broken up into three zones, each of which can be customized to display one of 16 million sRGB colors. Users can adjust light intensity or make each lighting zone pulse at one of three speeds.

A mouse is an item that may be used for hours at a time, so it should be smooth, comfortable, and easy to handle. The Gila proved a bit too harsh and heavy to win over our palms.

Button placement is another concern. Genius bills this mouse as suitable for MMOs, but several buttons are awkwardly placed. Razer’s Naga and Logitech’s M600, both of which put buttons under the user’s thumb, are easier to use.

As a general gaming mouse, however, the Gila is a decent choice. The features offered, from 8200 DPI sensor to built-in memory, are excellent for a mouse that sells for $75 or less online. Competitors that offer everything found on this mouse cost at least as much, if not $15 to $25 more. Yet, going for the inexpensive Gila doesn’t require a sacrifice in build quality. This thing is built like a tank.

Genius hasn’t defeated Razer, Logitech, and other enthusiast favorites, but it can stand beside them. The Gila GX is worth consideration by any gamer looking for the ultimate mouse.

These three Persona classics are headed to Xbox and PC

Forza Motorsport is getting a reboot, but it’s not coming this year