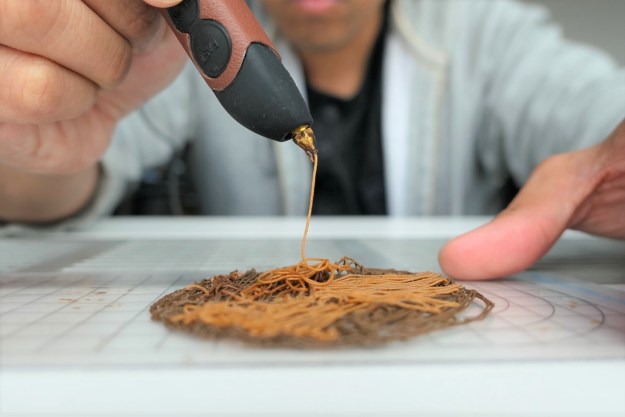 “The 3Doodler Create+ brings wood and plastic 3D creations to the tip of your pen.”

3Doodler has been running on high ever since the surprising success of its Kickstarter campaign back in 2013, delivering an affordably priced 3D printing pen for the masses. There have been several iterations of its 3D printing pen since then, like 3Doodler 2.0 in 2015 and the 3Doodler Create+, but the core idea has remained unchanged.

The company struck a chord with educators, thanks in part to how the 3Doodler is marketed as a creative tool for various STEM (science, technology, engineering, and mathematics) classes and activities. Following in the same footsteps as the 3Doodler 2.0, which marketed itself more to enthusiasts and professionals, the company’s latest model, the 3Doodler Create+ Leather Edition, is being penned as the executive office pen that just happens to handle 3D printing. Is it the one true 3D-printing pen to rule them all?

Looking at 3Doodler’s existing lineup of 3D printing pens, it’s obvious that the designs are geared to youths. They’re simple, straightforward, and are designed for the task at hand of drawing in 3D. With the Leather Edition, however, it’s evident that it’s trying to attract enthusiasts who are more serious about 3D drawing — those who have creativity talent.  Similar to the 3Doodler 2.0, which featured an aluminum enclosure, the Leather Edition adds the same level of sophistication with its Whiskey-tanned leather exterior.

Now, as much as the company is claiming a sense of refined elegance with its new 3D-printing pen, the leather merely adds to the aesthetics more so than its utility. At the end of the day, it still looks and feels more like a crafting tool as opposed to this high-end handwriting instrument.

Fundamentally, it’s similar to its predecessors by melting the same plastic filaments (FLEXY, ABS, and PLA) to draw on surfaces and ‘in the air.’ New to this model, it was designed specifically to work with wood filaments — whereas the previous ones weren’t necessarily intended for wood. The Leather Edition was optimized from the ground up to work with wood as its primary filament.

The wood adds to the variety that the pen is accustomed to having, giving projects a more natural look. They’ll complement the decor and other knick knacks you may have lying around in the home, but you’ll have to go through some trial and error before really getting a good feel for drawing with wood.

We tried crafting some wood creations with the included project guide, which provides first timers tips on how best to use the 3Doodler. There’s definitely a learning curve if you’ve never used one before, and in fact, we found it more of a challenge finding the correct pace to write in order to get the best results. Move too quickly, and you’ll get thin pieces of plastic that won’t add any structural support to your creations, while moving too slowly will result in thick clumps.

Unlike some of the plastic filaments, which cool relatively fast upon extraction to allow drawing in the air, the wood filaments don’t harden instantaneously. After mastering the technique, we were able to use the 3Doodler Create+ Leather Edition to make a few crude creations. We recommend using the matte side of the included Mini DoodlePad Surface, mainly because the wood filaments are easier to peel off. If it weren’t for the step-by-step wood project guide, we would’ve been totally clueless about how to best use the 3D printing pen. We used it to make a money clip and a wood coaster.

For simple all-wood projects, they start out as 2D creations. From there, more complex projects involve welding 2D pieces together using the 3Doodler until you achieve your desired shape. In our situation, we made a model of the Eiffel tower by fusing 2D pieces of the glossy PLA filaments that came with the packing, and then proceeding to add additional detail and support using the wood filaments. What’s nice is that all the filaments fuse nicely with one another.

In order to keep the 3Doodler in tip-top condition, it requires frequent upkeep by ensuring that filaments are completely removed after each use. You don’t want to have it sit idle for a while with the heated filament in the nozzle cooling off, so ensuring that all of the material is ejected is crucial. Releasing the unused filament is an easy process because you can just double press any of the two buttons to reverse it, rather than forcibly removing it by pulling.

For advance users, the Leather Edition also comes with a nozzle set, which contains 6 other heads for even more variety with how the filaments come out of the nozzle. They’ll help to enhance projects with the various patterns and thickness levels they provide. Even though our particular creations appear crude, these nozzles can help to add more precision and cleaner finishes for those who can master its drawing techniques.

The 3Doodler Create+ Leather Edition will set you back $120, which is $40 more than the current 3Doodler Create+ 3D-printing pen. It’s worth mentioning, too, that this is the first time that the wood filament packs and the nozzle set are being included in the packaging. While the thought of a 3D-printing pen still continues to draw attention for allowing people to draw in the air, the 3Doodler Create+ Leather Edition still remains as an artistic tool for those who are serious about their creations. You won’t make anything elaborate or ornate, but at least you can create some unique handmade ornaments with a personal touch to them.

If you’re strapped for cash, there are several lower cost alternatives available through retailers like Amazon. You could pick them up, but 3Doodler has built a solid reputation and ecosystem in supporting its lineup through the years.

Frequent maintenance is necessary to keep the 3Doodler Create+ Leather Edition functioning properly, but it does come with a one year warranty.

Unless you have some artistic background, it’s unlikely that you’ll use it religiously. If you do, then it’s an option worth thinking about because of all the possible creations using the plastic and wood filaments that are at your disposal. Plus, you can explore the different varieties of filaments and project ideas on 3Doodler’s site — saving you some of the hassle of having to reorder filaments and getting inspired for your next project.  There’s already the 3Doodler Start 3D-printing pen geared for youths and educators, but the refined look of the 3Doodler Create+ Leather Edition positions it as a tool for enthusiasts who are willing to take the time to master the techniques needed to create pieces of art.

AMD Ryzen 7 5800X3D shines in gaming benchmarks, beats Intel
AMD Ryzen 7 5800X3D just beat one of Intel’s best gaming CPUs
AMD Ryzen 7 5800X3D scores are in, but don’t trust them yet
AMD Ryzen 7 5800X3D beats predecessor, but AMD promised more
AMD Ryzen 7000: Everything we know about Zen 4 CPUs
Apple’s October event may have been canceled before it began
Developer says it can turn your AMD 6800 XT into an Nvidia 3090 Ti
Best MacBook deals and sales for September 2022
Best gaming chair deals for October 2022
This new Windows 11 feature will help you protect your passwords
HP flash sale: Pavilion x360 2-in-1 laptop just got a $130 price cut
Save $550 on this HP gaming PC with an RTX 3070 today
Hurry — Dell XPS 13 is $550 off in Dell’s monster clearance sale